Last week’s controversy in higher education provides yet more evidence of a long-held thesis of mine: some of the most deeply stupid and sinister people in this country have PhDs in the social sciences. It’s necessary to add, dispiritingly, of course, that I’m likely to be correct about this for a very long time to come. Ageing Marxist supervisors and millennial lackeys seem to get along just fine, which is another way of noticing that leftist mania in the academy naturally desires to spawn leftist mania in others. It’s hardly surprising, then, to find the current crop of doctoral candidates quite keen on enrolling in the revolutionary struggle.

To remove any lingering doubts about my thesis, allow me to introduce a PhDer from Sydney    University, Jay Tharappel, who recently went off for a jaunt around North Korea and wrote about his experience for the university magazine, Honi Soit. Sure, North Korea is a totalitarian slave state with gulags and whatnot, but none of that prevented young Tharappel from having a dashed good time.

Indeed, Comrade Jay finds in North Korea “a highly organised, egalitarian and energised society”, which he certainly thinks much preferable to the liberal, democratic and capitalist alternatives in the West. He especially likes Pyongyang’s education system, which brainwashes the youthful inmates into loving the Dear Leader and nothing else. As for the police state methods of totalitarian control, Tharappel can find nothing too objectionable. The struggle against US imperialism, you see, can justify almost any kind of barbarism. He writes:

A country that endeavors to credibly stand up to the United States must necessarily be authoritarian for the simple reason that they are a nation at war, and cannot be one where the       population are timid, beaten, and demoralized.” (my emphasis)

After chatting to the locals, as all decent travel writers must do, Tharappel concludes that the North Koreans love their chains, and why shouldn’t they? Like the New York Times‘ Walter Duranty filing nothing but hero-grams about the Soviet Union while millions starved and Stalin purged, or any other useful idiot’S subsequent shilling for foreign despotisms, Tharappel appears to believe he has found the real communist utopia:

The state believes that it has a civilisational mission to complete . . . Their slogan is, “we envy nothing in this world,” and that seems to make perfect sense when you look around.

Reading this, one might conclude that Tharappel’s nine-day trip was much too short. No doubt he wishes he could stay on a more permanent basis, and this is an idea I cheerily endorse. Not, I hasten to add, in a prison camp. A propagandist of Tharappel’s skill is wasted in postgraduate studies; surely, he would find a better fit as a commissar of correct thinking in Pyongyang’s Ministry of Information.

There is a good deal more agitprop in Tharappel’s fetid article, but I think the examples above adequately demonstrate 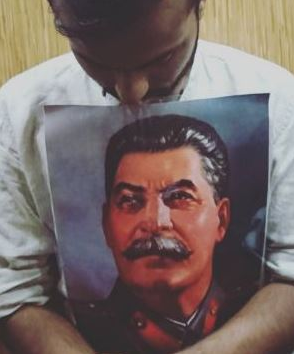 that he is a front-line combatant in the world’s army of useless idiocy.  Tharappel’s affection for totalitarianism opens him to the charge of Stalinism, but I fear he would take that as a compliment rather than an insult. A social media profile picture features Tharappel (at right) staring admiringly at a portrait of the man of steel himself, who, let us not forget, was responsible for the deaths of millions. Tharappel will have none of this,      writing moistly of his hero that “Most of the charges against him are exaggerated or false.” And yeah, those pesky Kulaks had it coming, anyway.

How does one acquire politics such as this? What compels one to do pro bono PR for the North Korean regime?

Well, an education at Sydney University helps out, for sure.

Until recently, Tharappel was a tutor in the subject of (you may have guessed), human rights. And this brings me back to my point about the whole rotten business being allowed to go on and on and on. Tharappel’s travelling companion (and PhD supervisor) was Tim Anderson, whose resume includes a lengthy stint as lecturer in Political Economy, activist, convicted terrorist involved in the 1978 Hilton Hotel bombing (and later acquitted), and most recently, vigorous defender of Bashar al-Assad.

Assad’s man in Sydney can always be counted on to excuse his hero’s war crimes, deny the use of chemical weapons, and agitate against Western intervention via the organisation Hands Off Syria. Anderson has even been invited to share his views on the ABC (editor: is that really a surprise?). During this interview, Anderson insisted that the so called Butcher of Damascus was really a “mild-mannered eye doctor” with a deep love for the Syrian people, the same people he has gassed, bombed, and immiserated. In a pathetic display of his loyalty, Anderson has made multiple trips to Syria and even genuflected before the tyrant himself.

With an academic supervisor like this, Tharappel’s political views are somewhat more understandable, but no less repugnant. In the dust-up surrounding the article’s publication in Honi Soit, it also came to light that Tharappel likes to accesorise his outfits with the rallying cries of the Houthi terrorist group, usually translated as “Death to Israel” and “Curse on the Jews”. To the surprise of exactly no one, Anderson came quickly to the defence of his protege. His own social media posts and published imprecations against Israel and Zionists are fanatical in their hatred. I dare say even Jeremy Corbyn might protest with a “Steady on there, old boy. That’s a bit much.”

These flowers of our tertiary system are also involved with the Centre for Counter-Hegemonic Studies, Anderson as founder, Tharappel in his usual role. This outfit, a book-club gathering for academic crackpots, hosts conferences at Sydney University and regularly publishes encomia for the dictators in Damascus, Pyongyang, Havana, and Caracas.

All this may seem like another couple of minor pimples on the face of our university system. But then again, maybe not, as it comes at an interesting and perhaps decisive moment for Australian higher education, as well as the culture itself.

For months, the Ramsay Centre for Western Civilisation has been looking for a home at one of our nation’s universities, with the commendable and necessary goal of establishing a course on the Great Books. This would provide students with a truly liberal education and serve as an alternative to the postmodern and anti-Western twaddle that presently masquerades as the best of intellectual thought. As Salvatore Babones puts it in the current Quadrant, the goal is to teach young minds how to think, not what to think, and to do so with the benefits and guidance of the world’s greatest minds.

To its discredit, the Australian National University turned down Ramsay’s offer, and quite a few doctors and professors at Sydney University hope to convince their employer to do the same. More than 200 academics (Anderson included) have signed a much publicised open letter, declaring their vehement opposition to any and all collaboration with the Ramsay Centre. Honi Soit, unsurprisingly, is against it, too.

As any reader of this magazine and its website can see, the successful establishment of the Ramsay Centre has never been more important, both for the souls of students and the health of our culture.

I worry, though. This latest episode merely reminds me of a truth so ugly and evident it is hard to dismiss: Sydney University is happy to be a home for communist fanboys and contemptible fools, but when you’re stopping by campus, don’t dare utter a word in defence of the West and its achievements. That would be deemed grossly offensive, I guess.

For shame, Sydney University, for shame.

Timothy Cootes completed a Master of International Relations at Macquarie University in 2013. He is now teaching in South Korea