Allah is an Englishman

On May 31, 2015, I did a Sunday gig at Hyde Park’s Speaker’s Corner, which since 1872 has been an icon of free speech and British tolerance for dissent. I spoke with gusto, as pictured below, on the global warming scam but it was a rainy Sunday and my audience ranged from zero to five. My wife alerted me that none of the five, all fellow-tourists, were fluent in English.

How times have changed. 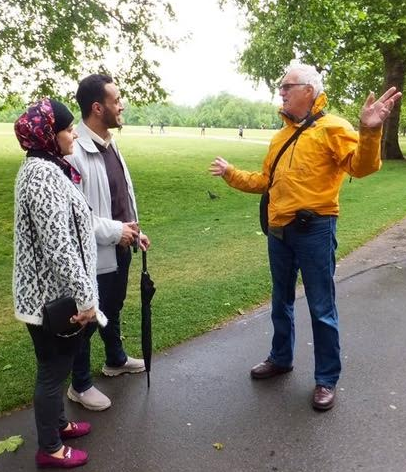 Last week Her Majesty’s Government thwarted an attempt by Generation Identity’s Austrian leader Martin Sellner, 29, to speak at Speaker’s Corner on “threats to free speech in the modern world.” He had been scheduled to speak at a UKIP youth-member forum but Leftists as usual threatened violence and the forum was cancelled, re-scheduled, and cancelled again for the same reason. He then forewarned authorities that he would give his speech instead at Speaker’s Corner.

Therese May’s “conservative” government responded by detaining him on arrival on March 9 at Luton Airport, claiming he was a racist who would provoke violence among spectators in Hyde Park (i.e. by Leftists). As persona non grata he was deported two days later. Sellner said, “I think it’s embarrassing the government is so afraid of me speaking. You can hold the speaker but you can’t hold the ideas.”

His lady friend Brittany Pettibone, 25, a Kansas-raised gonzo YouTuber and author, was with him and got the same treatment. Her main work this year has been filming a documentary on the murderous attacks on white farmers in South Africa. Sellner, with Pettibone accompanying, was a leader of the “Defend Europe” campaign last August, ineffectually targeting boats run by NGOs which sought to “rescue” illegal immigrants off the Libyan coast and bring them to Italy.

Pettibone was deemed by UK authorities a threat to civilisation because she planned to interview Tommy Robinson, another right-wing blogger whose past included anti-Islamic polemics and stints leading the English Defence League (EDL), along with gaol terms for a variety of “political” and ordinary offences. A complex character, he is by no means the Satan he is officially designated. See the Pettibone interview below.

Pettibone tweeted the official letter explaining her deportation. It is vulgar, Orwellian and weirdly illiterate. Any sane person would dub it a hoax. It maintained that this intelligent, outspoken young woman threatened “the fundamental interests of society”, no less, and would “insight” local tensions.

You have asked for leave to enter the United Kingdom as a visitor for 5 day (sic) but as you stated in your interview, I have reason to believe that you are seeking admission to the United Kingdom to interview Tommy Robinson – a far right leader whose materials and speeches incite racial hatred.

You stated at the interview that you will be filming your boyfriend Martin Sellner speech (sic) at speakers (sic) corner (sic) in London Hyde Park (sic).  Your boyfriend admitted in the interview to being a co-founder of the Austrian branch of  ‘Generation Identity’ which is viewed in the UK as a right wing organization.

Furthermore, Your (sic) boyfriend  have (sic) in his possession the Leaflets (sic) with scenarios regarding (sic) possible violence in his speech.

On the same weekend the UK’s Border Force swooped on a third potential wrecker of civilisation, Canadian Lauren Southern, all of 22 years of age. Like Pettibone, she happens to be drop-dead gorgeous, and a scourge of Left feminism. She’s a sponsor of right-of-centre views on the internet (half a million followers), author and creator of amusing stunts at the expense of the politically correct and the Religion of Peace.[i]  In one I really liked (below) she tested Ontario’s  sex-identity regime by firstly persuading a GP that she identified as male (30 minutes) and then using that doctor’s letter to get a driver’s licence as a male from a state public service (another 30 minutes). She fronted in make-up, high heels etc and just said she’d felt like a male for years and now liked hitting on women. The clerk immediately began addressing her as “Sir”.

She was about to enter the UK via bus but was hauled off at Coquelles, at the French end of the Chunnel, and interrogated for six hours under Section 7 of the Terrorism Act (2000), which deprives her and anyone else of normal rights such as to remain silent and have access to a lawyer during the first hour’s interrogation. The Act was brought in to thwart imminent terrorist atrocities. Ms Southern is about as likely as Bambi to stab or blow up British citizens.

Interviewed on-air by Tommy Robinson (below), she told of being asked by Kent-based police, “Are you a Christian extremist?” And “How do you feel about someone driving a car or truck into a group of Muslims?”

Southern: “I literally started laughing. ‘What? Sorry I’m laughing, obviously I think that is horrific, in general a pretty bad thing to run a car into a bunch of people. I think you have your priorities messed up.’”

Police: “How do you feel about right-wing terrorism anyway?”

Southern to Robinson: “It was insanity.”

Robinson: “Do you think they would ask a Muslim detainee, ‘How do you feel about people running cars over non-Muslims?’ It’s scandalous, it would never happen.”

To keep her spirits up, she did successfully identify herself to the police as “Pakistani”.

Eventually they agreed to phone her father to let him know she was detained. Although awoken at 4.30am (US time), he had the wit to record the conversation. The official said Southern was “just answering a few questions” under the Terrorism Act.

Official: “Just so you know (laughs), it sounds worse than it is. Not that we suspect her of being a terrorist or anything like that. We have the power to stop anyone who meets certain criteria.” [at 7.30 minutes]

From his own lips, an admission that their use of the Terrorist Act was an abuse of State power…

The authorities deemed Southern a racist because, if you believe the main media (a bad mistake), she had handed out tracts saying “Allah is gay” in Muslim-heavy Luton, Bedfordshire. Put aside the authorities’ mistaken belief, also held by our ABC, that to be anti-Islam is to be ‘racist’. Here’s the facts:

Vice magazine, which has a British operation and edition,  ran a story  by Jules Suzdaltsev in 2015 asserting that Jesus was gay. He wrote,

“Worshipping at the feet of a ripped, hung man, seems at least a little homoerotic. But it’s Jesus himself who lights up my gaydar like a Christmas tree. He’s a skinny young otter-like guy, flocked by a mess of dudes, telling everyone to love and care about each other, who later gets the shit beaten out of him by a bunch of closed-minded conservatives who are terrified of change… As it turns out, this is not a unique theory. Dr. Reverend Bob Shore-Goss, an openly gay senior pastor, has written several books on the subject, including Queering Christ and Jesus ACTED UP: A Gay and Lesbian Manifesto…”

Southern, an avowed Christian, wondered how Muslims would respond to their own fountainhead being branded gay. So with anti-Islamic crusader Tommy Robinson, she unveiled posters and handed out fliers in Muslim-heavy Luton with a faked “LGBTQI for Islam” message, namely, ‘Allah is Gay, Allah is Trans, Allah is Lesbian, Allah is Intersex, Allah is Feminist, Allah is Queer, Allah is All of Us.’ Who could object to that, in this LGBTI-friendly and gay marriage era?[ii]

Big  surprise! A great many bearded gents did object. The police shut her show down for the sake of public safety, but laid no charges. The authorities bided their time and struck by deporting her this month.

Southern complained, “I would hope that [the UK] would be pro-freedom of speech, and support people’s right to question Islam, to even have cheeky posters, make jokes and social experiments, to give a speech at Speakers Corner.”

The UK government’s vigilance in intercepting two young Christian women at the border contrasts with their official bumbling which recently allowed more than 400 British fighters for ISIS to come home  from Iraq and Syria and disappear into the community, for good or more probably, for ill.[iii] At the same time the authorities have cranked up desperate attempts to equate the menaces from Islamic and from far-right terrorists. Any terrorism is vile, but the relative UK body counts speak for themselves. If the letter to Southern is a guide, even to be “right wing” affronts the “conservative” May government.

The BBC in weasel words reported that the three deportations were “a move that some say is part of a crackdown on the far right”.

The media piled on by soliciting Leftist groups such as HOPE not Hate and the US-based Southern Poverty Law Centre (SPLC) to slander the deported trio. The SPLC, for example, claimed Southern’s YouTube interviewees “tiptoe at the precipice of outright white nationalism” and branded her the “alt-right’s Canadian dog whistle.”

HOPE not Hate CEO Nick Lowles let a cat out of the bag by saying the government is now going after “softer targets on the hard right”. “These are people who have huge reach on social media, they are peddlers of online hate, and the online reach of right-wing hate preachers can have disastrous consequences.”

Bollocks? You be the judge.

[i] Barbarians: How Baby Boomers, Immigrants, and Islam Screwed My Generation. Written when 20.

[ii] Note that the mainstream media, by abbreviating her words to “Allah is gay”, distort her  message to discredit her.

[iii] Research by The Soufan Centre estimated that only Turkey (900), Tunisia (800) and Saudi Arabia (760) had larger numbers of returned foreign fighters.  About 300 fighters have returned to Germany and 271 to France.