At the ABC, Hypocrisy on Stilts

On January 23 the ABC 7.30’s star Leigh Sales conducted  a reverential interview of American sleaze artist Michael Wolff. He is author of Fire and Fury (see Geoffrey Luck’s Quadrant Online review), a salacious insider account of alleged goings-on at the White House under Donald Trump. Not once did Sales ask any question pertaining to Wolff’s admitted disregard for truth and authorial integrity. Her only interest was in allowing Wolff to vent his anti-Trump bile on her taxpayer-funded platform, for which she is paid some $400,000 a year.

On Friday, January 26, three days after the Sales interview, Wolff was publicly accusing Trump and his UN ambassador, Nikki Haley, of having an extramarital affair. Wolff, who didn’t name Haley outright, dropped such blatant hints about the identity of Trump’s alleged lover that her identity could not be in doubt. The “facts” that he cited in the book in an allusion to Trump and Haley’s meetings were wrong. In a word, Wolff is disgusting. So is the ABC and 7.30, for giving this Wolff creature prime-time and unchallenged exposure. Then again, given the ABC’s relentless anti-Trump narrative, what more could viewers expect?

The  sisterhood’s commentariat at the ABC has shown  no interest in Wolff sliming the UN ambassador as a woman who supposedly owes her job to Trump’s casting couch. My search of the ABC today turned up no reference to Wolff’s Trump/Haley sexual fantasy. It is another example of the ABC’s most effective propaganda device of all: news that doesn’t fit the narrative is ignored.

Here’s how the Wolff smear evolved. He was interviewed by HBO’s Bill Maher, a leftist with a gleeful leftist audience :

Maher: I want you to tell me something that people have not noticed in this book. Is there something (there), ‘Why don’t they ask me something about this that I put in there, that they are not talking about?’

Wolff: There is.  But I can’t tell you what it is. (Audience laughter)

Maher: F—k you Mike, teasing us like that (laughter)

Wolff: There is something in the book I was absolutely sure of but it was so incendiary that I just didn’t have the ultimate proof that…

Maher: Considering what he (Trump) has done, was it a woman thing?

Maher: Was it about a woman?

Wolff: Yes it is, it is someone he is f—king now. (Laughter). You just have to read between the lines.

Maher: What lines? Tell us the lines. You say it is in the book.

Wolff: It is at the end of the book. You just have to…you will know it,  now that I have told you, when you hit that paragraph you are going to say, ‘Bingo!’[i]

The paragraph referred to is necessarily this one:

“By October, however, many on the president’s staff took particular notice of one of the few remaining Trump opportunists: Nikki Haley, the UN ambassador.  Haley – ‘as ambitious as Lucifer’ in the characterization of one member of the senior staff – had concluded that Trump’s tenure  would last, at best , a single term, and that she, with requisite submission, could be his heir apparent. Haley had courted and befriended Ivanka (Trump’s daughter), and Ivanka had brought her into the family circle, where she had become a particular focus of Trump’s attention, and he of hers.”

Wolff adds that Trump “had been spending a notable amount of private time with Haley (below) on Air Force One and was seen to be grooming her for a political future.” 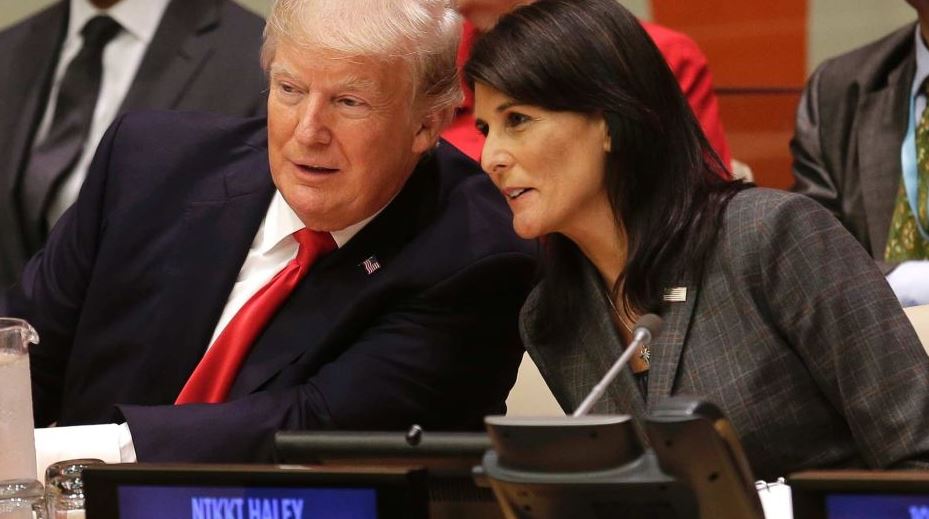 Here’s some background on Nimrata (Nikki) Haley. She’s the daughter of an Indian Sikh woman  Raj Randhawa who was one of India’s first female judges, but who was unable to sit on a court because of anti-female hostility.  The family migrated first to Canada and then to  the small town of Bamberg in South Carolina, where they stood out as the only Indians. Nikki’s father, Ajit Singh Randhawa, became a professor  at the  historically black Voorhees College.

Haley’s career began as an accountant and entrepreneur in the family’s clothing business and after activism in community, pro-lifer  and women-in-business lobby groups,  in 2004 she was elected for the first of her three terms in the state lower house. In 2010 she defeated a Democrat to become the state’s  first Indian-American governor, and was re-elected in 2014. Despite her sometimes critical comments about Trump[ii], he nominated her UN Ambassador in January 2017 and she has played an outstanding and outspoken role in advancing American interests. Since her marriage to US Army officer Michael Haley in 1996, she identifies both as Sikh and Christian. They have two children.

I’ve transcribed Haley’s response to Wolff on Politico, which gives a nice character-contrast to Wolff and his fan, Leigh Sales. It also makes a nice contrast to PM Julia Gillard’s 2012 fake anti-misogyny speech against Tony Abbott. That much-lauded speech was, inconveniently, in defence of her Speaker Peter Slipper who had likened women’s genitals to “mussels in a bottle”.

Haley: It (the sex smear) is absolutely not true. It is highly offensive and it is disgusting. It amazes me what people will do and the lies they say for money and power and in politics it is rampant.

Here is a man saying I’ve been spending a lot of time on Air Force One. I have literally been on Air Force One  once and there were several people in the room when I was there.[iii]

He is saying I am talking a lot with the President  in the Oval Office about my political future. I have never talked once to the President about my future and I am never alone with him … If you speak your mind and are strong about it and say what you believe, a small percentage of people resent that and throw rumors and lies to diminish you, not just in politics but in corporate life  and elsewhere …With a small percentage of men, if you just do your job well and are outspoken about it, they resent it and they think the only option is to bring you down.

Interviewer Eliana Johnson:  How do you, as probably the most powerful and outspoken woman in the President’s cabinet, handle those types of rumors? It is a real challenge that strong women face in the workplace.

Haley: I hope other women and men stand up and say this is wrong. I hope the media doesn’t just let this blow up because it is not something that has just happened. As a cabinet member I see it, as a legislator I saw it, as governor I saw it, I see it now. When women work they prioritise, they focus and they believe if you are going to do something, do it right. Others see this as too ambitious or stepping out of line.

The truth is we need to continue to do our job. People see lies for what they are.  Do I like this (smearing)? No.  Is it right? No. Is it going to slow me down? Not at all. It only makes me fight and work harder.

I do it for the sake of other women that are behind me because they should never have to put their heads down and cower out of fear that someone is going to do something to them.

If you are doing the right thing you always win at the end of the day.

We all love America.  You help those in need who are struggling, you lift them up so they can do something for themselves … I am proud of the US and of my parents for how they raised me. It has all come together to make me who I am. I go back to what my Mom said, ‘The best way to appreciate your blessings is to give back’, so I am always giving back. It is what I do, what I enjoy and it has been the honor of a lifetime.”

In terms of identity politics, favored style of the Left, here is a minority-group woman being trashed by Wolff, an old white male,  with evidence-free claims that she has risen to a high executive position by use of extra-marital sex, rather than talent.

Clementine Ford, Anne Summers and the cabals of ABC feminists led by Leigh Sales will surely be calling out this misogyny any moment now.

[i] The US print accounts omit the crude language.

[ii] For example, she told CBS that the women who have accused Trump of sexual misconduct deserve to be heard. She said Trump had not complained.

[iii] She was referring to a flight from Washington to Long Island in late July.

15 thoughts on “At the ABC, Hypocrisy on Stilts”

Appearing On The ABC, Bias

Their ABC, for now