The Coalition for Marriage and other retrograde, old-fashioned organisations opposed to the legalisation of homosexual “marriage” in Australia have pointed out that such legalisation will inevitably lead to demands that gender identity be defined not in terms of biological reality but to whatever “gender” (and there are  apparently dozens of these) the individual chooses for himself, herself, zimself or zerself.

However,  I offer the proposition that the transgender demands are really quite conservative  — at least so far.  Activists are only lobbying for a choice of gender; let’s say a change from “John”  to “Joan”.  But what if they started lobbying for a real change of identity,  from John to Joan of Arc?  Millions of Hindus believe in reincarnation, so if one is going to change one’s gender from “John” to “Joan”, why not make such a change really impressive by identifying  as a genuinely significant Joan?

Merely changing from “John” to “Joan” will soon become mundane, even be greeted with a yawn — but for a biological male to identify as Joan of Arc, the Maid of Orleans, now that would be headline-grabbing, a real career change, and what an opportunity to go on Q&A, and be feted at The Conversation, where the latest academic fashions are always to the fore.

Of course there are a few obstacles in the way of such transitions.  The American College of Pediatricians, one of several US groups representing practitioners, obstinately defines gender change as child abuse. Their most recent statement on the matter can be read here.

Despite this recalcitrance on the part of medical experts, new opportunities are opening up all the time. Our High 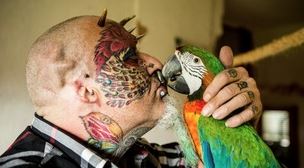 Court recently identified Deputy Prime Minister Barnaby Joyce,  as a Kiwi.  I think the court meant he is a New Zealander, not the bird reportedly close to extinction, but one can no longer be certain.

In the UK a man who identifies as a parrot had his ears amputated and face and eyeballs tattooed to look like his beloved pet parrots. Bristol resident Ted Richards  (right) has appeared on TV to insist his avian transition is “normal”,  that he did not much like his ears anyway, and that he does not think his eccentric look is “weird”. He is obsessed with his pets — Ellie, Teaka, Timneh, Jake and Bubi — and has his face 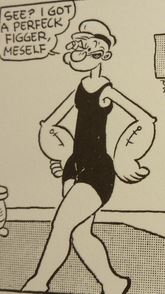 tattooed with colourful feathers. He has given his severed ears to a friend who “will appreciate them” and is now planning to find a surgeon prepared to turn his nose into a beak.

“It’s what I’ve always wanted to do – I love it. I’ve had letters from people saying that I’ve changed their life,” he raved to a TV audience, prompting the compere to ask the studio audience, “He’s alright, isn’t he”?   To great applause, the host added: “It is your life and it is your body and you’re trying to be who you want to be and who the hell should be able to say any different. You are what you are.” Even Popeye is breaking gender barriers these days.

Ted Richards has changed his name to Ted Parrotman and said “There’s no doubt that when they made me they broke the mould. But seriously, I love the fact that I’m unique and I have always wanted to be different.” The practice of removing someone’s ears was historically done as an act of physical punishment in England called “cropping”.

Marc Pacifico, a consultant plastic surgeon and member of the British Association of Aesthetic Plastic Surgeons,  was rather the spoilsport in criticising such surgery. “I am absolutely horrified to learn that someone has voluntarily put themselves forward for this to be done and possibly more so that he found somebody to actually carry it out,” Pacifico said. “The sad truth of life. though. is that if you want something badly enough you will eventually find someone willing to do it.

“I would like to think whoever did this is not medically qualified because that would call into judgement their ethics and morals.  As an accredited plastic surgeon you have to have a great sense of moral and ethical responsibility.  I can only assume the ethical code and moral compass of whoever did this does not.”

Some wag commented that with this transmodification from man to parrot, surgery had reached a peak.  Or maybe he said “beak”.  I find it all a trifle confusing.  But Ted  Parrotman can take consolation in the implied approval of Prime Minister Theresa May,  who has vowed to streamline the process of altering and presenting one thing as something it is not. Her government will seek to “streamline and de-medicalise” the process of changing gender to reflect that “being trans is not an illness”, she promised while addressing the Pink News Awards in London. For good measure she added,  “We are pressing ahead with inclusive relationships and sex education in English schools, making sure that LGBT issues are taught well”. As good as her word, the Cabinet Office has instructed British civil servants not to use “gendered” pronouns like “he” and “she”.

Not to be outdone, in October, 2017, Denmark recommended that the United Nations Human Rights Committee not use the term “pregnant woman” because it excludes “transgender people” –  presumably pregnant “men”. Surely, we live in an age of wonders!

Sadly, the acceptance of human parrots,  100kg “female” footballers and largish “ladies” in women’s bathrooms is far from complete. Ex-army officer Bernard Gaynor, for example, complains that transgenders stuffed full of hormones might not make the most efficient  soldiers or soldierettes.

Even more recalcitrant is Orthodox primate Metropolitan Hilarion Alfeyev, chairman of the Moscow Patriarchate’s department for external church relations, who warned that Greece’s new transgender law is a “crime before God and the people. Making gender a matter of personal choice is not only anti-Christian but anti-human.  We are speaking about young 15-year-old boys and girls who may later completely change their minds.”

He  was obviously species-selective in  overlooking kiwi birds and human parrots in his diatribe. It almost makes me  nostalgic for the good old days of the Soviet Union, when church leaders, those not in gulags or Siberia,  knew their place and did not dare comment on state affairs, which the recognition of notional identity has become.

Babette Francis is the National & Overseas Co-ordinator of Endeavour Forum Inc., an NGO having special consultative status with the Economic & Social Council of the UN

Desecration on the Derwent: Vandalism Billed as Art