Homophobia is the biggest non-problem since climate change, but it does offer endless opportunities for corporates to gain market share in an age of gullibility.  Among many companies trying to be extra hip, Aussie unicorn Atlassian is merely the latest to (literally) daub its corporate headquarters in rainbow hues.  Like the NRL and others, It is taking a commercial punt on the zeitgeist.  It may or may not be proven to be a sound punt.

“Startup giant Atlassian will light up its Sydney headquarters in a rainbow-coloured show of support for marriage equality, as part of the tech unicorn’s ongoing efforts to promote a culture of inclusiveness and diversity in its team of more than 2,000 global employees. 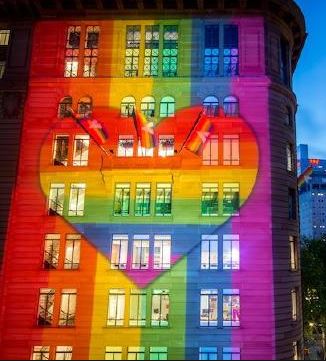 From Thursday, October 12, the software startup’s Sydney HQ (right) will wear rainbow colours to project the outfit’s support for “marriage equality” into the streets of Sydney. Atlassian will continue this colourful display between the hours of  7pm and midnight for the next week as a show of solidarity with its LGBTQI+ staff and one side of the same-sex marriage debate.
Wow!

Are Atlassian’s workers really freaked out by the same-sex marriage debate?  Like ABC employees, I guess.  Counselling will be provided!

Now it is different.  This is especially the case for the right-on generation of startup companies that seek to merge entrepreneurship with endlessly hip social inclusion.  It’s the modern corporate combo, the Silicon Valley mindset.

In our age of values-purchasing, big data and mass marketing through online communications, companies seek to gain an extra edge by tapping into feel-good memes.  We now expected to buy from those with whom we identify.  It makes us feel good, feel right.

But homophobia — largely a figment of the Left’s fertile imagination — is a new area of potential values-selling to a factoid-inundated generation which will believe and accept pretty much anything.  At least that is what companies such as Atlassian believe their customers want and will embrace.  And they are probably right. Atlassian apparently sees rampaging homophobia as real and that it affects its employees’ mental health. Really?

This is insane.  Or is it?  Perhaps it has been market tested to within an inch of its life, and found to hit the mark with Atlassian’s customers:  We are selling our brand by positioning ourselves on the right side of history.  Buy our stuff if you oppose (non existent) homophobia. Atlassian is proud to stand by its “outlassians”.  Yes that is the word its marketing department has manufactured, call it Atlassianspeak.

“We are a company that’s really aligned with our values, and one of our values is play as a team,” Atlassian’s global head of diversity and inclusion Aubrey Blanche tells StartupSmart. “Part of our team is our LGBTI colleagues — the Outlassians — and we know that at this time they are struggling a lot,” she insists.

“It’s very difficult to have one of the most significant relationships of your life put up for public debate, and this is a chance for us to stand up and speak out for our Outlassians and make them feel like the belong when they walk through our doors.”

They are struggling a lot, really?  Is it a really such a genuinely scary time for gay Atlassian employees to be roaming our nation’s homophobic streets, secure only when they cross the rainbow threshold of their safe space workplace? I beg to differ.  The heteronormatives are the ones who are struggling.  Struggling to get venues to allow their meetings. Struggling to hold peaceful events. Struggling even to have the boycott and harassment of free speech by gay-marriage advocates acknowledged.

Think I’ve come down with a case of hetero paranoia? Well just look at the ABC’s ongoing ledger of gay-marriage unpleasantness, which the national broadcaster updates daily. Predictably, the overwhelming majority of cited cases involve No voters being beastly to Yes advocates. What you will not find is any reference to Federal Hotels cancelling without warning or explanation a No campaign meeting at Wrest Point casino. The ABC, which Michelle Guthrie insists does not need a “fair and balanced” provision in its charter, projects Left-approved virtue actively and by omission.

Only a fool would believe these rubbish tales of gay terror and coast-to-coast homophobia, yet that is what the rainbow urgers insist is endemic. And so, to the accompanying flutter of press release and handouts and look-at-us self-congratulation, buildings are rainbowed and then presented as weapons against bullying. Posters printed in the ink of virtue go up all over, approved opinions are endorsed and all others rejected with contempt. Workshops are held and employees are expected to attend and, if they disagree, to remain silent.

A Warm Afternoon with Cardinal Pell