On Monday, August 21, Andrew Taylor of the Sydney Morning Herald approached the University of Sydney’s public relations department on an information-fishing expedition. He said he’d been thinking about the removal of Confederate monuments in the US and wondered if there were any Australian targets that might deserve the same treatment. He asked the PR people to pass on to the university’s experts in Australian history the following questions:

Taylor’s leading questions were clearly more those of an agent provocateur than that of the “Independent, Always” reporter the Herald proclaims on its masthead. He was obviously hoping to provide fodder for the emergence of a local activist campaign to emulate that in Charlottesville, Virginia, where, amidst scenes of street violence that left one woman dead, officials removed the statue of Confederate General Robert E. Lee, and in Baltimore, Maryland, where, in one night earlier this month, city authorities removed four Confederate statues commemorating the American Civil War. 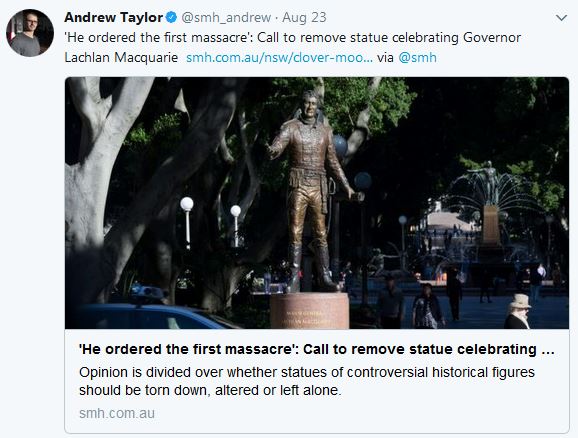 Andrew Taylor promotes his own article detailing “concerns” about the “affront” of statues in Hyde Park.

The Australian campaign for the eradication of politically incorrect statues and similar historic symbolism began on the ABC last Friday with a column from Stan Grant, these days the ABC’s indigenous affairs editor.

Grant compared the local acceptance of statues of Captain James Cook with what was going on in the United States. “Statues are coming down, old flags of division are being put away and the country is tearing itself apart. Fascists, neo-Nazis and klansmen who wrap themselves in the flag of the Confederacy are reigniting the old grievances of the civil war.” Grant criticised Donald Trump’s attempt to blame both sides and quoted a New York Times editorial saying, “There’s a moral awakening taking place across America, but President Trump is still hiding under his blanket.”

But, Grant says, while America cannot avoid the legacy of racism, we in Australia find it all too easy to avoid. “We vanish into the Great Australian Silence.” Anthropologist Bill Stanner coined that phrase in the 1960s to describe what he said was “a cult of forgetting practiced on a national scale” but Grant says: “We have chosen to ignore our heritage. So much history here remains untold.”

Grant went to Sydney’s Hyde Park last week and looked on the statue of Captain James Cook. “It has pride of place, a monument to the man who in 1770 claimed this continent for the British crown,” Grant writes. On the base of the statue is inscribed in bold letters the words “Discovered this Territory, 1770”. Grant asked his readers to think about those words, then advised how to interpret them:

“My ancestors were here when Cook dropped anchor. We know now that the first peoples of this continent had been here for at least 65,000 years, for us the beginning of human time. Yet this statue speaks to emptiness, it speaks to our invisibility; it says that nothing truly mattered, nothing truly counted until a white sailor first walked on these shores.”

Grant’s disgust at the inscription on Cook’s statue is completely misplaced. When it says Cook was the one who “discovered this territory” it is perfectly accurate, if we take the word “territory” to mean the eastern coast of the Australian continent. Cook was, in fact, the first person in human history to traverse the whole of this coastline and to view its 2000 miles of shores and hinterland. No Aboriginal person had ever done that before – they never had the maritime technology to do so.

On the other hand, if the Hyde Park inscription had said Cook discovered Botany Bay, or Port Jackson or Morton Bay, or any other small local area on the coastline inhabited by the Aboriginal people Cook himself met, it would have been inaccurate and probably worth correcting. The local Aborigines clearly knew their own areas better than any foreign seaman. But in their own lifetimes they remained confined to these areas and, although their predecessors had gradually spread themselves across the continent over thousands of years, none of them gained the view of it that Cook had in his four-month journey from Port Hicks to Cape York in 1770. He was the genuine discoverer of the whole entity.

In his moral objection to Cook’s great accomplishment, Grant also creates a straw man to knock down. He claims that no-one present when the status was erected in 1879 questioned that this was “the man who founded the nation.” Well, the statue doesn’t say Cook was the founder of the nation and I doubt any reputable historian would say so either. At most he might be regarded as one of the founders of the first British colony in New South Wales, but this decision was taken by other Englishmen a decade after his discoveries. In any case, the nation was not actually founded until Federation in 1901, a political event that can hardly be attributed to Cook.

Grant’s column throws up other straw men that also display his inability to talk sensibly about Australian history. He writes:

“When I drive through the Blue Mountains west of Sydney to return to the country of my ancestors, the Wiradjuri, I cross the Coxs River named after William Cox the pioneer and road builder — the same William Cox called for the massacre of Aboriginal people.”

Grant quotes Fairfax journalist and author Bruce Elder, whose book Blood on the Wattle claims Cox once addressed a crowd at Bathurst in 1824 saying: “The best thing that could be done is to shoot all the blacks and manure the ground with their carcasses.”

Unfortunately for Grant, Elder’s book is notoriously unreliable. It was not William Cox who allegedly made this statement, but the Mudgee pastoralist George Cox, and it is most unlikely that he even said this. The sole source for the quoted statement was not a report from anyone who actually attended the meeting in question (held in Sydney, not Bathurst). It comes from a letter to the London Missionary Society written by Reverend Lancelot Threlkeld four months after the meeting.

Threlkeld, a former circus performer turned missionary, had long been generating funds for his mission at Lake Macquarie by reporting to England fancifully gruesome stories about the treatment of Aborigines in the colony, such as “the ripping open of bellies of the Blacks alive; the roasting them in that state in triangularly made log fires, made for the very purpose.” No one should take his claims seriously.

In fact, rather than being guilty of slavery, Macquarie joined Arthur Philip in guaranteeing that institution never had any role in the Australian colonies. Macquarie was strongly influenced by both of his religiously devout wives, who supported the abolitionist movement for the end of the slave trade.

His first wife, Jane, was the daughter of the chief justice of Antigua in the West Indies and she owned a small number of slaves there. Jane died of consumption in 1796 and in her will she set her slaves free. Her husband followed her example and emancipated two slaves he had purchased in 1794 when employed in the Indian Army, enrolling them in a parish school at Bombay to learn to read and write.

Macquarie returned to England in 1807, the year of the abolitionists’ victory, and caught the enthusiasm for their cause. That year he married his second wife, Elizabeth, and came under the influence of her religious outlook, especially her belief that all human creatures were equal in the eyes of God. These views changed the course of Australian colonial history. Determined to avoid any comparison between convict transportation and slavery, Macquarie radically reformed the punitive regime for convicts, turning it into a program for their regeneration — now widely recognised as one of the few successful rehabilitation programs for prisoners in human history.

The English leader of the emancipist cause, William Wilberforce, had a strong influence on Macquarie. He named a new settlement on the Hawkesbury after his mentor and launched a Wilberforce-inspired evangelical religious revival to reform community morals, especially sexual licence, crime, drunkenness and family neglect. He used the evangelical movement to promote church-going, marriage, education and social mobility among the colony’s lower orders.

Macquarie translated Wilberforce’s agenda into policy towards the Aborigines. He established a Native Institution* for Aboriginal children five years before an industrial school for white children; he settled Aboriginal adults on a farm at George’s Head and gave them seed and tools; he built huts for others at Elizabeth Bay and gave them a boat, fishing tackle, salt and casks; in 1814 he inaugurated an annual gathering and feast for all the Aborigines of the Sydney region.

Left-wing historians today record with some satisfaction that all Macquarie’s Aboriginal policies eventually failed. This is only partly true.

While the Native Institution could not attract enough children to sustain its existence, the farm at George’s Head on Sydney Harbour remained in Aboriginal hands and provided several generations with a living for almost a century. Even though the others were not successful, they still demonstrated Macquarie’s intention towards the Aborigines. He regarded them as his equals and thought that with only a little assistance they could make the transition from hunting and gathering to agricultural society.

The great blemish on Macquarie’s Aboriginal policy in today’s eyes was his military response after Aborigines killed nine settlers in the Upper Nepean River district, between Mulgoa and Appin, in 1816.

Macquarie sent three military detachments to the region to track down and bring in some of the known killers. One military party, commanded by Captain James Wallis, found some of the wanted men of the Gundungurra people on the Cataract River. In the ensuing pursuit, the troops shot and killed 14 of the fleeing Aborigines, including two of the killers.

Now known as the Appin Massacre, the incident was the last major hostility in the Sydney region. In November that year, Macquarie declared a general amnesty for any other Aborigines wanted for assaults on settlers. In December he hosted a “general friendly meeting of the natives” at Parramatta, which celebrated the end of revenge killings by both sides and the “coming in” of the last hostile tribe to settler society.

None of this Australian history deserves any comparison to relations between indigenous people and white colonists in North America, let alone to the grievances of the descendants of African-American slaves.

Grant’s attempt to drag the legacy of the American Civil War into Australian history does not fit in any way, and his attempt to promote a political campaign against the public statues of some of the great men of Australian history, especially James Cook and Lachlan Macquarie, is sheer journalistic opportunism.

Grant and others in the media are encouraging racial conflict for no good reason, except for the dramatic news reports they would like to see generated. They should be ashamed of themselves for their wanton provocation.

*editor’s note: The SMH, in a 2015 report, predictably cast the Native Institution as a progenitor of the Stolen Generations. The report begins thus:

“This week, Rosemary Norman-Hill visited a site of a school where 200 years ago her great-great-great grandmother Kitty was forced to abandon her Aboriginal way of life and integrate into white society.”

Keith Windschuttle is the editor of Quadrant. This essay was first published in The Australian.