A Modest Proposal to Fix the ABC

Jim Spigelman and fellow members of the ABC Board must have been very pleased to see Michelle Guthrie arrive from Google. In these PC times her appointment ticked almost all the boxes. Once you discount her unfortunate history of working – Shock! Horror! — for private enterprise, and previously — more shock, more horror — for Rupert Murdoch. On the positive side she is a multicultural Australian female, married to a chef, with a track record of delivering management in cutting-edge areas of the media. Since Ms Guthrie has been in the job, however, what signs are there that she understands the issues confronting the ABC, let alone the Australian populace?

Well, here’s a quick list of five things she could and should do in 2017, just to demonstrate that the ABC is committed to its mission statement.  (If we’re still allowed to say “mission, are we?)

Nothing better spells a national broadcaster’s dedication to serving its audience than situating itself where real people live. In Sydney, real people – and by that I don’t mean man-bunned hipsters — haven’t lived at Ultimo since the old powerhouse became a museum. When the BBC moved some of its operations from boring-old-London up to Media City in Salford, Manchester in 2011, it proved their commitment to the real Britain “north of Watford”.

Now it should be the ABC’s turn to show it is mindful of the real people in Australia, those “west of Penrith” or, to be more precise, beyond the borders of Newtown and Fitzroy. Where better than Goulburn, Australia’s premier inland city and just a hop, skip and jump from Canberra?

Goulburn boasts much of the meaty fare on which a broadcaster feeds: proximity to a maximum security jail so Four Corners activists can accuse guards of mistreating prisoners. There is also an abattoir, which would save on airfares when animal-rights activists ginger-up reporters to screen their home movies of alleged animal abuse. There is also Goulburn’s greyhound track and an Anglican cathedral, the latter opening the way for Songs of Praise to be made once again in-house. If that particular basilica also happens to include amongst its divines young vicars who perform gay marriages and deliver sermons about the mortal sin of climate-change denial, so much the better.

ABC TV has progressively lost its rights to broadcast most of the major (men’s) sports and the Sport department is looking much the worse for wear. Let’s be frank, covering the Under 19 Grong-Grong Matong Women’s Lacrosse Semi-Finals just hasn’t brought in the mass of viewers the ABC is seeking. So why not rejuvenate coverage of sport while bringing in a whole new generation of viewers and listeners? Fusing ABC Sport with Children’s TV would be a masterstroke.

How many Aussie children wouldn’t love to stay up late watching not just two but eleven Bananas in Pyjamas take on Pakistan? As long as Peppa Pig was not selected to bring out the oranges, no problems. How good would it be to encourage the next generation of Olympic heroes to practice the triathlon at home (complete with a swimming leg in the bath) while watching Playschool?

Perhaps Ms Guthrie is already working on to this merger, with so many fresh-faced ABC Sports reporters and reporterettes seemingly just out of kindergarten.

3. Subcontract all foreign news to China

Those familiar with Senate Estimates grillings of ABC executives know the recipe: a light touch of ginger followed by 15 minutes on high, the worst heat dampened by a Greens garnish. They will also be aware that a major entry in the ABC’s budget is the cost of all those foreign correspondents, some of whom send ill-advised tweets. While some of this burden has been subcontracted in recent years — here let us recall how the national broadcaster outsourced coverage of the most recent Paris terror strikes to Al Jazeera — the ABC’s bureaux and roving reporters still chew through those dollars.

Why not take a great leap forward and let a thousand flowers bloom? China already runs a comprehensive international service, CCTV. China – including Hong Kong and Taiwan (as it claims it does) — has leap-frogged New Zealand to be the major source of tourists to Australia.  Why not make those those 1.3 million annual visitirs feel right at home?

Putting CCTV in charge of the ABC’s foreign news would be what is known as “synergy”.  And, after all, what is Australia future other the land-just-beyond-the-South-China-Sea?

4. Replace ABC Breakfast with Mornings with Malcolm and Lucy

The ABC’s News Breakfast TV show is broadcast out of a Melbourne studio but there is a major distraction. Those who keep an eye on who the ABC chooses to hire will always see hostess Virginia Trioli and be reminded of the remarkable coincidence that saw, out of all the applicants, her hubby, Russell Skelton, a former Age journalist and Abbott-hater,  land a nice little gig heading up the Fact Check unit. Some of his tweets are reproduced below for the benefit of those with poor memories. 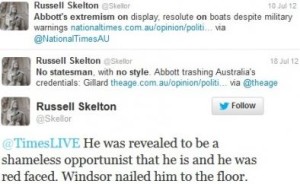 No, what Australia really wants to see first thing is our PM and his charming wife sipping Ceylons on their Point Piper terrace (or wet and live in a kayak below, updating us on Sydney Harbour traffic).

Just picture it: Lucy could interview Julie Bishop to ask (among other things) if she thinks Tony Abbott fits his budgie smugglers as well as does her hunky hubby (below). She might also explain why, when various ABC comedians lampooned Abbott for his lifesaver’s official beach attire, Malcolm identical taste in skimpies prompted no jokes whatsoever.

After that, Malcolm can orate — champion schoolboy

debater that he is — while correcting or subtly undermining his Cabinet and an entire range of his own party’s policies. After that, brace for a born leader’s homily on the relevance of Thucydides to the Prickly Pear Abatement Act. Expect Niki Savva to give him an A+ for not being Tony Abbott and employing her very own husband, who must be a modest an retiring because she never remembers to announce that connection in her columns.

Ratings would shoot through the Turnbulls’ terracotta’d roof so fast their solar panels would go into orbit. As to how Malcolm bagged Australia’s top job, viewers would be reminded every time he picked up a knife to butter his artisan toast.

Let’s face it, many ABC TV viewers only tune in for the blood, guts and corsetry of those beautifully-filmed UK period dramas — something like Poldark, but updated and set locally.

So what about “Coal Dark”, which would tell the story of what happened to Victoria’s industries and economy when the Labor government of Premier Dan Andrews shut down 20% of his state’s capacity to generate electricity? To maintain ABC tradition Andrews could appear by candle’s light in a merry widow and stockings, thus introducing a sub-plot focusing on the gender fluidity he is so keen to promote in schools.

True, the villain would be obvious from the first minute of the first episode, but that’s nothing unusual. On the ABC you always know exactly what to expect.

Easy Lessons for the Simple Left

Quietly Anxious on the Baltic