“Charlie Hebdo is a punch in the face!”

That’s the magazine’s own claim for its unique savaging of current events. And in response to the regular shouts of “Shocking!’,“Lack of respect!, “Racist!” and “Freedom of speech doesn’t make everything acceptable!” Charlie simply replies: “Very nearly everything in life is absurd or preposterous; life being so awfully short it would be a pity to spend it whining in dismay instead of laughing it up a storm.”

Now Charlie has done it again, with a cartoon on the Italian earthquake (below). Bleeding and burnt, a man and his wife are depicted as dished-up penne; the rest of the village is collapsed in layers like lasagna. At a time when Australia is mired in a precious debate about Section 18C and the right to offend, here’s a brilliantly cruel example of how to do it — and to produce, on cue, the flatulent outrage of the morally virtuous. Where have all the “Je suis Charlies” gone, long time passing, long time ago?

But Charlie is not only funny drawings.  Its weekly essays prick the bubble of hypocrisy, jerking the reins to curb society’s bolting political correctness. When France fell apart arguing whether the burkini ban was a restraint of free expression or a defence of secular sanctity, Charlie apportioned blame equally.

“The Left should fight against the burkini the way it fought against the reactionary opponents of gay marriage in France. Because those conservative Catholics who hit the streets in protest at such progressive reform dabble in the same restrictive, narrow view of morality and ‘family values’ demonstrated by woman covered from head to toe on a beach.”

But, “The Right is not going to be much help either with its legal manoeuvres which achieve nothing. For the Islamic moral order, like that of many religions, doesn’t much care about earthly laws and temporal rules. Their tactic is the tactic of the fair accompli. No debate, no vote, no protest. We have no choice. It’s up to us to slip on the veil, grab a burqa or burkini up.” 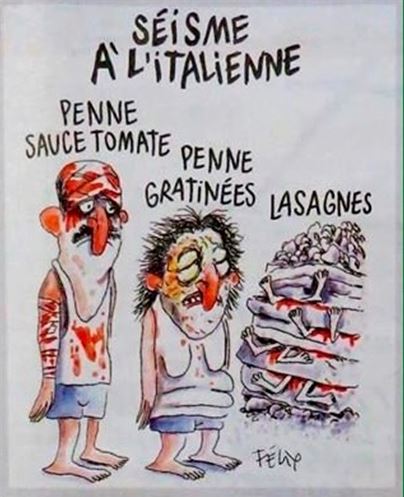 The author, Robert McLiam Wilson, concluded with a philosophical observation about the magazine’s craft that is a warning to us all:

“When French justice decides that there can be no legal offense of blasphemy and thus one has the legal right to caricature religion, no one seems to take advantage of that law. Apart from Charlie Hebdo cartoonists, who dared to draw the Prophet? Cartoonists are scared of exercising a right which the law has confirmed and underlined because they are scared they might be killed. Just like the unenforced burqa ban, the law has been completely overtaken by this new Islamist-inspired moral reality. It seem that the law of fear is stronger than fear of the law.”

Daze of Whine and Poses