In the comedy Children of the Revolution (1996) Judy Davis’s character bonks Joe Stalin in the 1950s and their  love child, Joe, gains a career in the Australian police union. In the real world Australia came quite close to adopting Stalin’s daughter, Svetlana, as a political refugee in 1967. Svetlana, then 41, was an unwelcome arrival by taxi at the US Embassy in New Delhi, demanding asylum. The US was trying to mend fences with the USSR, and Washington wanted her thrown back to the unforgiving Soviets.

Too late, they were told: she was already on Qantas to Rome.  Actually, the flight had been delayed two hours and Svetlana was still in the departure lounge. The sequel is laconically described in John Blaxland’s  “The Protest Years: The Official History of ASIO” (Vol 2, 1963-75), published last October.

Occasionally ASIO was approached by the Americans to consider resettling defectors.  Generally, the Australian Government looked favourably on requests to resettle such people but there were instances when it objected.

In 1967, for example, the Americans approached [ASIO director-general Charles] Spry to see if Australia would be prepared to grant asylum to Svetlana Iosifovna Stalin, the daughter of Soviet dictator Joseph Stalin.  Spry advised the Minister for External Affairs, Sir Paul Hasluck, and the Secretary of the Prime Minister’s Department, John Bunting, that a number of factors had to be taken into consideration before agreeing to the request, although  ‘the difficulties  of looking after her would not be insuperable’. Australia had plenty of experience looking after the Petrovs.

Hasluck acknowledged that the principal argument in favour  of granting the request was ‘to please the Americans’, but believed that acceding to the request would have significant repercussions on relations with the Soviet Union and South-East Asian countries. Hasluck saw more disadvantages than advantages, and Prime Minister Holt agreed. In the end, soon afterwards, she settled in the United States.

Svetlana defected on March 6, 1967. The flurry of memos began when Svetlana was holed up in secrecy and stateless in Rome. New Zealand  turned down a concurrent US request to take her. South Africa offered residence but she refused. Moving on to Switzerland, she had a US-organised disguise  as “Fraulein  Carlen”, an Irish tourist. The cover was so weak that an ex-Soviet circus performer, now an Australian citizen, mailed her a marriage proposal. 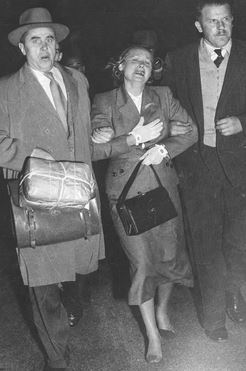 Svetlana made it to New York on a six-month tourist visa. She’d been hiding  her manuscript   Twenty Letters to a Friend and a US publisher offered $US1.5 million for the rights. This windfall meant she needed no official subsidies and could enter and live in the US as a  private citizen.

Australian connections keep popping up. When Vladimir Petrov defected in 1954, two burly Soviet agents at Mascot frogmarched Mrs Petrov onto a plane to Moscow. In the famous tarmac photo, one Soviet minder was unidentified; the other was burly, moustachioed Vasily Stanko (on the right).

The day before  Svetlana made it to New York, the same Vasily Stanko also arrived, as “a chauffeur” with the Soviet Mission to the UN.  Svetlana’s entourage hastily hired six minders from the Fidelity Detective Bureau. tanko’s failure to, presumably, effect her return to Moscow had repercussions. Brezhnev fired KGB chairman Vladimir Semichastny three weeks later, and replaced him with Yuri Andropov, the next Soviet leader.

Svetlana and her brother, Vasya, were the offspring of Stalin’s second marriage, to Nadya Alliluyeva, who shot herself  in 1932 after a dinner-party row when Stalin flirtatiously threw bread rolls at her romantic rival.  Svetlana was only six.

Stalin’s son by his  first marriage, Yakov, surrendered or was captured by the Germans within days of being sent to the Smolensk front in 1941. Stalin in 1943 refused to exchange him for Stalingrad’s Field Marshal Paulus. Yakov suicided or was shot by guards at Sachsenhausen.

Stalin had an often affectionate relationship with his “little sparrow”. All the same, he wiped out most of her mother’s kin in purges.  Not many girls grow up with the mass murderer of their own family. Svetlana married four times. Her love life began badly with her teen crush getting ten years in the gulag.

Marriage #1 to Jewish fellow student Grigori Morozov lasted three years. Stalin pushed her into marriage #2  to Yuri Zhdanov, son of Stalin’s offsider, Andrei Zhdanov. The latter’s alcohol-fuelled demise became Stalin’s pretext for the post-war “Doctor’s Plot” pogrom. Yuri himself got into trouble with Stalin by criticising the crackpot genetics of Trofim Lysenko, but grovelled his way to safety. In 1962 Svetlana briefly married Johnik Svanidze, raised in an orphanage for children of executed parents.

From her teens she was disgusted with Soviet brutality and conformity, and in 1966, shortly before her defection, openly supported the dissident writer (and one-night lover) Andrei  Sinyavsky, who got seven years hard labor.

Her defection arose because of her de facto marriage in Moscow to Brajesh Singh , the son of the rajah of Kalakankah in Uttar Pradesh. They met when both were hospitalised in Moscow, but permission to marry was refused. When Singh died in 1967, the regime  allowed Svetlana to go to India to scatter his ashes in the Ganges. She seriously overstayed her visa, and then tricked her minders into giving her back her passport, skipping to the US Embassy. She abandoned a son, then 22, and daughter, 17 in Russia.

In the US, Svetlana denounced her late father as “a moral and spiritual monster” and likened the KGB to the Gestapo. 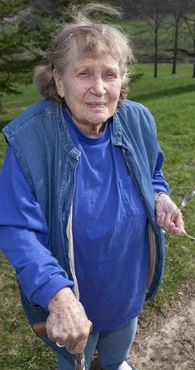 In 1970 she made her fourth   marriage to architect Frank Lloyd Wright’s  associate (and ex-son-in-law) Wesley Peters. The three-week courtship was orchestrated by Lloyd Wright’s widow, Olgivanna, who had a nose for Svetlana’s royalties fortune.  The pair had a daughter, Olga, before divorcing.

In 1984, when  Olga was 13, Svetlana  (now known as Lana Peters)  decided to rejoin her adult offspring in Russia. In Moscow she denounced the tyrannical West. She regained Soviet citizenship but, amazingly, was allowed to return to the US in 1986, and died a recluse in Wisconsin in 2011, not long after the photo at right was taken.

She had a distinguished career as writer and translator, despite her unfortunate paternity. In a rare late interview, she said of Stalin, “He broke my life.  Wherever I go — here, or Switzerland, or India, or wherever, Australia, some island — I will always be a political prisoner of my father’s name.”

author’s note: Rosemary Sullivan’s excellent 700-page biography Stalin’s Daughter (Fourth Estate, 2015) is the source for many of these details. Svetlana’s reference to Australia is in the book’s first paragraph.

One thought on “Stalin’s Lost Sparrow”

The Method in Their Madness