Senator Marise Payne of NSW is our new Defence Minister. Although she joined the Liberal Party in 1982, she remains an unknown quantity for most of us — apart, that is, from the fact, much observed and celebrated over recent days, that she is a woman. So let’s look beyond the advantages of XX chromosomes in charting the course of the nation’s defence and get to know the minister in her own words.

The point to begin is Payne’s maiden speech, delivered on September 2, 1997. There is a lot in the speech about how wonderful women are, but nothing worth repeating, plus some thoughts on the need to communicate with young Australians.  The Senator then says she looks to

“a future Australia that is proud of its diverse and varied community. From Australia’s original indigenous inhabitants to the first European settlers to migrants from the many hundreds (sic) of countries now represented here, we live in peace in one of the richest communities in the world.”

The Senator’s love of diversity doesn’t appear to extend to love of diverse opinions, referring to Pauline Hanson’s One Nation party as “simply offensive, unacceptable and morally repugnant”.  Now we get into a meaty bit which is worth quoting in full:

I watched, read and listened with interest to discussions surrounding the release of the Human Rights and Equal Opportunity Commission report into The Stolen Generation. I could not but put myself in the position of those whose stories filled the report. As I was growing up in my safe and stable family, in my home and at my school, children my age in Aboriginal Australia were still being taken from their homes, their parents and their siblings. I can never feel their pain, but I can try to understand the devastation I would feel in their situation, and I can apologise for those misguided acts. As a nation we must answer the challenge of reconciliation now for the memory of those for whom it is already too late and for the sake of future generations.

So, Senator Payne swallowed the whole concocted Stolen Generations myth, hook, line and sinker. Then it gets better.  In this little rant she is 18 years ahead of the current mania on homosexual marriage and so on:

A future Australia should be a nation free from discrimination against any individual. Discrimination against people based on their gender, their race, their sexuality, their religion, their HIV status or their education does not belong in our democracy. Before I hear the clamouring cries of right-wing media commentators about political correctness: this is not a statement about women’s rights, gay rights or minority rights; rather, it is about human rights.

Right on, sister!  The reference to “right-wing media commentators” is a further suggestion that there are limits to the Senator’s love of diversity.  Two paragraphs on we finally get to an interest in a defence matter, but on the way there she first mentions people with AIDS and the tragic death of a princess:

Too often I have seen at first-hand the impact of discrimination against people based on their HIV status. As a committee member of the AIDS Council of New South Wales, I have tried to redress this in some small way, and it is in this context that I recognise the tragic death of Diana, Princess of Wales. With the rest of the world, I was stunned by news of her untimely passing—a young woman, only three years older than me. Her contribution to the campaigns fighting, firstly, discrimination against people with AIDS and, secondly, for a ban on the use of anti-personnel landmines are indicative of her commitment to humanity.

AIDS status, Princess Diana and landmines all in one paragraph!  Until now, it seems that banning landmines has been the Senator’s only interest in defence matters.  The next two paragraphs concern her interest in younger Australians. Then the Senator wishes for a republic and gets something wrong.  See if you can pick it:

During my time in this Parliament, with the will of the majority of Australians in favour of change, I know I will see an Australian—one of us, who lives amongst us and is chosen by Australians—take up office as our head of state.

She got that wrong.  The will of the people in the referendum two years later,  in 1999, was to keep Princess Diana’s former mother-in-law as head of state. 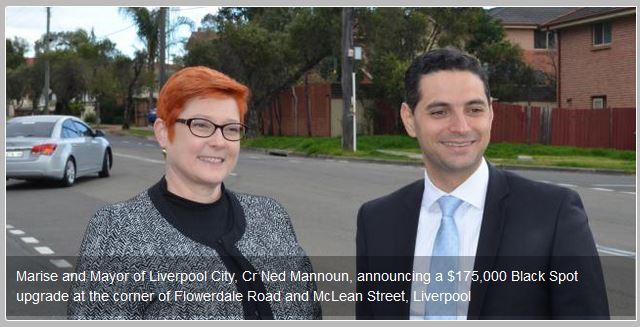 Some might think that Senator Payne’s weltanschauung isn’t going to fit well with Defence, but there are parts of the portfolio where she might fit right in.  There is an office, for example, that is worried about global warming, ocean acidification and the like — the Combat Climate Change initiative.  They must be doing it pretty well because the climate hasn’t changed since Senator Payne became a senator.  Then it gets better.  There is an office in our Defence Department that is even loopier, the Australian Civil-Military Centre.  From that site:

Australian Civil-Military Centre is particularly proud to be part of White Ribbon, not only because it reflects Defence’s core values and expectations, but it also accords with some of Australian Civil-Military Centre’s key projects and publications, including: Side by Side, Women, Peace and Security; Gendered Crises, Gendered Responses; and Conflict-related Sexual and Gender-based Violence.

It looks to me like Senator Payne’s interest in the nuts and bolts of military matters will resemble John Curtin’s hands-on interest during World War II: none at all.  John Curtin never visited a military base in Australia.  He got dragged kicking and screaming to a RAF base in the UK that had some seconded RAAF personnel though, once. More recently, the oleaginous Stephen Smith was also known for not darkening the doorsteps of defence establishments.

Abbott as Prime Minister talked the talk on the defence acquisition budget but sought to inflict a pay cut, in real terms, on defence personel. Even allowing for the deteriorating world situation, is Senator Payne likely to indulge her instincts and inflict Labor-like cuts on the acquisition budget? We’ll have to wait and see, but one bet seems certain: the unit cranking out publications asserting that the most pressing military mission is the need to combat sexism is not likely to find itself being squeezed.

David Archibald’s next book is Australia’s Defence 2016 and Beyond (Connor Court).

Cut Your Throat with a Stab in the Back