The GOP’s Outside Chancers

A poll, taken immediately after the second Republican candidates’ debate, shows Carly Fiorina now in a tie with Donald Trump for first place among Republican primary voters. This may be the first sign that Donald Trump’s huge lead amongst an angry and alienated base is starting to evaporate.

Trump’s appeal was always visceral and emotional. His supporters could vent, knowing full well that they will not be required to pull a lever in a polling booth until 2016. Trump’s brashness, rudeness and narcissism could be deployed against a squishy GOP establishment to the accompaniment of wild cheers from the conservative base, whilst his inconsistencies or, indeed, any consideration as to whether he was fit to be president could be safely deferred by his current supporters. Jonah Goldberg and other writers from National Review are right to denounce Trump as a populist fraud. However, they may be missing the political dynamic which will be the rise of the viable outsider. 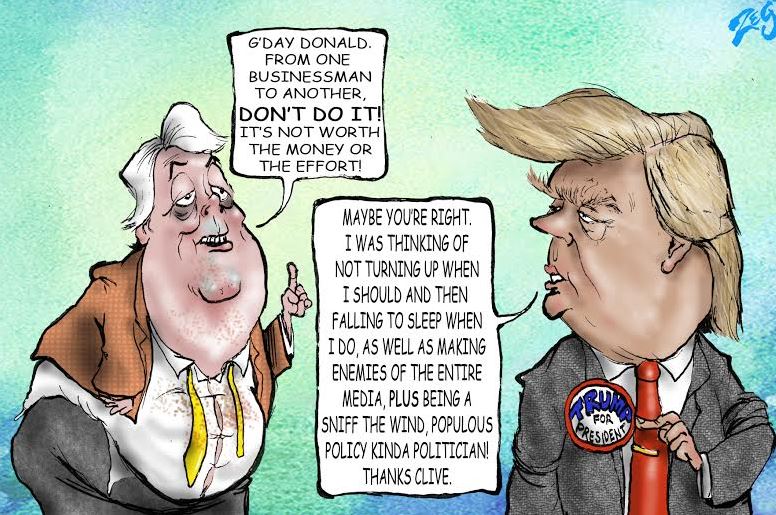 I believe Carly Fiorina is in the process of blowing a puncture in Trump’s oversized balloon — but she, like Trump, is a political outsider and not without baggage. She may or may not win the nomination; the politics is far too fluid to make any prediction, and her checkered record atop Hewlett-Packard, where she was forced out after several years of turmoil, losses and a ham-fisted merger with Compaq, will provide foes with plenty of ammunition.  At the first debate, sponsored by Fox News, Fiorina did not even make the first ten, and, thus, qualify for inclusion in the main debate. However, whether it be Trump, Fiorina or Ben Carson, now polling in third spot, it seems that the only safe prediction is that the outsiders will dominate the primaries.

What a difference a few weeks can make. My earlier prediction that Cruz, Rubio and Scott Walker would be the main players has been partially overtaken by the collapse in support for  Walker, the highly successful governor of Wisconsin. Indeed, earlier commentary that successful state governors would have an advantage over senators, has not been borne out. Rick Perry, the former highly successful Governor of Texas, has now suspended his campaign, having failed to score much more than 2% in national polls. For all his administrative competence and potential, Perry was never able to overcome his lapse of memory back in the 2012 primaries, which made him the object of ridicule.

Likewise, Bobby Jindal, the highly intelligent and competent Governor of Louisiana, has made no impact on the national stage and will likely drop out. Scott Walker will have to reverse his decline soon or face the inevitable decision. Meanwhile, Senator Marco Rubio has soared to 15% in that post-debate poll. To call him an “establishment” candidate, as some conservatives have done, is silly; in many ways he would be the ideal candidate to unite all sections of the Republican Party. Unfortunately, his earlier support for the so-called “Gang of Eight” Immigration Bill put him at odds with much of the conservative base, even though he has tried to walk back his support for the package, which included amnesty for illegals in the United States. This may put a ceiling on the support he will gain in the coming primaries.

Senator Ted Cruz retains a solid support base, but has yet to break out. He is hoping to inherit Trump’s supporters, and perhaps his poll numbers will improve as the current front-runner’s numbers decline. He is brilliant and, on the issues, is totally in accord with the conservative base. However, in terms of appealing to a wider electorate, he seems less personable than Rubio. At any rate, support for senators who are outsiders seems more solid than the support for governors.

The central dynamic so far is that the so-called establishment has completely lost control. At the start, it was assumed Jeb Bush’s machine would hoover up the big money and overwhelm any rivals. It seems that the GOP establishment assumed that 2016 would be a replay of 2012: sheer weight of money would enable Bush to pick up support from rivals who dropped out and ride to coronation at the Republican convention. The problem with this stratagem is that, unlike Mitt Romney in 2012, Bush is not even the base’s reluctant second choice. His delusion that he could ignore the base and yet secure the nomination has enabled Donald Trump to destroy his candidacy.

Whatever Trump’s political fate, his lasting legacy may well be the destruction of the GOP’s Beltway establishment.