The Myth of a Muslim Reformation

Contemporary commentary on the crisis of Islam is bedevilled by several important misconceptions about religious history and the nature of Islam.

It is commonly claimed — for example, by the New York Times‘ Thomas Friedman —  that the crisis of the Muslim world will only be resolved when Islam undergoes a Reformation similar to that experienced by the Christian West. Melanie Phillips, author of Londonistan, claimed on Radio National’s Between the Lines  “there is a problem in the religion [Islam], it has not been reformed to enable it to coexist with Western notions of human rights.” According to Phillips, the medieval Christian Church carried out beheadings and burnt people alive before reforming itself at the beginning of the Modern Age: “It came to an accommodation in the Reformation with secular authority. It divided church and state. Islam has not had that kind of Reformation”. Phillip’s argument was cited by Janet Albrechtsen in The Australian beneath the headline “Battlefield of ideas is where fanatics will fall”.

All this is quite misleading, for various reasons. To begin with, as Nick Danforth argued recently in Foreign Policy (“Islam Will Not Have Its Own ‘Reformation’”, the Reformation delivered no such accommodation. Henry VIII made himself head of the Church on England (a position the Queen continues to hold), while various theocratic Protestant regimes and communities were established in Europe and North America, brutally enforcing their religious orthodoxy through capital punishment, including burnings at the stake. In fact, Church and State battled for supremacy for centuries throughout the West. As Danforth remarks:

For most of Europe’s past, the only thing church leaders and their monarchical counterparts agreed on was that Church and State should be united. They just disagreed over who should be holding the reins. In fact, if anything kept Church and State separate, it was the power struggle between the two camps.

Even centuries after the Reformation, the Catholic Church and many Protestant denominations were battling fiercely against the secularizing principles of the Enlightenment. Pope Pius IX issued the famous Syllabus of Errors in 1864 condemning the basic principles of modernity, liberalism, freedom of conscience, and even notions of social progress, and it was only with Vatican II in the 1960s that the Church retreated from its resolute anti-modernism (producing its own reaction). Meanwhile, Protestantism spawned fundamentalism in the early twentieth century, demanding a return to the ‘purity’ of the ‘fundamentals’ of the faith associated with the early Christian Church and incidentally establishing a model for subsequent forms of radical Islamism.

It should also be remembered that the Reformation did not bring inter-faith peace or an end to religious wars. Indeed, it ushered in a long era of religious warfare without parallel in previous European history. Inaugurating these conflicts was the Peasants’ War of 1524-5, a popular revolt in the German lands. Although the masses were inspired by the Protestant teachings of Martin Luther, he denounced them, and some 250,000 peasants and their supporters were slaughtered as the existing regimes re-asserted control. This was followed by the Sack of Rome (1527) when Lutheran troops (who viewed the Pope as the Antichrist) joined other forces under the nominal command of the Holy Roman Emperor and pillaged the Papal States, leaving the Holy City de-populated and in ruins, effectively terminating the Renaissance.

In 1534-5, the Münster Rebellion broke out in Germany and an Anabaptist theocracy led by John of Leiden seized power. Proclaiming the ‘New Jerusalem’, the regime instituted a form of communism and burned all books, except the Bible. John was an apocalypticist who believed the people of Münster were God’s Elect whom he would lead in a campaign to purify the world in preparation for Christ’s Second Coming and the start of the Millennium. Cannibalism had broken out in the city by the time the rebellion was suppressed and John and the other leaders were tortured to death and their bodies hung in metal cages from the tower of the city church.

In France, the Wars of Religion (1562–98) between Catholics and the Protestant Huguenots involved open warfare and vast massacres that killed between 2 and 4 million people and led to the emigration of hundreds of thousands of French Protestants. Wars between Protestant and Catholic nations were endemic and culminated in the Thirty Years War (1618-1648). This decimated central Europe and especially the German lands, where some 8 million people, or about 40 per cent of the population, died in battle or through disease, and the demographic, social, and political development of the region was retarded for centuries.

From the Muslim perspective the notion that there can or should be a separation of religious and state authority is absolute anathema. As Islamists make very clear, such an idea transgresses the foundational Islamic principle of tawhid (unity).  Indeed, Western commentators need to recognize that Islam is constituted in a different fashion to Western Christendom and has no dualistic tradition of church and state. Indeed, Islam is an integral civilization with no place for separate religious and socio-political realms, especially where these are conceived to operate as independent, autonomous, or countervailing forces, as is promoted by the Western notions of political pluralism and multiculturalism. In Muslim Society (1981), Ernest Gellner described Islamic integralism:

Islam is the blueprint of a social order. It holds that a set of rules exists, eternal, divinely ordained, and independent of the will of men, which defines the proper ordering of society. … Thus there is in principle no call or justification for an internal separation of society into two parts.

The comprehensive and integral nature of Islam flows from and is reinforced by the absolute Unity of God, which is held as sacred above all else under Islam and forms the foundation for all its beliefs, as the prominent Iranian sociologist Ali Shariati insisted in Voices of Resurgent Islam (1983):

Tawhid is the foundation of the individual and social life of a Muslim. All human activities and relationships, whether political, economic, literary, or artistic, ought to be firmly founded on tawhid. It provides one, single direction, and it guarantees a unified spirit for its adherents.

The ideological founder of Islamism, Sayyid Qutb, made it quite clear in Milestones (1964) that this principle must be enforced throughout every aspect of personal and social life:

The total human endeavour must become one movement, bent on the realization of the purpose of human existence, worship [of God]. … Islam is a unity that is indivisible. Anyone who divides it into two sections is outside this unity, in other words, he is outside this religion.

A leading authority on Islam, Giles Kepel, spells out what this means in Jihad: The Trail of Political Islam (2002):

Islam [is] a complete and total system, and there [is] no need to go looking for European values as the basis for social order. Everything was made clear in the Koran, whose moral principles [are] universal. … The solution to the political problems facing Muslims [lies] in the setting up of an Islamic state that would implement the sacred texts of Islam.

Above all, this Islamist model of modernity entails “a complete and total blend of society, state, culture, and religion” — a blend with which everything begins and ends. The social order envisaged by Islamists contains no internal contradictions.

Consequently, from the Islamist perspective the Western division of society into realms of politics, culture, religion, and the social exemplifies the infidelity and decadence of the West, or what Qutb called jahiliyyah. This is the state of ignorance, wilful disbelief and human arrogance that has declared war on God and is all-pervasive under modernity. As he says in Milestones, Jahiliyyah “takes the form of claiming that the right to create values, to legislate rules of collective behaviour, and to choose any way of life rests with men, without regard to what God has prescribed”. Western societies, which subordinate religion to the democratic process and the rule of secular laws are consumed by jahiliyyah.

Finally, it must be recognized that Islamism already resembles Protestantism in its insistence that believers have a legitimate role as autonomous interpreters of the sacred text – the Bible for Christians and the Koran for Muslims — independent of clerical authority.  This involves ijtihad or ‘independent reasoning’ and is opposed to taqlid, or the uncritical acceptance of the findings of religious scholars and experts in Islamic jurisprudence. The Muslim Brotherhood, al-Qaeda, ISIS, the Salafis and other fundamentalist Islamist sects have been at times major proponents of ijtihad, believing that it makes it possible for Islam to respond to modernity while restoring the doctrinal purity that prevailed under the Prophet and the Golden Age of early Islam. They use it especially as a weapon against existing Muslim regimes, which they portray as apostates from Islam. 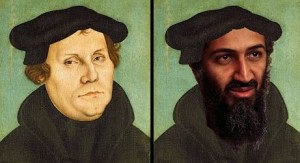 The resemblance with Protestantism doesn’t end there, because ijtihad allows or even encourages sectarianism and ideological deviation. Just as Luther witnessed the fragmentation of his theological revolution into extremist sects, such as the Anabaptists who seized control of Münster, so contemporary Islamism must be on guard against its own fragmentation. Consequently, Islamists who do attain political control, like the Salafis in Saudi Arabia, tend to impose tight controls over the application of ijtihad, along with other limits on individual freedoms, have all been emphasizing the hegemonic rule of Sharia law, of which they appoint themselves the guardians. Mosques, endowments, courts, religious institutes, trade unions, political parties, charities and the media are all tightly regulated or else proscribed.

As these remarks indicate, any call for an Islamic Reformation is deeply problematic. The convulsion that Western Christendom experienced half a millennium ago, may have led to the empowerment of the individual and opened up new religious pathways, but it also unleashed dark and violent forces whose drastic repercussions lasted for centuries. Nobody with any grasp of history would wish to see that repeated, especially in a world where nuclear weapons and other devices of mass destruction are increasingly available, even to rogue regimes entertaining visions of the Apocalypse.