A friend in funds management in Sydney sent me an email last weekend which said in part that special interest groups “will not be receiving government funding for much longer. The outlook for the Australian economy is nothing short of frightening. We have utterly squandered a one-in-a-hundred year economic boom.”

Yes, a lot of people are now running around saying that the sky is falling, but how far could it fall?  Let’s have a look at iron ore.  The chart following shows Australian iron exports and prices from 1969 with a projection to 2020.  The prices are in 2015 constant Australian dollars.  Iron ore volumes are the blue line and prices are the green line: 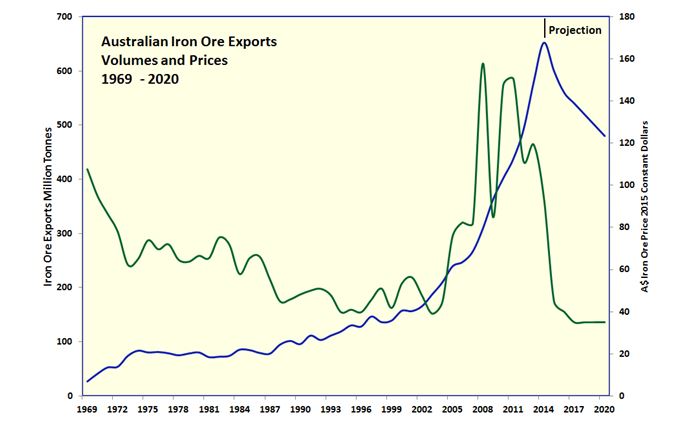 Iron ore exports took off in the 1960s with the Japanese steel boom then hit a brick wall with the first oil price shock of 1973.  There was a 14% volume decline from 1974 to 1981.  The iron ore price entered a gentle long term decline from the early 1970s, losing about 30% of its value and bottoming out in the 1990s, even as export volumes were rising.  There was a price dip in 2003 even as export volumes started to accelerate away at the beginning of the China boom.  The chart shows a volume contraction of 24% from now to 2020.  In the Japanese steel boom of the early 1970s, production capacity peaked at 140 million tonnes per annum, production peaked at 120 million tonnes per annum and then fell to 100 million tonnes per annum.  A contraction of a similar magnitude could be expected in China.

What determines how much money we make out of digging up iron ore though is the price.  Some people think that the price will hang around the current level of US$60 per tonne.  But if we look back twelve years ago, the price was $39 per tonne (in current day dollars) and that was a tight market.  The Chinese steel producers say that their production will not be increasing from the current level.  More supply is coming on from Australia though.  There will be a price response to clear the oversupply.  My chart has the iron ore price bottoming at $35 per tonne which is a few dollars per tonne less than what it was trading for in the 1990s in 2015 dollar terms.

The two big producers, BHP and Rio Tinto, have cash operating costs, that is not including depreciation, of about US$20 per tonne.  Let’s use that figure to make a stab at the notional free cash flow that Australia has generated from iron ore exports from 2000.  The chart following shows the result. 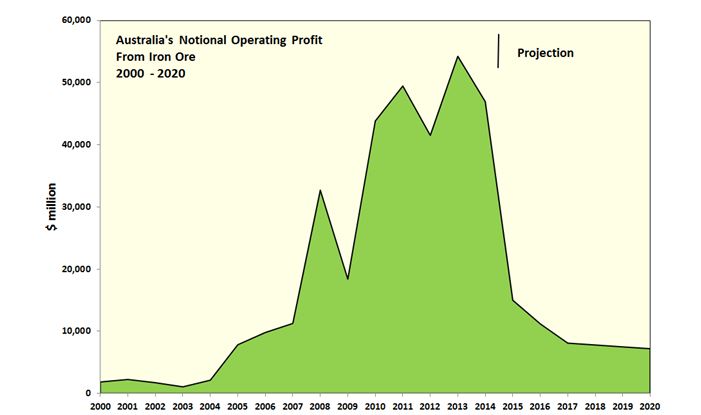 Early last decade, Australia didn’t make much money out of digging up iron ore.  The golden years were the five years of 2010 to 2014 when we were making $40 to $50 billion a year that was used to pay taxes, dividends, boom-era wages and investing in building more iron ore mines.  A couple of years ago, resources construction peaked at 7% of the economy.

We got used to living with an extra $50 billion a year odd from iron ore and now we are going to have to adjust to living without it.  It is a similar story with coal.  The Federal Government has told us to tighten our belts but hasn’t acted as if it meant it.  The West Australian Government ran up $30 billion-odd of debt during the iron ore boom and is having one last splash of vanity projects with billion dollar price tags.  You know how it will all end.