So, Professor Stanley, Who Are the Liars?

For obvious reasons of personal dignity, I declined to “debate” the unpleasant Mike Carlton on the ABC (“debate” implying there was something to debate) regarding my book Australia’s Secret War: How Unionists Sabotaged Our Troops in World War II, which shared the Prime Minister’s History Prize. Carlton, whose own book was an unsuccessful entrant for the prize, has effectively beclowned himself by claiming one of my informants, Mr W. S. Monks, did not exist when there is an hour-long interview with him on YouTube (Following my unfavourable review of his previous book in The Spectator, Mr Carlton sent me a perfumed missive replete with four-letter words).

I will, however, make a brief if Socratic reply to Peter Stanley’s fulminations in that high academic journal, The Drum.

Stanley’s diatribe has two mutually incompatible thrusts: (a) that I rely on “oral history” and  (b) that I rely on secondary sources. To indicate an initial pons asinorum, many of my sources were not “oral” but books, documents and letters. 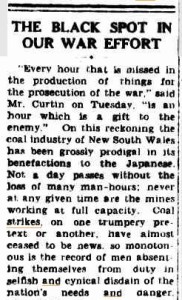 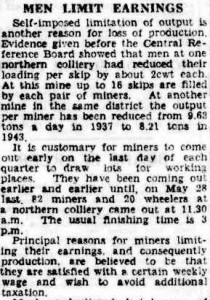 He also claims I do not make use of newspapers. This is a simple untruth. Had he bothered reading the footnotes to my book he would have seen that newspapers, particularly the Sydney Morning Herald are frequently cited. His malicious and venomous description of Quadrant as “the journal that has become increasingly right-wing as its cadre of writers age and sink into a furious, fulminating dotage,” betrays his own ideological position and degree of objectivity. (editor’s note: Stanley’s disdain for Quadrant would not have anything to do with mention made of him in Merv Bendle’s essay “Lest They Forget To Sneer“, would it?)

Since he questions the accuracy of my book, I ask him very simply, and challenge him to answer the question: Who is lying? Is it Vice-Admiral Collins, who described how HMAS Sydney was nearly stranded at Garden Island because dockyard workers refused to handle the mooring lines? Is it Sir Charles Court, who described a strike by seamen aboard a ship carrying troops to the islands, and who described the strikes as a “constant background to everything we did?”

Is it perhaps Sir Bernard Callinan, second-in-command of the heroic Sparrow Force, who described loading at Darwin for Timor: “We stayed on the ship for two days, while the wharf labourers made a travesty of loading.” Or other 2/2 commando officers such as Colin Doig and Archie Campbell, who gave similar accounts? How about Perth City Councillor and Master Mariner and Lt. Cdr. in the Australian Naval Reserve Eon McDonald, or former HMAS Hobart officer W. Wreford? All liars? Or this further account from Peter Plowman’s memoir, Across The Sea to War 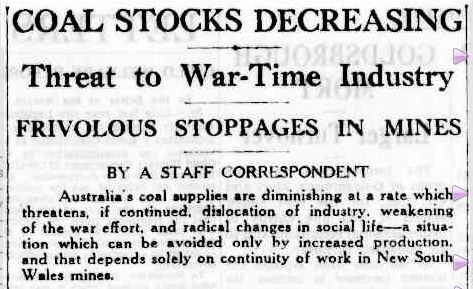 Perhaps the liars are the authors of Radar Yarns (see page 71), who opened cases of radar valves at Green Island to discover they had been stolen, as a result of which aircraft were lost (Radar Yarns calls the aircraft Vultee Vengeances, others have said they were Corsairs. If the latter is true, it does not make the slightest difference to the central point of the story)?

Maybe the liars include Labor Prime Minister Chifley and WA Labor Premier Collier, who said at the time of John Curtin’s death that the strikers had broken his heart? Perhaps Curtin himself was lying when he drafted a War Council Minute on strikers stopping work building life-rafts? Are the liars the wharfies who gloatingly described how the war enabled them to blackmail the ship-owners and government?

But perhaps the liars are the many ordinary soldiers and sailors, many of them probably unionists themselves in civilian life, who came forward with accounts of wharf, coal and other strikes?

Editor’s note: At the Catallaxy blog, commenter Stackja went fossicking in the stacks and came up this summation (below) of wharfside strife in wartime Australia. It is from The Transportation Corps: Operations Overseas by Joseph Bykofsky and Harold Larson, printed in 1957:

Australian longshoremen, who by American standards were considered slow and none too efficient. Masters of WSA vessels often complained of delay at this port. Townsville was a stopover point for north-bound convoys, and in September 1943 as many as thirty-six ships at one time were lying at anchor awaiting call forward to New Guinea. The peak activity came in that year.

The subtropical port of Cairns, still closer to New Guinea, became a temporary base in September 1943 when the heavy demands of New Guinea exceeded the capacity of Townsville. Situated at the mouth of the Barron River, Cairns could receive a maximum of seven ocean-going vessels at one time. The harbor had to be dredged. Port equipment was poor, and the civilian longshoremen there, as elsewhere, were slow in discharging cargo.
U.S. Army activity at Cairns rapidly dwindled as traffic shifted to Port Moresby and Milne Bay.
The use of local civilian labor was attended by many difficulties, which were most pronounced in Australia. The Australian longshoremen were organized in ”a strong, militant, articulate union,” the Waterfront Workers Federation. Its bargaining position was excellent, both because of political influence and because of the acute wartime labor shortage. As in the United Kingdom and the United States, the Army did no direct hiring but dealt instead with stevedoring firms, which secured dock workers from the unions.

The Transportation Corps frequently found the Australian dockers trying, none too efficient, and costly. The water-front workers sometimes refused to handle refrigerated or other special cargo, or they suspended operations because of rain. On occasion they were described as insolent, thievish, and resentful of the presence of the U.S. Army. They resorted to frequent strikes and walkouts, thus requiring the use of American and Australian troops to insure the movement of urgent cargo. According to Colonel Plant, the Australian longshoremen had an average discharge rate of five tons per hatch per hour, whereas untrained American soldiers under the same conditions could turn out four to five times as much cargo.

Much of the Australian output at the ports entailed costly overtime, premium, and penalty rates. Overtime could not be avoided since an Australian law required that every vessel arriving there be worked around the clock. Premium and penalty cargoes were determined by contract. One effect of the high wages resulting from this system was that the workers often took vacations after three or four weeks of steady employment. Considerable time was lost each day because of the morning and afternoon “smoke-o,” the lunch hour, and, of course, the “tea-o.” The actual working time of a shift was about five hours, although the men were paid for eight. American transportation officers were well aware of this unsatisfactory situation, but they could do little except complain in their reports. Since the local government was under union dominance, the U.S. Army in Australia had to preserve a delicate balance between its own desires and the demands of labor, employing troops at the ports only under the direst circumstances.

In Australia and the United Kingdom, for example, well-organized longshoremen did not readily accept the necessity for dropping leisurely peacetime practices and working at the pace the Army deemed necessary. Inevitably, too, unfavorable comparisons were made by American troops between their pay and that received by civilians working beside them.