There was an idea in the mid-19th century that trade promoted peace.  That is that once countries realised that they did better trading with one another than fighting, peace and goodwill amongst nations would prevail.  This was the theme of two peace conferences in the UK in 1853.  That was also the year that Commodore Matthew Perry visited Japan and forced it to upon up to trade and modernisation.  A scant 20 years later, the Japanese Government discussed attacking Korea.  They attacked China first, in 1895, took over Korea in 1905, then annexed it in 1910.  Japan just kept on attacking as the decades passed and left bitter memories throughout the region.  And some of the victims love keeping the memory alive.  Today 30% of Chinese prime time television is devoted to movies about the Japanese invasion of the 1930s.

One problem with trade and rapid economic development is that it tends to make people over-confident.  Bethman Hollweg, chancellor of Germany at the outbreak of the First World War, confessed later that Germany had over-valued her strength.  ‘Our people’, he said, ‘had developed so amazingly in the last twenty years that wide circles succumbed to the temptation of over-estimating our enormous forces relative to the rest of the world.’  That sounds exactly like China one hundred years later.  And there is the problem of when economic growth falters.  In 1982, Argentina attacked the Falklands to provide some patriotic legitimacy to the generals’ regime when the Argentinian economy went through a soft patch.

Could a soft patch be coming up for the Chinese economy that might persuade the Standing Committee of the Politburo of the Chinese Communist Party to sanction war?  There are many assessments of the consequences of the blowout in Chinese debt and of the residential vacancy rate when such a big chunk of the economy is housing construction.  But perhaps the biggest red flag for the Chinese economy is this chart of monthly steel production from 1990: 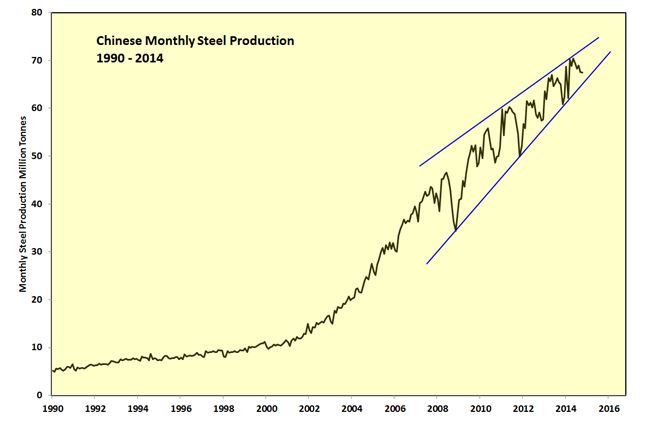 In the parlance of stockmarket charting, that rising triangular shape is a classic bearish ascending wedge.  It is a well-defined wedge that, if it were a stock, you would expect it to break down and go back to where it started from.  Such things usually fall three times faster than they rise.  On that premise, Chinese steel production’s most likely path from here is to halve from its current level by 2017.  This will be the end of notions of the Chinese economy eclipsing the US economy, the Asian Century and so on.  Which in turn is a problem for the Politburo.  Not because of the mandate from heaven aspect, but because nobody will fear China afterwards.  As the denouement of the China economy approaches, the Politburo’s window for waging war is closing.  Their best chance is when they still have an air of inevitability.

And China continues to prepare for war.  They have done a good job of convincing their neighbours that one is coming. Over 60% of people in countries bordering the South China Sea fear Chinese aggression and expect war.  The Chinese continue to convince themselves that war is inevitable.  A Chinese Government film made in late 2013 made for consumption within the party and the military, Silent Contest, began with these words:

“The process of China’s achieving a national renaissance will definitely involve engagement and a fight against the U.S.’ hegemonic system.  This is the contest of the century, regardless of people’s wishes.”

The basis of the film is that the US used cultural engagement with the Soviet Union to destroy that country and is also using cultural engagement to contain and divide China.  The fact that China considers itself to be involved in a titanic “contest of the century” with the U.S. would be news to most Americans.  But the Chinese are not content with having lifted themselves out of poverty by making geegaws.  They crave the respect that only a resounding military victory can bring.

In the South China Sea, once China has an ADIZ enforceable by an airstrip on South Johnson Reef (currently under construction), they will be able to make Vietnam and everyone else ask permission to cross the South China Sea.  Alternatively, a Vietnamese freighter from Hanoi to Japan, say, would have to hug the coast and add 3,000 km to its journey.

Now if the Chinese were actually planning on a war with the U.S., they would have a schedule and a list of things to do.  Things like demonising contact with foreigners, tightening control of public opinion, a personality cult for their leader and stockpiling of oil. Well, check, check, check and check.

China is also aware that President Obama is a weak leader.  While he has a commendable predilection for sanctioning drone strikes, he also has a well-established track record of not backing words with deeds.  That means assurances to Japan and others in the region that the US will live up to its treaty commitments of mutual defence might be treated as casually as many of his other undertakings.  There is a two year window until Obama leaves office. China is well aware that that window is closing and he will be replaced by someone likely to prove less feckless.

Fortunately for Japan, it is likely to prevail in a one-on-one with China, even if the US is not committed.  Both countries will attempt to strangle each other with picket lines of ships and unrestrained submarine warfare.  It is said that Japan is better militarily than it thinks and China not as good as it believes.  Both countries do suffering very well, however. Let us hope there is not enough to go around.

On Being Jobless in Our BS Economy