Maggie Thatcher used to say, ‘First you win the argument, then you win the vote’.  It has taken the Republican Party in the United States quite a while to start making the arguments against President Obama’s spend-spend-spendathon BigGovernment model of running the country.  But, finally, they started to do so.  And boy, did they win big!

The Republicans have taken more of the lower house, the House of Representatives, then they have had at any time since 1929.  And they’ve taken back the Senate..  Indeed, if Alaska and Louisiana break the GOP’s way, as now seems likely, they will have 54 of the 100 Senate seats.  No one much saw that coming. 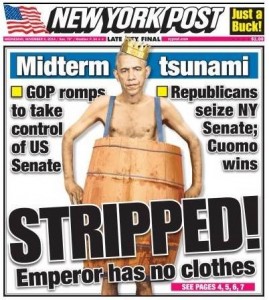 But perhaps most interesting of all were the wins racked up by the Republicans at the state level.  Governorships fell to the Republicans in numbers absolutely no one predicted.  They even took Maryland, possibly the most left-wing State in the US.  If it’s not, Massachusetts is.  And the Republicans took the gubernatorial win there too.

But the race I was most interested in of the many I followed was the one for governor of Wisconsin.   This is the Midwest state that borders the Great Lakes.  It was settled largely by people from Scandinavia.  They brought with them a thorough-going social democratic way of thinking.  No one would suggest that Wisconsin is the natural home of Republicans.

And yet, for the last three years Wisconsin has had a Republican governor by the name of Scott Walker.  He’s a small-government man and isn’t ashamed to say it.  He came into office and immediately took on the public sector unions — think Campbell Newman and then go up an order of magnitude or two.  He so infuriated the vested interests that they soon triggered a special recall election, which you can do in Wisconsin.  By history’s standard, that should have been the end of Walker. No governor facing a recall election had won one in ages.  Walker romped home, despite massive union support for his opponent and constant, noisy headline-grabbing mass rallies by activists, many from out of state.

There was also a struggle over the top judiciary.  And then came Tuesday election and Walker faced the electorate once more.  The Democrats poured everything they had into this race.  Obama desperately wanted a Walker loss.  So did the public sector unions.  The polls suggested it would be a nail-biter.  And yet, once again, Walker romped home.  He cleaned up.  He has now won three elections in four years.

You see, Walker has beliefs.  He acts on them.  But he’s unfailingly polite.  By no means could anyone call him a redneck.  He scares the dickens out of Democrats.  Keep your eye on this man.  Here is my wild, early prediction:  Should he decide to run, Scott Walker will win the Presidency in 2016.

And if you put that down to wild speculation (because it is), let me finish with this thought.  Wouldn’t it have been nice for the voters of Victoria, at least those on the right side of politics, if the state Coalition government had found two core beliefs to rub together these past few years.  Wouldn’t you Victorians like them to have done something?  Anything?  Even a shadow of the Walker way would have been nice.

Somehow, I don’t think Premier Denis Napthine’s crew will be winning three elections in four years.  Do you?

Singing in the West