The recent decline in majoritarian democracy is eroding the foundations on which the world’s  five oldest, most stable and  successful democracies — the United States, Canada, the United Kingdom, Australia and New Zealand — have been built and thrived. One could cite many examples, as I do in my book, Democracy In Decline,  but the saga of majority will overturned by unelected judges in the battle to legalise gay marriage in California is both instructive and deeply alarming.

In a world where the number of democracies has increased considerably in the last few decades, from 40 or so in the mid-1970s  to nearly 120 in 2005, my claim about democratic decline may initially strike many as a tad implausible.  But having dozens of countries move from dictatorship and one party rule to a set-up that manages to qualify them as plausibly or sufficiently democratic does not in any way prevent backsliding in established democracies over that same period of time.  Top end decline can happen concurrently with bottom end improvements, as many a dieter will confirm.

Let us go back to my earlier mention of same-sex marriage in California and recall the basic history.  Pro same-sex marriage advocates, unable to convince the Californian legislature, opted to go through the courts and, in May, 2008, the California Supreme Court ruled 4-3 in their favour.  The judges struck down a statute of the elected legislature confining valid marriages to those between a man and a woman.

This happened in the case known as In Re Marriage Cases. The decision was both highly criticized and highly praised, largely depending on the individual writer’s attitude towards the outcome.  However, California being one of the US States (along with Oregon and a few others) where there is an especially big dollop of direct democracy, opponents of the court’s ruling were not finished.  They gathered enough signatures to have a ballot proposition put to a citizens-initiated referendum that would change the California Constitution, adding a section that would read “Only marriage between a man and a woman is valid or recognised in California”.  This was the wording of the earlier statute the judges had overturned.

This ballot initiative was known as Proposition 8.  Those in favour of it spent $40 million in the campaign leading up to the referendum, and those opposed spent even more, some $43 million.  In total, this was one of the largest amounts spent on a campaign ever, excluding presidential campaigns. When the day of the referendum came, voter turnout was just a shade under 80 percent.  Proposition 8, which would restrict marriage to heterosexual couples, was approved by just over 52 percent of voters.  That meant the State Constitution had been changed. 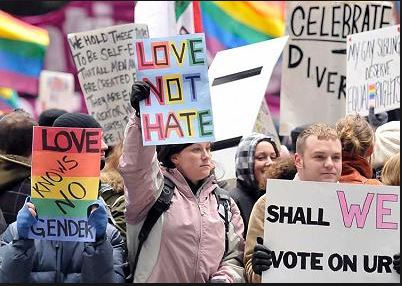 Winning the referendum and having Proposition 8 approved by a majority of the voters did not, however, end matters.  The losers went straight back to the courts, this time to have Proposition 8 itself overturned.  When this didn’t happen in the Californian State courts, and the Proposition was upheld as consistent with the State Constitution but not backdated, the federal courts were the obvious next port of call.

Eventually the issue reached the country’s top judges in the case of Hollingsworth v Perry and in June 2013 the US Supreme Court, 5-4, decided the case in favour of same sex marriage proponents on procedural grounds (namely that if the California government would not defend the ban on same sex marriage then proponents of Proposition 8 could not do so either, they lacked standing – meaning that the majority of Californians who voted for Proposition 8 had their views trumped by the judges, however indirectly).

And because many, many people celebrated that judicial outcome I recount the outlines of this struggle here simply as represent an example that for many people some things matter more than democratic input and majoritarian decision-making.  For many proponents of same-sex marriage in California, and elsewhere, what matters is getting it legalized.  If that requires the unelected judges to do so by adopting some sort of ‘living Constitution’ interpretive technique or to condone an elected government not defending in court the laws on its statute book, and if that means over-ruling the views, values, opinions, judgments or preferences of the majority of Californians, so be it.  Majoritarian decision-making be damned!

For those people, the perceived rightness or justice of their cause matters more than democracy.  The fact there is reasonable disagreement amongst smart, well-informed, nice, reasonable people on the issue does not lead them to want this issue decided by a letting the numbers count process.  Quite the contrary, they want their view of what is morally just and right to be upheld and implemented despite theirs being a minority view (at least outside the ranks of the judiciary), or at least they cannot be bothered to wait until they can convince enough others that theirs is no longer the minority view.  In shorthand terms we can think of this attitude as one favouring right outcomes, or rather the particular person’s judgment about right outcomes, over best or more defensible processes.  What is the most legitimate way to make decisions in a large group where people disagree takes second place for these people to getting what they judge to be the politically or morally right thing adopted.

Contrast that California history with the State of New York’s, where the elected legislature, not the judges, legislated for same-sex marriage.  The difference in terms of legitimacy is stark.

Now that brief account glosses over certain complexities, such as the relationship between representative democracy and direct democracy, as well as finessing when we can be satisfied that a vote really is measuring and determining the views of the majority.  And that leads on to the fifth possible way to respond to this book’s argument about the decline of democracy.  People in North America attack the majoritarian credentials of elected legislatures, often by pointing to perceived flaws in the voting system being used to choose its members.  From there, say from the claim that some particular elected legislature is itself deficient in majoritarian terms, they then move on to embrace a powerful role for unelected judges on the basis that the legislature itself is not perfect as regards democracy.

But this way of responding to my lament about the decline of democracy misses the obvious rejoinder that for any elected legislature in the US, UK, Canada, Australia and New Zealand – whatever the flaws you might perceive in the voting system used to choose its members and however far short you may think it falls from embracing some ideal of the popular will or Rousseau’s General Will – that elected legislature will nevertheless have massively more majoritarian and ‘letting the numbers count’ credentials than will nine unelected top judges.  So in any head-to-head comparison it is clear and beyond argument where the democratic legitimacy chips lie.  And so this way to respond to my lament amounts to a misdirection argument; it is a very weak argument.

What matters is how proposals fare in comparative terms, not how they fare held up against some perfect ideal. Majoritarian democracy delivers the best consequences, on average, over time. Its recent decline needs to be stopped and then reversed.  Starting now.

James Allan is the Garrick Professor of Law at the University of Queensland. To order Democracy In Decline: Steps in the wrong direction from Connor Court, click here