Party Poopers On The Magic Mountain

For some of the high-net-worth delegates who came by helicopter or snow-plough, Davos Man marks a unique stage in humankind’s evolution. A bunch of hunting-and-gathering hominids on the plains of Africa somehow transformed themselves into hunting-and-punting homo economicus, now a protected species endemic around watering holes in Wall Street and Lombard Street, or wherever folk gather to make, beg, borrow — or print and “quantitatively ease” — serious bucks.

Davos Man: 1. Member of wealthy global elite.  According to political scientist Samuel P. Huntington, they “have little need for national loyalty, view national boundaries as obstacles that thankfully are vanishing, and see national governments as residues from the past whose only useful function is to facilitate the élite’s global operations”. 2. Pejoratively, used as a synonym for Master of the Universe, Tom Wolfe’s sobriquet for Wall Street traders, scoundrels and investors.

For others, such as left-leaning academicians and the odd rock star, Davos Man is a less appealing chap; perhaps a close relative of Piltdown Man.  Despite sharing the commitment of his host, the World Economic Forum  (WEF),  “to improving the state of the world”, a suspicion remains that most of the 2,500 delegates who attend this invitation-only midwinter meeting are just “fat cats in the snow”  — folk addicted to high-altitude hyper-connectivity and the money game.

It was another man, however, who helped put Davos on the celebrity circuit a century ago: Thomas Mann. (He may – or may not – be related to the plaintiff, aka Hockey Stick Man , in the recent Mann versus Steyn defamation lawsuit.)

Inspired by his wife’s experience as a patient in Dr Friedrich Jessen’s Waldsanatorium, this Mann set his 1924 novel, Der Zauberberg (The Magic Mountain), in a Davos sanatorium. The region had become a popular destination for lung patients after Dr Alexander Spengler (1827-1901), a TB physician and pioneer of “Klimatherapie”, began promoting its microclimate as therapeutic.

Professor Klaus Schwab, WEF’s executive chairman – who may have read Der Zauberberg – ensures Davos Man is a man of the Zeitgeist by giving him regular makeovers and introducing new narratives. He established the “independent, impartial, not-for-profit” foundation in Geneva in 1971, naming it initially the European Management Forum. In 1998, for example, the Schwab Foundation for Social Entrepreneurship was formed “to identify, recognize and disseminate initiatives in social entrepreneurship that have significantly improved people’s lives”, basically Big Ideas with global “replication potential”.

When the planet entered the Age of Greening, WEF cannily joined the Carbon Cargo Cult Club. Greening economic growth soon became the new meme. For apparently it is

the only way in which sustainable, inclusive development can be achieved that will satisfy the basic needs of 9 billion people and provide them with equal rights to material prosperity. A key challenge is the urgent need to reduce carbon emissions to avoid the catastrophic impacts of global warming.

How would this work in practice? According to WEF’s Green Investment Report, a mere US$698 billion will be required — mostly from the private sector – to make LDCs “climate-resilient” and repay some of the developed world’s “climate debt”. (Investing other people’s money until it is all gone has a special seduction for those fond of “sustainable” semantics.)

Professor Schwab has another challenge. He is in “a constant fight” with corporations eager to gain control of his not-for-profit group, which receives about $200 million annually from sponsors. “We fight the commercialization of the meeting,” he said in a Bloomberg Television interview in Davos. “The forum is a great opportunity to tell the business community: You have to act in the global public interest.”

About 110 companies each pay 500,000 Swiss francs (US$550,000) annually to become a WEF “strategic partner” and get exposure, generating fee income of about US$60 million. Its 500 industry partners get a lesser package for 250,000 francs, raising US$140 million in additional revenue. The World Bank was one of them. Its president, Jim Yong Kim, again urged delegates to make this year the turning point on climate, while in another room PM Tony Abbott urged them to focus on other matters .

A year ago, I said at this meeting that we needed a plan for tackling climate change, a plan fit for the challenge that we face. A year later, we’ve seen great leadership on climate from countries and companies, but emissions are still rising and the poor are still suffering.

We don’t have a plan yet and the bits we do have are not equal to the size and challenge.

This is the year to take action on climate change. There are no more excuses. If we fail, our children and grandchildren will ask us why we didn’t act when it was still possible to do so.

This year’s theme was “income inequality”. The biggest risk facing the world was not climate change, but the worsening wealth gap. A let-them-eat-cake perspective was no longer an option, especially given the fate of French aristocracy in the 1790s and recent rise of an anti-globalisation movement.

When winds of change blow, Davos Man must change – and blow – too. Professor Schwab:

The Davos Man in the old tradition probably has some self-doubt. He knows that capitalism today in principle should be combined with deep social responsibility, with the concern for those who are left out.

Global elites who ignore the demands for more income equality, job creation and action on issues such as climate change do so at their own risk.

When you’re in a defensive mood, you want to keep as much as possible. So you become more short-minded, more egoistic.

Sceptics (not on the guest list) have found more than a rich lode of irony in the new rhetoric of concern. One money market guru posted this comment.

There is something morbidly gruesome and horrifying in watching the world’s wealthiest aristocrats, among them presidents and central bankers from the most “advanced” and emerging nations, as well as CEOs of the biggest corporations and oligarchs, sitting down in Davos – a place where cost of entry to the fortified fortress is US$40,000 – and discussing global inequality: the same inequality that their policies are responsible for. It is even more outrageous when one considers that according to the timely release of this week’s Oxfam report, the disparity in wealth between the haves and the have-nots has reached absolutely record proportions, surpassing any previous inequality gaps seen before and during the Great Depression.

Oxfam’s wealth pyramid shows that 29-million — 0.6% of the world’s 7,200 million people – own US$87-trillion, or about 40 per cent of all global wealth. Half of the world’s wealth is now owned by just one per cent of the population. Seven out of ten people live in countries where economic inequality has widened even further in the last 30 years.

This is the best kept secret; a testament to the systematic theft, plunder and pillage of the global middle class by a small cabal of global financial oligarchs – those who have control of the money printing presses, who have the financial resources to bribe the corrupt politicians, who in turn, have the legal and legislative authority to rig the rules of the game, and make this wealth transfer from the poor, not so poor and modestly wealthy to the wealthiest, possible.

Yet the Masters of the Universe continue to “generate a huge and ever-increasing portion of their wealth from the manipulation of money, speculation and outright swindling in the stock markets”, while central banks pump trillions into financial markets, driving up asset prices.

With the loathing came fear. An interview with Jaime Caruana, head of the authoritative Bank for International Settlements (BIS), sent global markets lower. The Year of the Horse had galloped in a week early, with Payback Time a nose in front of Quantitative Sneezer and Davos Dreamer. On 24th January, Caruana urged countries to “Unwind monetary stimulus even if markets are volatile”. The G-7 central banks should unwind their expansive monetary policies — printing money, in other words — while governments spend more energy on reforming and repairing their economies.

We tend to think it would be normal that there is some volatility (ie violent selling) and that the process of normalization should not be unduly affected by this volatility in markets. At the global level, the level of monetary policy accommodation is quite high and that doesn’t seem to be a situation consistent with lasting monetary and financial stability. Unwinding expansive monetary policies would likely be more complicated in the future than now. We should not assume that next year it will be easier.

It was not new. Mr Caruana delivered a similar message late last year. Ultra-low interest rates had allowed the private sector to postpone deleveraging, made it cheaper for indebted governments to finance deficits, and encouraged authorities to delay vital reforms. 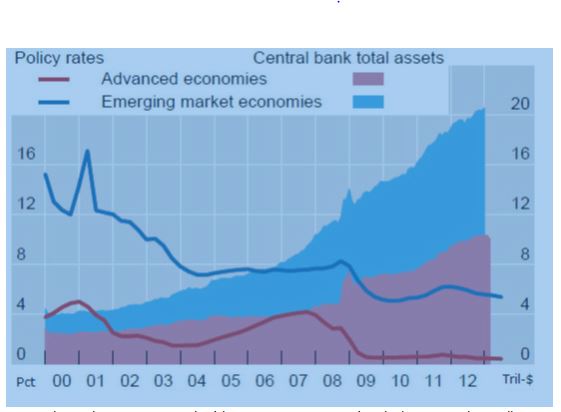 But perhaps the money men had been too preoccupied with the Santa Claus rally to read his 21 November speech in Kathmandu: on global risks to financial stability and the need to fill “cracks” in the regulatory framework.

He also had this warning for them – don’t put all your chips on the infallibility of crisis “prediction”.

One caveat I should mention is that, at the present state of the art, macro stress tests are still more useful as a crisis management tool than as an early-warning device. None of the many stress tests conducted before 2008 warned us about the impending crisis. This is because the art of stress testing involves the formulation of scenarios that are severe yet plausible. The subprime crisis actually unfolded in a series of scenarios that, before the event, would have been considered highly implausible.

How did central bank “unconventional” money-printing shenanigans affect the man (and woman) in the street? It depends on where you live and what you did with your money. Borrowers – especially governments – benefited enormously, as did investors who leveraged into property and share markets, especially in the US and Japan.

A November 2013 report from the McKinsey Global Institute has quantified the impact of ultra-low interest rates on economies. It tells an intriguing story.

From 2007 to 2012, governments in the eurozone, the United Kingdom, and the United States collectively benefited by $1.6 trillion both through reduced debt-service costs and increased profits remitted from central banks.  Nonfinancial corporations—large borrowers such as governments—benefited by $710 billion as the interest rates on debt fell.

Households in these countries, however, lost $630 billion in net interest income. Despite the official consensus that this experiment “prevented a deeper recession and higher unemployment than there would have been” – we will never know – it was cashed-up older folk with significant interest-bearing assets who paid a high price for its alleged “success.”

Central banks designed and implemented a mechanism that allowed high-spending governments to reduce debt-servicing costs and encouraged investors to become yield-chasing speculators, but at a substantial cost to others, especially the prudent pensioner class, and now LDCs as hot-money is withdrawn in response to US Federal Reserve QE “tapering”.

Mann’s main man in The Magic Mountain was Hans Castorp, the only child of a Hamburg merchant family. During his seven-year pre-war stay at a Davos sanatorium, we get a panoramic view of European culture and its tensions.

Discussing the book in The Atlantic in 1953, Mann said that “what [Hans] came to understand is that one must go through the deep experience of sickness and death to arrive at a higher sanity and health”. It was “a necessary passage to knowledge, health, and life.”

Today’s sanatorium for the uber-wealthy is a different kettle of homme d’affaires. While also promising therapeutic benefits, it is more capitalist think-tank — located, like Nietzsche’s Ubermensch, “6,000 feet beyond man and time” and life’s complexity and disorder – than monastic or medical retreat.

It remains to be seen whether Davos Man can acquire “higher sanity and health” by transforming himself into homo reciprocans – and whether WEF can sustain its balancing act. As the zoo keeper said, some species are best kept in different cages for their own safety.

The Genuinely Scary Side of Medicare

The bill comes due for Rudd’s quack cure