I have just been advised in writing by Peter Minter, the poetry editor of Overland magazine, that as of 2014 he will not be publishing ANY poets who publish in Quadrant and that he doesn’t ‘wish to have any association with the authors of a journal edited by Keith Windschuttle.’ His ‘New Year’s Resolution’ apparently.

This probably also explains why Mr Minter has rejected every poem I have submitted to him over the past two years. (I slipped a song lyric past him a few years ago but he probably doesn’t think that counts.)

Overland takes an interesting and a skewed position here – as Quadrant has never warned me off or censored me for publishing in any other Australian magazines, including those on the far left and, in fact, has even encouraged me to submit pieces a bit too edgy for them to The Monthly and Meanjin.

It’s pretty obvious here who is attempting to stifle dissent and who is encouraging dialogue.

But it is not surprising that this jaundiced view is filtering down into the poetry department: Jeff Sparrow, the editor-in-chief of Overland, has announced on their website that it is time for them to ‘ lead’ another ‘culture war’ against the ‘bloggers, the Quadranters and the other tin-foil loopers’ – which will no doubt further divide the arts community and ultimately hurt all writers in this country. Tin-foil loopers? Obviously, Mr Sparrow does not cook or he wouldn’t be so insulting to that glorious invention tin foil which, besides filtering out alien mind control frequencies and secret messages from old Communists and CIA agents, also keeps the roast from burning. 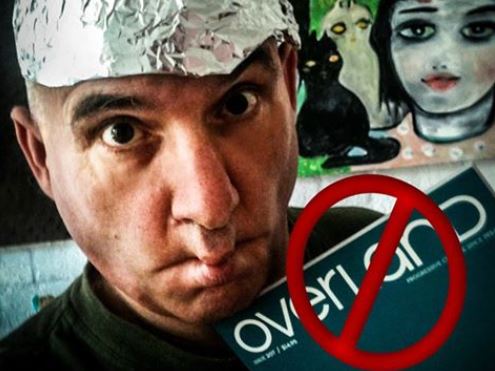 I wonder if the Overlanders are still smarting from being trounced in the last election? But the election was a no-brainer. I voted Labor and even I felt we deserved to lose. Labor didn’t know if it was Martha or Arthur. If Labor wants to win, just like any weak-ass sports team, they have to get some better players and a better coach. And one would hope that’s is precisely what is happening.

Overland‘s present ‘Mission Statement’ is way past its use-by-date and its partisan and divisive nature obsolete in the 21st century. Bag-headed post-60s revolutionary thinking. If they can’t have it their way, let’s ruin it for everyone. As John Lennon said, ‘Count me out . . . in.’ )

Why do Australian tax dollars continue to fund such a narrow-minded agenda that punishes fine Australian and international poets for being recognized, and spotlighted, by one of the world’s most esteemed and celebrated poets, not to mention an Australian Living National Treasure, Les Murray, the poetry editor of Quadrant? This is a great honor, not something to be chastised or ashamed of. (Doubly disgraceful, too, as Minter is a poet who has himself been published in an anthology edited by none other than Mr Murray. I didn’t hear him objecting with all this waffle then. Warning: shout this man a beer in the pub at your peril!)

If the Overland editors have a problem with Keith Windschuttle, debate him – or challenge him to a duel, or something ? Don’t take it out on the magazine’s poetry editor who has more insight about what constitutes real poetry and has been more celebrated for it than any other Australian poet in history. And don’t take it out on the rest of us struggling writers who need to have our work presented to the Australian public, in every poetic forum possible, free of political grandstanding.

Well, it’s all there in that ancient 50s name, isn’t it? Overland. Right. Cobb & Co. 1800s stagecoach mailbag dumb down.

Night Descends on Our Age of Reason