The notes from newspaper friends and former colleagues arrive every three months, regular as the seasons but with never a hope of spring.

“Did you see the latest numbers?” the first of Friday’s emails began, its narrative of lament expanded by the notes that came soon after and the trickle of others that arrived throughout the day. “Down 100,000 copies in the four years since we worked there! God help us,” said one. Wondered a second old hand, “Can you believe it? The Sun-Herald is now under 300,000 sales. What was it selling when you were there?”

It was a rhetorical question, inspired by the latest release of figures for newspaper sales. My correspondent, a fellow newsroom silverback, was old enough to remember when the Fairfax tabloid moved well over 800,000 copies every Sunday, generating profits of such magnitude it could afford to run a New York bureau out of a expensively leased office high above Times Square. That was where my desk was located back in the early Eighties, when there was nothing at all wretched about being ink-stained.

Great Train robber Ronald Biggs has turned up in Barbados, kidnapped by a crew of former British commandos? Head straight to JFK and grab the first flight to Bridgetown, not even bothering to check for the cheapest fare. Ronald Reagan shot?  Back on a plane and on to Washington, there to add a Strine voice to the jostling bedlam of questions being shouted on the hospital steps.

For a reporter, they were glory days. Who back then might have been so bleak to imagine they could ever end. Our readers bought newspapers much as they drank their morning coffee, drawing comfort from the familiar and, if we did it right, stimulation for the duration of a train ride or the morning’s smoko.

They say it’s all gone now and gone for good, blown away by the internet and tweets, the Facebookers and bloggers, so that no media outfit can any longer hope to turn a handsome dollar from the business of rendering yesterday’s events in ink and paper. Sad to say, all things remaining the same, they’re probably right. The economics of the news business have been hit so hard they are out of whack. No matter how brave the words of media CEOs, the vaunted transition to digital just isn’t bearing fruit, at least not the rich harvest needed to support the capital-intensive overheads of Old Media’s huge presses, overseas bureaux and fleets of delivery trucks.  Online ads generate roughly one-tenth the revenue of the printed page, and that is on a good day. Try running an old-style news operation on that sort of cash flow and see how long you last. As the latest circulation figures and waves of endless layoffs at both Fairfax and News Ltd attest, not long at all. Indeed, down here in Melbourne, where The Age now sells a pitiful 142,000 daily copies in a city of almost 4 million – two-thirds what it moved when the city’s population was half that size — we’ll be lucky if there are still two papers on the streets by Christmas.

Not long ago at a reunion dinner, and well into the second or third bottle of red, a former colleague raised a toast to the salad days we had known before the Great Wilting. Glasses clinked and then, as the cheese and port arrived, the bitterness returned. To an eavesdropper it would have sounded like bitchiness, which to a certain extent it was. Did you see The Age’s latest double truck on two and three! Which sheltered workshop staffs their layout desk? And pictures, can you believe how badly they use them? It was agreed The Age’s ham-fisted attempts to work with its new tabloid format made the point.

The very first edition of the new “compact”, as Fairfax’s tabloid-shy brass prefer 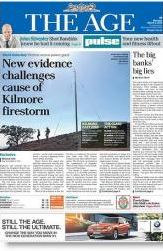 to call it, should have gone all-out to pull eyeballs and assure readers the paper was reborn, revamped and revitalised, and that its new format signified something more than a desire to trim paper costs. So what image did The Age deploy to showcase its fresh beginning? Incredibly, it was a photo of two tiny figures in the empty Kilmore paddock where the worst of the Black Saturday’s fires began more than four years earlier. Newspaper? Make that oldspaper. As a front-page splash that expanse of empty grass had all the appeal of rotting meat.

Meanwhile, buried inside, was a magnificent snap of a SWAT team cop at a domestic siege in the outer suburbs. The incident had driven neighbours from their homes, tied up traffic, dominated radio broadcasts and pre-occupied police for more than a day. Yet The Age’s masters saw nothing worth featuring in the image or, indeed, in going hard with the story the rest of Melbourne had been talking about without pause. In the newsrooms of old, authority resided at an institution known as the back bench, where senior editors decided what to run and how and where to run it. The consensus at our malcontents’ dinner was that if The Age still has a back bench it is now used only to store reporters’ bicycle helmets.

We’re all stuffed and so is the business we loved, it was generally agreed, but not, thank God, with absolute conviction. It is a soul-crushing thing to surrender all hope while a heartbeat remains, however weak. Just as reporters hunt the angle that rivals have overlooked — the hidden aspect that advances a good yarn and keeps it running — so did our old farts’ assembly wonder if there might not yet be a future, given editors who can lead and, most of all, an honest self-appraisal of what is wrong.

“Honest” is the key word: a newspaper might delude itself, but it can never fool its readers, certainly not after the first breach of trust has been noted.  And sadly, trust has been violated in many and various ways. If you screw up and won’t admit it, if you put partisan reporting ahead of facts, don’t expect to hear the continued clatter of readers’ gold coins.

Why, for example, did The Age not bother to report the Climategate emails until the warmists’ allies had conducted their, ahem, independent inquiries and concluded those habitual graph-tinkerers at the University of East Anglia are fit and proper scientists  thoroughly deserving of their grants and travel allowances? Presumably because the roundsman is a warmist and his editors lacked the wit and will to say, “Hang on! People are talking about this – we need to cover it, whether or not you think it deserves an airing.”

Or why was a three-person panel of senior Fairfax reporters so keen to give Prime Minister Gillard a clean bill of health  immediately following the surprise press conference she convened to resolve “all questions” concerning her involvement with a light-fingered boyfriend and the disappearance of AWU funds. Nothing to see there, they all concluded, nodding in unison like toy dogs in an earth tremor. Watch the video at the link above and marvel. Once, and not too long ago, reporters were known for foot-in-the-door brazenness; now it seems the natural posture is genuflection.

An honest newspaper with honest editors would have included at least one Gillard sceptic in that video’s choir, even if the paper’s editorial position is that the nation’s leader is a woman beyond reproach. After all, many readers do not share that view, so it would have been a basic courtesy to see their questions addressed, their doubts given voice. Again, watch the  video and decide if you are observing journalists or true believers. Fairfax CEO Greg Hywood can prattle all he likes about the web’s competition, and good luck to him for maintaining with a straight face that his shrunken circulation numbers are actually a sign of improving health, in that his papers have reduced readership to a devoted core. He might believe it, and his execs can publicly insist they are likewise convinced, but an audience reduced to an amen choir is no part of any sane business plan.

And pardon me if I also inject a note of personal grievance. Four years ago, I published a book on the Black Saturday fires which The Age duly reviewed. The book is critical of the acronym-encrusted emergency response system which muddled and futzed and dissolved into chaos as Victoria burned — the state’s chief emergency officer, then-Police Commissioner Christine Nixon, infamously removing herself from the control room to enjoy a long dinner as 173 men, women and children were turned to ash. Other alleged leaders of the emergency team were also mentioned, as were the deficiencies of their departments, one of those being then-Emergency Services Commissioner Bruce Esplin.

Well guess who The Age selected as its reviewer? A senior functionary in Esplin’s department, that’s who, and a man with whom I had several spirited exchanges while researching the book. His job was not revealed in the reviewer’s bio, nor was mention made of our disagreements. What readers learned instead was that I was a product “of the tabloid hothouse”, that the book had been written in six months and that, on the whole, much better books on the fires must surely be coming. What particularly made the review such an appalling abuse of priveilege and newsprint was the fact that the reviewer, a former Age journalist, had from time to time edited the Inside America column I contributed for almost a decade to the Sunday edition.

Whatever my deficiencies as a writer, that failure to disclose was dishonest, and soon to be compounded by cowardice. Of numerous letters to the editor, written not by me but the book’s admirers, only a small part of a single missive was ever published, and that stripped of all reference to the reviewer’s conflict of interest. While The Age purports to report the facts, unpalatable admissions of its own fecklessness appear to be beyond the pale.

In the grand scheme of things, it was a small matter. But to the people who wrote in my book’s support from Kinglake, Nillumbik and other fire-ravaged areas, it was a wake-up. Never again would they trust The Age, just as those who waited (and waited) for coverage of Climategate can never again believe the paper reveres impartial inquiry above partisan sentiment. It would be a fair guess that those ignored correspondents and denied readers now number among The Age‘s former readers, the ones Hywood insists he is so glad to have shed. How many other of the formerly faithful have turned their backs for similar reasons?

Honesty would have seen a correction, an admission of error. But that was not to be. And sad to report, the tradition of burying error continues at The Age’s Sydney sister, as will be detailed in Part II.

Good Sense from an Unpalatable Man

Language, Crime and Trial by Headline