Where would Australia Day be without its annual parade of grief and shame? This year’s mustering of tear-drenched cliches has produced a bumper haul. Here are some of the weepier ones:

Sporting singlets and thongs and draped in Aussie flags, they descend, after an afternoon of drinking, upon the cities and towns for a night of thuggery in the name of patriotism. – Nicholas Herriman at New Matilda

You can’t believe in multiculturalism and support a flag that asserts the primacy of the Anglo race. We need a flag that reflects the equality of our citizens, not vaunts one lot over other. – Peter FitzSimons in the SMH 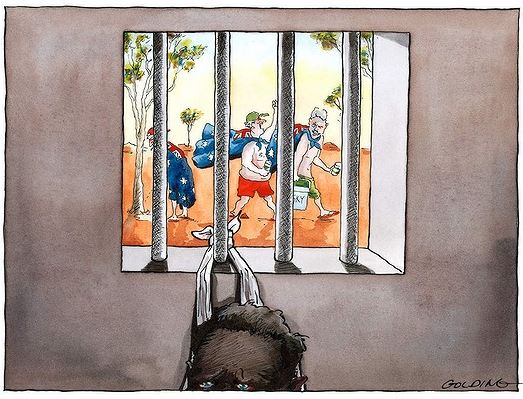 It seems that whenever Australia Day begins to loom before us like a great patriotic blackhead on the nose of our calendars, the spectre of racism rears its ugly, flag-draped head. –Ben Pobje at The Drum

Sorry, proud Aussies, I don’t get you. I don’t agree with you. This is not just the Southern Cross-tattooed proud Aussies I’m talking about, the VB drinkers watching footy in the bars of Kuta. This is all the Australians who pronounce pride in their place of birth, who are the first to grab you in some foreign hostel and tell you what’s so damn great about Straya. – Ben Groundwater on Fairfax websites

In this landscape of ruin into which the continent has been transformed by the inventions of a patriarchal neo-colonialism, we have created a weird imitation of affluence suspended between the shadows of the catastrophes of the past and of those yet to come. It is like living on a plain of bones – Stephen Wright at Overland

These are Australia’s foundation stories, in all their ugliness and pain. It seems perverse and absurd to locate our nation’s origin tale in our invasion of a foreign land on the other side of the world in pursuit of the fraudulent goals of a fading empire – PM Newton at The Drum

‘Solid Rock’… taught me, as a teenager, to question the narrow, white, European narrative that accompanies the flag-waving on this day. It encouraged me to begin to dig deeper and challenge the well-spun myth that Australia Day is something to celebrate when in reality it marks an invasion, occupation and attempted decimation of a culture. – Donna Mulhearn at Eureka Street

Washing Hands in the Blood of Statues

The Nationals: From Black Jack to Brokeback