Obama, Toast of the Antipodes

In a poll undertaken by the BBC, Australia comes second, just after France, as the country that prefers Obama over Romney by a staggering 68% to around 7%. I find this astonishing, especially in a country that has largely seen through Gillard and the ALP.

Here is the graph with all the relevant numbers: 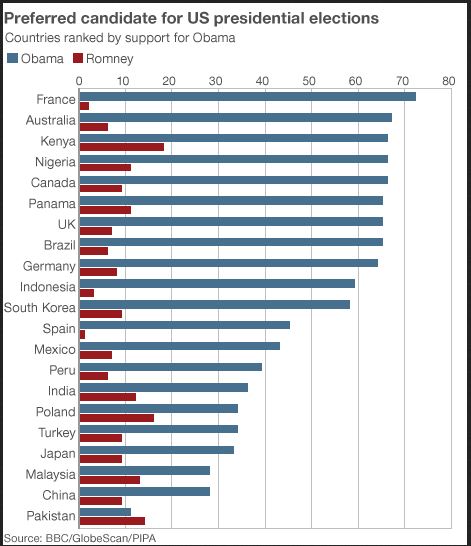 This can only be explained by a media wall of silence that has prevented even a glimmer of positive news about Romney from filtering through to the population in general. But there must be more to it than that since the Australian results are almost identical to the Canadian ones, and Canada is closer to the US and ought to know better. On the other hand, the Great White North is the sort of place where activists campaign noisily to ban Fox News and then lie about their “success” when those efforts fail. Exposed to the journalistic biases of the Canadian Broadcast Corporation and the Great White North’s other, mostly liberal, news organs, Canadians also tend to believe they have the world’s best healthcare system, which they like because it is free. That’ll get ’em every time, even when the contrary evidence is overwhelming.

The following shows the same data in order of where Romney is preferred. He is the favoured candidate nowhere else but in the US, which is all that matters. But for there to be virtually no appreciation of Romney anywhere in the world, and a preference for Obama, is quite surprising. I do note, however, that Israel was left off the list which I think unsurprising, given the left attitudes of the BBC, but it is an omission of quite some importance. Leaving the survey as it is makes it seem  the entire world is of the same view, but including what I think would be the likely outcome in Israel would, if published, perhaps have a positive effect on Romney’s vote 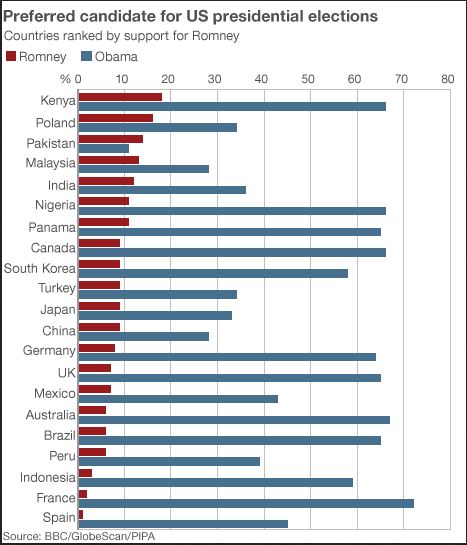 The Madness of a Raving Realist

The God of Science