A Tale of Two Shoes

Everyone now knows about one shoe: the navy-blue suede size 36 number that slipped off Julia Gillard’s right foot as she was rushed by AFP security from Canberra’s Lobby Restaurant to her Prime Ministerial car on Australia Day. 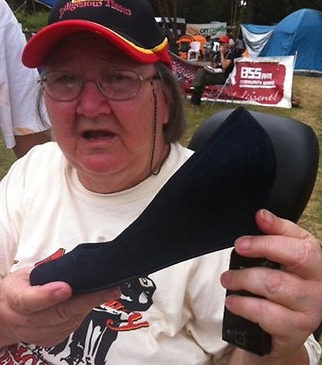 It has emerged as the only “pretty memento” in a “grubby” saga described as “one of the ugliest moments in Australian politics”.

But how many know about the other one? Also a right shoe, ironically, it too slipped off the foot of a woman under duress. Place: the crowded tarmac of Sydney’s Mascot airport. Time: 19th April, 1954 Will the PM’s blue-suede shoe have an impact on national politics as dramatic as this “Red Shoe”?

Its owner was Evdokia Petrova, an officer in the Soviet Ministry of Internal Affairs (Ministerstvo Vnutrennikh Del, MVD) and wife of Vladimir Petrov. He was a colonel in (what became in 1954) the Committee for State Security (Komitet gosudarstvennoy bezopasnosti, KGB) and a Cold War defector. Sent by Soviet security chief, Lavrentiy Beria, he had been working as a Third Secretary at the embassy here since February 1951. Stalin’s death in 1953, however, was a game changer. Beria was shot by his successors. Petrov, convinced he would meet the same fate if he returned, defected on 3rd April, apparently without his wife’s knowledge. The quid pro quo – 5,000 pounds and all the documents he could bring with him.

Two armed MVD ‘diplomatic couriers’, Jarkhov and Karpinsky, arrived to take Petrova back to the Soviet Union. Arriving at Sydney airport on the morning of 19th April, they were confronted by an angry crowd. Many believed she was being taken back by force to be executed, especially the Eastern European immigrants.

The crowd broke through police cordons as they crossed the tarmac, rushed forward and surrounded them. Mrs Petrov’s clothing was grabbed in an attempt to hold her back, but she was pulled on board with the crew’s assistance.A newsreel of the event captured the mayhem. Narrator: “Mrs Petrov’s shoe – lost in the struggle – is secured by a bystander”. The camera zooms in on it, held above the crowd by a triumphant – and anonymous – pair of hands.

In her 1956 book, Empire of Fear, Mrs Petrov described the incident:

Under the floodlights of the airport I saw the milling crowd like a roaring sea around us. I lost my right shoe, and asked my escorts to get it back for me, but they would not stop.

The saga did not end there. PM Menzies, unsettled by the drama and its possible impact on an approaching election, radioed the pilot of the now airborne plane with a request to establish (rather late in the day) whether Mrs Petrov was ‘happy’ about being escorted back to the USSR. When she did not – or could not – give a clear answer, he instructed ASIO to terminate the flight in Darwin during a refuelling stop, which it did on the morning of 20th April. The couriers were confronted on the pretext of illegally carrying weapons and Mrs Petrov was offered asylum again. She finally accepted after speaking to her husband by phone, but remained very fearful for her family in Moscow.

Was it a Cinderella Moment? Had good (ASIO) not triumphed over evil (KGB) and married love (apparently) over King’s Cross? After interviewing Mrs Petrov for “many hours” for the National Library in the mid-1990s, author Robert Manne found the affair more “bizarre” than romantic.

“The reality”, he wrote in a July 2002 obituary, “was somewhat different. When the Petrovs were reunited in Sydney there was a flaming row. Evdokia accused her husband of stupidity. What did he think would happen to her family now? For many months her "long wailing cries" echoed inside the safe house during the night.”  For her, had freedom become just another word for nothing else to lose?

“She was bright, vivacious, courteous and kind,” wrote Manne. “ASIO, to its credit, offered her support throughout her life.” Among the many Royal Commission on Espionage exhibits showing them ‘relaxing’ post-defection, there is a photograph of her winding wool with smiling ASIO officer Ron Richards on the verandah of a safe house. They sure did things differently in those days.

The fate of Mrs Petrov’s lost shoe was unknown for decades. Was it actually red or was this symbolic colouring, a distortion to assuage strong anti-communist public sentiment? Fortunately, we now know the truth. The nation’s roving diplomat, Sir Les Patterson, recently outed himself as the new owner, presumably acquiring it from the bystander who waved it above the crowd at the 1954 airport fracas.

“As you can see, it’s red,” he said, and (sniffing) “there’s still a strong odour of fear too”. (Interested readers can see it on display at the Dame Edna Everage Cultural Centre, Moonee Ponds, or the annual Canberra Spy-catcher Exhibition.)

There is another dimension to this intriguing tale. Is the shoe affair an omen of some kind? For Swiss Jungian analyst, the late Marie Louise Von Franz, the shoe is a symbol of power, hence expressions like being ‘under a person’s heel’, or ‘stepping into one’s father’s shoes’:

Shoes are the lowest part of our clothing and represent our standpoint in relation to reality – how solidly our feet are planted on the ground; how solidly the earth supports us gives the measure of our power. [Sigmund Freud had some very Freudian views on shoes too, but that’s another MA-only story.]

So how solidly are the PM’s feet on the political ground? Will there be another Cinderella – or Machiavellian – Moment before this tale runs its course? Or will it be a Moscow – or even a Dr Evatt-Molotov – one? Will someone be going – like Mrs Petrov – “to Russia, with love”? For want of a shoe, will a kingdom be lost? Do you have  a mole at the bottom of your garden? If Oliver twists, Mr Smiley, and the plot thickens, read your Dickens. Watch your back if you glorify Midas; but if the shoe fits, wear it.

Well, you can knock me down,
Step in my face,
Slander my name
All over the place.
Do anything that you want to do, but uh-uh,
Lay off of my shoes
Don’t you step on my blue suede shoes!

Michael Kile is author of No Room at Nature’s Mighty Feast – Reflections on the Growth of Humankind. His latest project is The Devil’s Dictionary of Climate Change.

If Only Alan Joyce Knew About Dubai