We went to see a brilliant stage production of One Flew Over the Cuckoo’s Nest at the weekend. And I emphasise that it was brilliant so that it will be understood that nothing I say here is to be seen as a reflection on the production itself. It was almost three hours of pure entertainment.

I first read the novel sometime in my hippy/university days early in the 1960s and loved it for its anarchic hilarity and the lessons it supposedly gave us about the nature of the world. 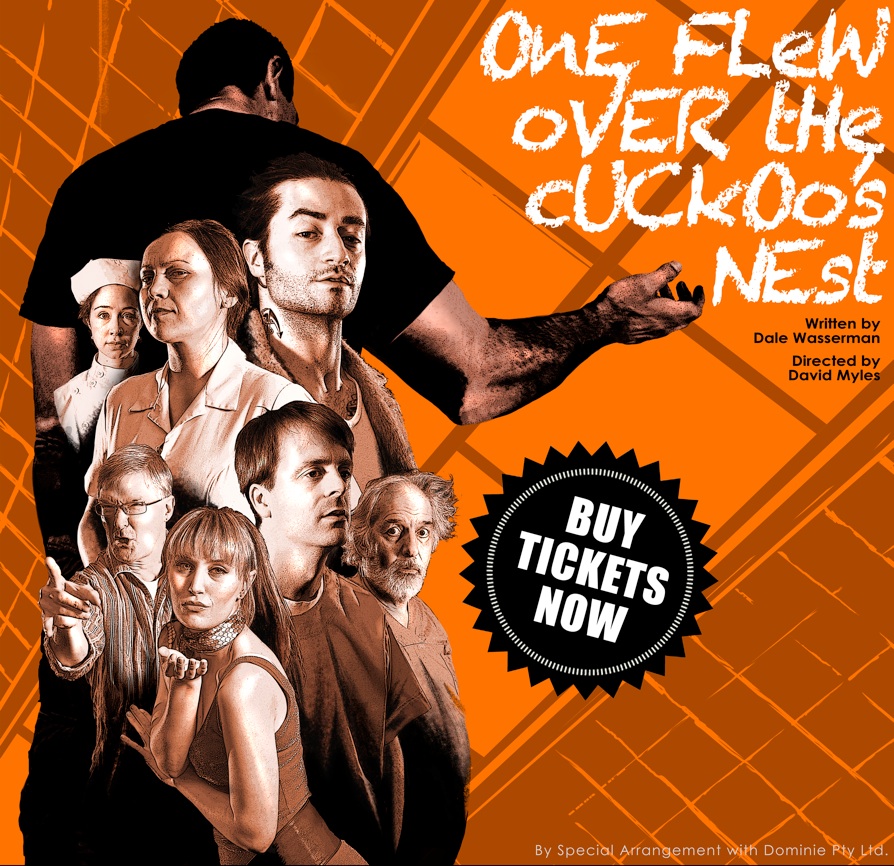 But already by the time the movie came out in 1975 my attitudes had so changed that I must have been the only person I knew who hated the film, even though it was a perfect representation of the story as written. The story was the same all right; it was me that was different. It was my reaction to the movie that was part of how I found out about those subterranean changes that had taken place in political views without my really being aware.

The play, like the book, takes place inside a locked ward in a mental institution. The patients are unable to cope with the demands of the outside world. A kind and caring therapeutic environment has been set up to shield these people from the realities of having to live amidst the rough and tumble of everyday life.

Into this until-then calm environment is introduced McMurphy, the Jack Nicholson character of the film. He is a troublemaker, hates authority of any kind. He is there because he had been jailed and as part of his jailhouse duties was expected to contribute to the maintenance of prison life by working at some chore. To get out of this work, he has himself committed to the asylum. The main protagonist is thus a work-shy criminal – and a gambler who takes the savings of his fellow patients, as it turns out – who will not conform to the demands of any society into which he is introduced.

Nurse Ratched, the villain of the book, film and play, is in charge of this ward. The story is allegorical; it is not stretching anything to say that she represents civil society at large. She is trying to maintain order in a world where the massed forces of entropy are always in play. She is the established authority where in this particular instance everything she is trying to do is for the benefit of others even if what to do is never as clear cut as one might wish. McMurphy sets out to challenge her at every turn.

It is interesting to see how well the story does not weight the narrative to make Nurse Ratched an actual villain. You might not agree with the actual therapies applied to the various patients, but the intention is to help. She may get seriously angry, but she is only human and it has been McMurphy’s specific intention to make her angry, and she has plenty to be angry about. Whatever else, McMurphy has no answer to the problems the patients have and she at least might. By play’s end, their lives were certainly made worse by McMurphy’s presence. Had he never shown up, the final tragedy would never have occurred. Placid though there lives would have been, these were patients with genuine mental problems.

It is also quite interesting how the doctor assigned to the ward, the one “intellectual” in the narrative and the representative of elite opinion, works to undermine Nurse Ratched’s authority. Rather than backing his on-the-spot centre of local authority who must deal with an approaching crisis as best she can, from the distance given by only visiting the ward on occasion, the doctor pulls the rug out from under her time and again. She sees the problems McMurphy is causing which he refuses to do.

It is the audience reaction that is, of course, the most disturbing part. They do not see McMurphy as a problem but the representation of a free spirit and personal liberation. I on the other hand see him as the essence of what society must protect itself against. The Occupy Movement was McMurphy writ large. A novelist can structure his narrative to obliterate the jagged bits that jut out, and can smooth over elements that would make you appreciate just how much you would dislike a McMurphy if he entered your world in reality. One can say it’s just play but I think it is a state of mind as well. The book was an underground classic when it was first released back in the 1960s, appealing to counterculture types like myself. Now it is the mainstream. It represents the common view of just about everyone. We are not better off as a result. It would be a much healthier society if everyone took a far less indulgent attitude to this anti-social pest and recognised him for the menace he truly is.

And as a final afterthought, it was in part because of One Flew Over the Cuckoo’s Nest that we have closed down our asylums and “liberated” these former inmates. You can now find them sleeping in doorways all across the world.

Election Fraud and the AEC

What to Expect if Pell is Cleared