Are the lights going out all over Europe?

Is it possible that serious political observers are ‘waxing desperate with imagination’ or is there something rotten in the state of Denmark. No—make that Germany. With just five weeks to Christmas there are conspiracy theories in the air and they most certainly have a theatrical ring to them —which more than likely gives these theories much credence.

None other than the editor of The Spectator, Fraser Nelson, had this to say in an article he wrote for the November 12th edition of his magazine:

The Old Opera House in Frankfurt—once Germany’s most beautiful post-war ruin and now its most stunning recreation—has become a symbol of European rebirth. And it was here, last month, that Angela Merkel and Nicolas Sarkosy met the EU’s bureaucratic elite in what would, in another era, be described a putsch.

According to Fraser Nelson, what Merkel and Sarkozy were up to was the removal from office of the publicly elected prime ministers of Italy and Greece, 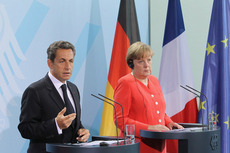 and their replacement by techno-econocrats of Merkel and Sarkozy’s choosing—with the blessing of Brussels’ autocrats. Or was it the other way around? And how did they do it?

What is it about opera houses, the Germans and democracy? It was on March 23rd 1933, that Adolf Hitler commandeered the Kroll Opera House in Berlin to get a majority of the Reichstag to disempower themselves by passing the “Enabling Act” which gave to Hitler unlimited authority. It was also in the Kroll Opera House that Hitler gave, on 30th January 1939, his intentions for the Holocaust, by proclaiming:

If the international Jewish financiers in and outside Europe should succeed in plunging the nations once more into a world war, then the result will not be the Bolshevizing of the Earth, and thus the victory of Jewry, but the annihilation of the Jewish race.

Back in the Kroll Opera House, three years later (26th April 1942), Hitler dragged the then Nazi members of the Reichstag into their last session to proclaim him “Supreme Judge of the German People”, which allowed him to override the whole German legal system and government administration—as though he didn’t already.

So it is with some irony that we might wonder what went on in the Old Frankfurt Opera House on the night October 19th 2011, besides the conducting by Claudio Abbado. It would appear that Angela Merkel and Nicolas Sarkozy, surrounded by the leading EU bureaucrats and technocrats from Brussels, had what you might call a “Who will rid me of this meddlesome priest” moment—or in their case “Who will rid us of these meddlesome prime ministers”, moment. Merkel, Sarkozy and the ‘crats’ even named their hit squad, “Groupe de Francfort”.

According to Fraser Nelson, the target of the Frankfurt Group was the removal from office of the freely elected Prime Minister of Italy, Silvio Berlusconi, and the freely elected Prime Minister of Greece, George Papandreou. Or as he said in the sub-headline of his article, “If you thought the EU couldn’t get any less democratic, meet the Frankfurt Group.”

In far-away un-democratic lands such as, say, Tunisia, Egypt, Libya, Yemen and Syria the deposing of unelected tyrants, by interested outside powers and forces, is called regime change. To date it has required either a vast series of protests, or an uprising from within, with much killing and slaughter before foreign powers feel free to intervene. Apparently the normal formalities for regime change doesn’t apply to members of the EU—at least as far as France and Germany are concerned. But since it’s formation, the EU has always just been a cosy France and Germany, surrounded by a collection of vassal, conforming states.

As followers of the EU experiment would know, the EU doesn’t have a functioning parliament, as we understand the term. EU Members of Parliament don’t have deciding votes of policy or EU laws. That is the prerogative of the bureaucracy. The bureaucrats make the policy and simply send out directives to the vassal states. The once noble Parliament of Westminster has had more than half of its legislating powers surrendered to Brussels based bureaucrats. It is though valium is regularly placed in the UK’s drinking water!

In this week’s Weekend Australian, philosopher Tim Soutphommasane (a usually left- leaning thought-smith) wrote an intriguing article entitled “Government by nerds one step from tyranny”. In this article he says:

It is like the Revenge of the Nerds, European style: the technocrats are now in charge. Well, at least they are in Greece and Italy, where Lucas Papademos and Mario Monti respectively have been sworn in as prime minister. Pause for a moment to consider exactly just what happened.

The equivalent of what has happened would be for a former Reserve Bank of Australia or Australian Competition & Consumer Commission chairman to be given a parliamentary seat, then appointed prime minister.

The notion that “experts” can rule without having to answer to citizens emerged in this country some weeks ago when two of our “public intellectuals” deemed the practice of government by technocrats not only acceptable, but desirable.

The professors, Robert Manne and Clive Hamilton, in recent articles, suggested something along these lines in regards to ordinary citizens butting out of the debate on climate change.

What technocrats need, to seize power from parliaments, is the sort of moral ineptitude that the German Reichstag exhibited in 1933, 1939 and 1942. What ordinary citizens need is to be aware of the march of the technocracy and do everything to ensure that they never get a foothold in our political system.

What Europe seems to have quietly experienced in the Old Frankfurt Opera House may end up being the most serious failure of democracy in Europe since the Second World War. And what is more curious is that our verbose Foreign Minister, Kevin Rudd, has been silent on events in the Old Frankfurt Opera House. It is so easy to criticise China, Burma and North Korea on democracy—what about a word about Germany and France’s dance with the devil?

What’s in a name?