Nick Dyrenfurth and Tim Soutphommasane are academics and regular newspaper columnists. Soutphommasane has a weekly feature in The Australian called ‘Ask the philosopher’. Don’t.

Nick Dyrenfurth and Tim Soutphommasane have edited a book of essays called All That’s Left: What Labor Should Stand For. It was published by New South, the University of New South Wales publishing company. 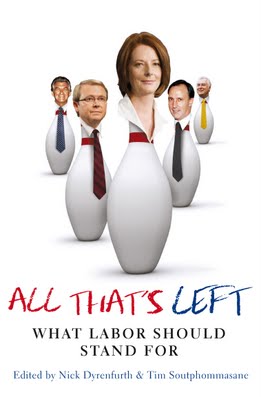 Touted as collecting the wisdom of ‘Australia’s leading social democrats’ – the editors included essays by themselves – it was the usual collection of self-flattering Left groupthink. But in the introduction the academic editors made an ad hominem attack on Keith Windschuttle and Quadrant and lied about a Forum I edited for Quadrant Online:

For a long time, the Right have only been able to define themselves negatively, as in the pages of the increasingly paranoid Quadrant under Keith Windschuttle’s editorship. One may usefully consult the magazine’s vituperative response to the ‘What’s Left?’ series of commentaries about centre-left politics published by The Australian last year, which involved turning over an entire edition to debunking what one contributor termed the alleged postmodern evils of the Left’s ‘creationism’.

This is projection on an epic scale. For, while Quadrant devoted page after page to dissecting the Left, no accompanying explication of a positive conservative philosophy – or even disposition – was forthcoming on what it meant to be on the ‘Right’.

In 2009 The Australian commissioned a series of articles on the Left. Called ‘What’s Left?’ it wasn’t very interesting. In essence it collected the usual group of Left opinion writers and asked them to talk about the Left. I thought it would be more stimulating to publish a collection of articles by a diverse collection of writers (one was a member of the ALP) commenting on the Left. The writers I asked were Mervyn Bendle, John Dawson, Bill Muehlenberg, John Muscat, Andrew Norton, Angela Shanahan and Jason Soon. There was a lot of interest shown by readers and it was decided to republish the essays in Quadrant.

Though I’m personally flattered that Dyrenfurth and Soutphommasane say it was ‘projection on an epic scale’ I’m afraid they are wrong. They either did not bother to check or are lying and misleading their readers when they say the Forum, ‘What’s Left of the Left?’, took over an entire edition of the magazine. That edition of Quadrant (Jan/Feb 2010) had 128 pages – excellent value, as that’s the equivalent of a large book. Rather than devoting ‘page after page to dissecting the Left’, the Forum took up 11 pages: that’s 7 authors, 11 pages.

By comparison, the Dyrenfurth and Soutphommasane epic has 214 pages and 10 authors – that includes a 14 page introduction by the editors, two essays by them and their 9 page postscript.

I’m sorry they find Keith Windschuttle’s editing of the magazine ‘increasingly paranoid’. That month the magazine had an article on human rights and religious freedom by Cardinal Pell (it was the featured cover article); Damien Freeman on Tony Abbott’s political philosophy; Keith Windschuttle on the ‘Stolen Generations’; Michael Evans on stoic philosophy and the profession of arms; Paul Monk asked ‘What hope for western civilisation?’; John Stone on Howard’s ‘eleven decent years’; Mark McGinness on Edna Everage; Patricia Anderson on Edmund Capon; and Simon Caterson on a general theory of hoaxes. There was poetry, short stories, reviews and more. Subscribe here…

I wrote a short introduction which explained how the Forum had come about and what happened when we published it:

When our Left Forum appeared, the general reaction, on the Left side of the internet, was that we had committed an act of lese-majesty. The Left does not like being critically discussed. One horrified internet site opened a discussion which elicited 326 responses. Few of the bloggers [like Nick Dyrenfurth and Tim Soutphommasane?] had even bothered reading the articles. The Left is quite out of touch with dissent.

The sensitive to criticism editors were particularly bothered because a Forum writer used the word ‘creationism’. Misleadingly, they claimed that the whole issue of Quadrant had been used for ‘debunking what one contributor termed the alleged postmodern evils of the Left’s “creationism”.’ It wasn’t. The guilty man was economist Jason Soon and this is what he actually wrote:

Insofar as the notion of social justice appears to derive from some strange anthromorphic conviction that somehow the blame or credit for the distribution of income and wealth arising over the course of numerous trades can be laid at the feet of some single entity with one will of its own , it is the left’s form of creationism. Such creationism is in contrast to the more evolutionistic vision of a spontaneous order or an invisible hand as articulated by classical liberal thinkers such as Friedrich Hayek and Adam Smith.

After the abuse and mistruths in the book’s introduction, Nick Dyrenfurth wrote on culture (finding room to plug a book by his co-editor) and Tim Soutphommasane (finding room to plug his own book) lectured on ‘Social justice and the good society’. Seriously. The joint postscript was titled ‘What Labor should stand for’, and Wayne Swan and Greg Combet performed the book launches in Canberra and Sydney. Seriously.

Dyrenfurth and Soutphommasane abuse Quadrant for not dealing with what it means to be on ‘the Right’ in a Forum devoted to ‘the Left’ by authors who aren’t all on ‘the Right’. Perhaps their publisher, New South, or the newspaper they publish with, The Australian, would be interested in commissioning a book or series of articles on All That’s Right? Happy to oblige.

Michael Connor is the editor of Quadrant Online

Dreams of a Better, Nicer World