If Jonathan Swift were alive today, how would he handle the exquisite arguments of the climate-alarmists? How would he have countered such notions as Tim Flannery’s fleeting estimate of a 60 metre sea-level rise or Kevin Rudd’s predictions of the demise of the Great Barrier Reef (it should be on the way out now), or Julia Gillard’s great-big-tax on something that you can’t see, touch, feel, smell or live without. And because carbon dioxide is associated with human beings’ need for heat, (coal, oil, gas and wood) you could say the Carbon Tax is actually a tax on fire.

Swift would have most likely used his satirical powers to expose the ridiculous, by being ridiculous. “Once we have used up all the wind with wind-turbines—what then? And as every climate-scientist knows, wind-turbines will slow down the rotation of the Earth and we’ll all fall off.” Or perhaps he might have speculated that when the sun notices that we are covering the surface of the earth with solar panels, it will try to get its sunlight back by erecting Earth panels?

Writers down through the ages have been awake to those who use the infectious force of “hysterical or mistaken belief that a disaster is imminent”, for power, control, financial gain or personal aggrandisement—or simply, indulgent, creative-ignorance. More dangerous, and expensive though, is when imminent-disasterism is used for ideological purposes. When you can’t get in to see the Oracle of Delphi because the place is full of scientists examining the entrails of the Great Crested Grebe, you know the only option left is to start reading fairy stories and reciting fables.

A good starting point is Chicken Little (aka Penny Henny ), and her “The sky is falling” theory that had the whole barnyard in a flap for ages. In the American version, Chicken Little gets hit on the head by a falling acorn and decides to go and tell the local King her theory that the sky is falling down. On her journey she meets other gullible types who join her. There’s Cocky, Drakey, Ducky, Turkey and Goosey. Of course what Chicken Little manages to do is create fear and tremble within the anxious group. When they meet up with Foxy, they all agree to follow him to his lair for protection. A bad move. 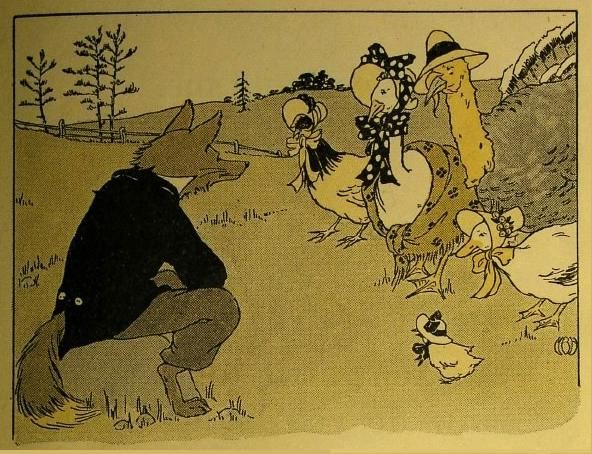 Strangely— you never know where climate-change research will take you—the Chicken Little-Henny Penny story falls under an esoteric area of literature research called the Aarne-Thompson-Uther classification system and is listed under “Chains Involving Other Events #2029 to #2075”. ‘The Sky is Falling’ is #2033. More interestingly, the Chicken Little theme can be traced back 25 centuries to Buddhist manuscripts so we can conclude that fear-mongering has a long and distinguished pedigree.

In the above version the Buddha apparently commented upon some local hysteria, and reflected it was of no special merit, but rather like ‘the noise the hare heard’. Buddha went on to tell the fable ‘of a hare, disturbed by a falling fruit, believes that the Earth is coming to an end. The hare starts a stampede of the other animals until a lion halts them, investigates the cause of the panic, and restores calm. The fable teaches deductive reasoning and subsequent investigation.’

Going back to post 2007 when the new treasurer Wayne Swan was just getting the feel of the political landscape, and needing something to talk about, he used a fairy story to try to create “a noise the hare heard”. He launched into his “the genie’s out of the bottle” campaign. The ploy was simple. Something fell from the sky, hit his head and he started yelling “Inflation, inflation … the genie’s out of the bottle … inflation”. The Canberra Press Gallery gathered around and spread the word. The dastardly Howard government had stuffed inflation into a bottle, but clever, clever Wayne Swan had found the bottle and rubbed it. In the Aladdin story it is nearly always a lamp or a ring that needs rubbing to summon the genie.

Unfortunately for Wayne, he got everything wrong. When the genie emerged it wasn’t inflation that was the problem but the looming Global Financial Crisis.  Quick change to another fairy story location, Ali Barber’s cave (that is the Australian Treasury), and the magic words “Open Sesame”. The genie container (bottle) was passed onto Julia Gillard and when she rubbed it she wished for a Building the Education Revolution. When Peter Garrett got his turn to rub it was for a pink batts drama. Then our Kevin had a rub and up popped the genie with “the greatest moral challenge of our time”. For Senator Conroy it was $43 billion NBN wish. Confucius say: Never trust bottles, rings or lamps bearing genies.”

What all this has in common is the use of mass hysteria and paranoia. According to a paper delivered to a conference in Hawaii in 1998 by John R Landry, untitled: “Can Mission Statements plant the Seeds of dysfunctional Behaviour in an Organisation’s Memory” (truly!), he said, “Fear-mongering—whether justified or not—can sometimes elicit a societal response called Chicken Little syndrome, described as ‘inferring catastrophic conclusions possibly resulting in paralysis.’”

As long as the climate-alarmists, and the Australian Labor government, uses devices, statements, reports, advertising and propaganda that are likely to induce the Chicken Little syndrome, how on earth can they be taken seriously?

The Carbon Tax caper is based upon notions that defy rational thought. If the world is undertaking actions that are failing to make any difference to the world’s CO2 output, like the failed EST experiment in Europe, the failed wind-power experiments in both Britain and Denmark and the nonsense solar roof-top panels in Germany, why would Australia go down the Carbon Tax route? To make a multi-billion dollar point that will have no impact on the world’s CO2 emissions?

Life on Earth constantly evolved and conformed to changing weather patterns. Deserts have come and gone, forests have disappeared then returned. Seas have risen and fallen. To imaging that humans can control weather—or fix it to a setting—prescribed by man—is possibly the ultimate ego-trip.

PS In Chicken Little, most versions have Cocky, Ducky, Drakey, Goosey and Turkey, eaten by Foxy.