An end to dhimmitude in the UK? 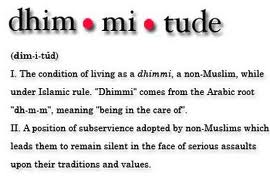 When Lee Kuan Yew of Singapore mused about the requirements necessary for Muslims to be able to integrate into advanced, democratic societies he was excoriated by the usual intemperate suspects for saying so.

Now David Cameron has declared an end to “passive tolerance” of divided communities, and said that members of all faiths must integrate into the wider society and accept core values.

To be British is to believe in freedom of speech and religion, democracy and equal rights regardless of race, sex or sexuality. Everyone, from ministers to ordinary voters, should actively confront those who hold extremist views.

Well, isn’t it about time for some sanity on this issue. I remember a much earlier warning — try 1840 — in Tocqueville’s Democracy in America. Considered by many as the best book ever written on democracy, it still contains remarkable insights into the importance and fragility of present day democratic systems. In particularly, he noted that Islam, because it came with “political maxims, civil and criminal laws, and theories of science” as well as a “body of religious doctrines”, was inimical to democracy.

It is just this conflict that Cameron distinguishes, as does the wise ex Prime Minister of Singapore, and as did Aayan Hirsi Ali in Australia recently, but to deaf media ears.

Mr Cameron draws a clear distinction between “Islamist extremism” as a political ideology, and the Islamic faith itself. “We need to be clear: Islamic extremism and Islam are not the same thing,” he said.

The Government is reviewing its entire strategy for counter-terrorism and community cohesion amid concern that the state is working too closely with Muslim groups that do not fully endorse liberal values. Mr Cameron says that community groups will be scrutinised in future to see if they promote democracy, equality and integration. Those that fail the “tests” will be cut off. “No public money, no sharing of platforms with ministers.”

Is it too much to think our Australian Government will come to its sense and end our passive tolerance, or dhimmitude, towards  Australian tax payer funded activities of Islamic groups in the name of multiculturalism.

If there were any doubt about the Australian Government’s funding of doubtful and potentially dangerous Islamic groups under the guise of multiculturalism, read this post by Andrew Bolt.

The Islamic Youth Movement used to meet in Australia’s biggest mosque, the one in Lakemba presided over by Sheik Taj Din al-Hilali, for years the Mufti of Australia, despite praising suicide bombers, backing the Hezbollah terrorist group, calling the September 11 attacks “God’s work against oppressors” and saying uncovered Australian girls invited rape.

Among its activities, the IYM published a magazine called Call to Islam, edited by Bilal Khazal.

In it appeared fawning interviews with members of some of the world’s worst terrorist groups, including the one that bombed the World Trade Centre in 1993 and another that killed 58 tourists in Luxor, Egypt.

It even interviewed—and praised—al-Qaida chief Osama bin Laden, who’d already declared war on the West and was planning his September 11 attacks on the United States.

It also published articles by extremists such as its translator, Keysar Trad, now head of the Islamic Friendship Association, who wrote: “The criminal dregs of white society colonised this country, and now, they only take the select choice of other societies, and the descendants of these criminal dregs tell us that they are better than us.”

Now here’s how our government-funded prophets of multiculturalism and their fellow travellers dealt with this hotbed of imported hate and us-against-them separatism.

Khazal’s youth movement was not punished (at first), but given three government grants. Two were multicultural grants totalling nearly $7000 from the NSW Government, to teach its supporters not English but Arabic.

The other was a federal work-for-the-dole grant to spruce up its office and arrange its library of propaganda.

Whose life is it anyway?