The movie which I have come to praise rather than bury is, of all things, Dreamworks’ latest animated offering Megamind. I chortled right through my first viewing of it, and then made my nephew (already goggle-eyed from Tron: Legacy in the cinema next door) come and see it while I sat through it a second time. The fact that it was half-price Tuesday also had something to do with this, but nonetheless this movie is genuinely funny, not too long, moves fast, and has many amusing in-jokes: Megamind’s star turn as Marlon Brando as Superman’s father as ‘Space Dad’ to budding superhero Titan is worth the ticket just by itself.

The story goes thus: two babies are jettisoned from dying planets, and land on Earth. One is picked up by a rich and privileged family and given every advantage in life. The other bounces into the local Prison for the Criminally Gifted and suffers constant rejection by his peers. These two grow up to become arch-rival superheroes Metro Man (good; voiced by Brad Pitt) and Megamind (bad; voiced by Will Ferrell). After years of being soundly thrashed by the forces of good, Megamind accidentally manages to kill Metro Man and win control of Metro City. His initial triumphant (but tacky) binge turns to dust and ashes when he realises that he misses his old rival, so he decides to create a new one from Metro Man’s DNA (obtained from some dandruff flakes on his old superhero cape) injected into a random human being, so that he will have someone to fight with again.

While I don’t want to pick a fight with any passing theologians about Hollywood’s marked tendency towards Pelagianism, I do think there is much in Megamind to praise. Girl reporter and heroine Roxanne Ritchi (who looks like a brunette Cameron Diaz and is voiced by Tiny Fey) is feisty, but not irritatingly so. She responds warmly to ‘Bernard’, a skivvy-clad intellectual (who is Megamind in disguise), and they genuinely enjoy each other’s company as well as being united in their common cause to rid Metro City of its new overlord. Along the way, they discover that these two components make up true love – Roxanne recovers from her infatuation with Metro Man’s chin-led charms, and Megamind discovers for the first time what it is to love and be loved.

Megamind has been adversely compared with The Incredibles, and I can understand why, but the comparison doesn’t really work because it’s a different type of film: it actually has more in common with the first and best Shrek movie. The good guy superhero Metro Man is so clean-cut that you simply have to suspect something, and when we visit his den – lined entirely with pictures, relics and statues of himself – the penny starts to drop. Metro Man’s solipsistic rationalisations of his ‘early retirement’, his eager perusal of self-help books, and his desire to become a rock star all say a great deal, very quickly. And if you don’t thrill to Marlon Brando impersonations, then at least pay up for the privilege of hearing how badly Brad Pitt can sing when he wants to.

Meanwhile Hal, Roxanne’s dorky cameraman who inadvertently becomes Metro City’s new saviour, has a one-sided, obsessional, and entirely unrequited love affair for Roxanne which is blown up to insane proportions by his inrush of new powers. The crude and childish drawings of his proposed superhero costumes, which he proudly shows to Megamind, are strangely disturbing. Hal/Titan has no character to speak of; he is a 27 year old adolescent hooked on computer games and gormless yearning after Roxanne, and so it is no wonder that the plot unfolds as it does (no spoilers). My only complaint is that Hal is the one fat guy in the movie and thus naturally worthy of mockery; such a pity he didn’t instead look exactly like Mark Zuckerberg, so that we could all have had another really good laugh at his expense.

Megamind himself turns out to have the best character of all; underneath those studded black leather ensembles is genuinely good material that just needed a chance to thrive. Megamind is probably the most attractive role I’ve ever seen Will Ferrell play, and it’s probably because I can’t see Will Ferrell playing it that I warmed so much to this big-blue-headed monstrosity. And – my trump card – how can any red-blooded Quadrant reader resist a movie which uses the poster below as a running gag? 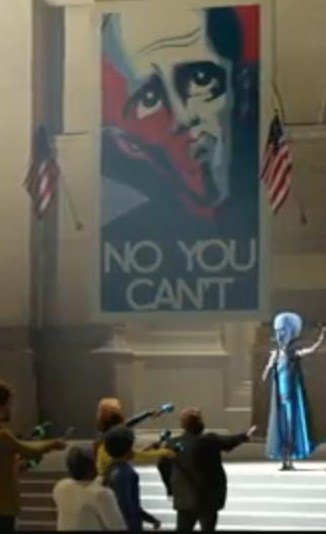