The most revelatory book for me this year was The Rational Optimist by Matt Ridley. 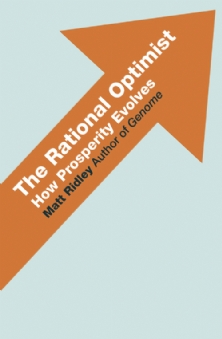 It’s a perfect foil for the pessimism of the Left, and an inspiring Christmas present for anyone wanting to understand Mankind’s stunning economic progress, or who worries about environmental problems or world poverty.

Coming a delightful second, is Bill Bryson’s Mother Tongue, a re-issue in Popular Penguins, and cheap at $10. It is an informative and amusing book about our mongrel but infinitely flexible English language; light enough to dip in and out of over the holidays.

From the same Popular Penguins, I also came across the economist Niall Ferguson’s Empire, an enriching paddle through Britannia’s rule of the waves.

A recent book that affected me profoundly was Infidel by Aayan Hirsi Ali. An extraordinary and moving biography, it should be compulsory reading for anyone wanting to understand the problems with Islam and why and how it threatens the West.

On the more poetic, contemplative side, The Nature of Things, by the first century BC philosopher, Lucretius, is a wonder to behold. Translated by A. E. Stallings (Penguin Classics) into rhyming couplets that capture the spirit of the original, Lucretius was able to effectively flag, one thousand years before the Enlightenment, the importance of disinterested observation in discovering the laws of nature and the nature of Man.