Is Peter Coleman our most productive public intellectual?

I don’t think that Peter Coleman was even on the list when Robert Manne was voted our Number One public intellectual. However when you have a look at PC’s track record over a period of half a century it is very impressive. Robert Manne is not in the same class, certainly not when you contemplate his post-Quadrant career.

He has played many roles: editor of magazines and books, journalist, elected Parliamentary representative, writer of memoires and biographies (his own, Barry Mackenzie, whoops, I mean Barry Humphries, Bruce Beresford and James McAuley),  and a prolific reviewer and commentator.

The books. The list on Wikipedia is very incomplete. 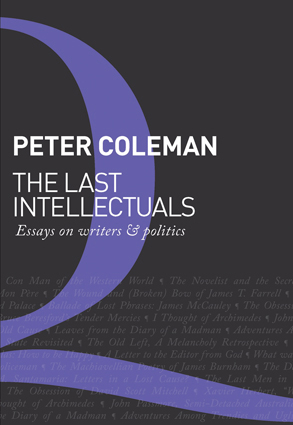 The latest, a rich and varied collection of essays and reviews.

1989 The Liberal Conspiracy. The Congress for Cultural Freedom and the Struggle for the Mind of Postwar Europe. New York: The Free Press (Macmillan). 333 pages.

More of his books and editorial contributions are listed here. Such as:

The collection of essays on Australian Civilisation which he edited (the introduction which he wrote was on line but the link is now dead).

His biography of Barry Humphries. Chapter 1 and Chapter 20 on line in the Rathouse.

The biography of Bruce Beresford Instincts of the Heart, 1993.

The recent biography of Heinz Arndt.

Editor of a collection of “incorrect essays” by unfashionable thinkers.

Editor of Quadrant for many years, plus editorial roles with The Bulletin and other periodicals.

His outsanding work in this field is his critical history of censorship in Australia, demonstrating that he is by no means a conservative of the kind piloried by Hayek, but a true classical liberal. Duffy and Snelgrove reprinted the book in modern times.

This is a rerelease of Peter Coleman’s classic account of the various efforts throughout history to censor the written word in Australia. It runs from 1788 to the early 1960s, when the fight against censorship was largely won. It focuses on a series of fascinating characters and exciting fights over publications dealing with sex, religion and politics.

Duffy & Snellgrove are reissuing this book because of its entertainment value (due to Coleman’s wonderfully light but effective style, and the intrinsic interest of its subject matter), its importance as a work of popular history, and its new relevance at a time when there are increasing attempts to censor the Internet. The book contains a new introduction by the author, and a cover illustration from George Molnar.

When it first appeared the Rhodes Scholar and dag Ross Campbell wrote in The Tele “Australia used to be as famous for her book-banning as her cricket. Her achievements in that field deserve to be recorded, and Peter Coleman has done so in this notable book. It is a Wisden of banning.”

In sporting terms Coleman was probably never the best on the field, or the winner of medals at the end of the season but it would not be a surprise if his team mates voted him the “game ball” for the effort and the example that he provided.

The Russian Revolution and its aftermath was the defining issue of the 20th century to assess the integrity and credibility of journalists, commentators and intellectuals. The  overwhelming majority failed the test. Peter Coleman and Robert Manne did not. This prompts the idea of an essay to compare and contrast the careers and contributions of  these two public figures.

They were both prepared to make the hard yards when it was very unfashionable in intellectual and academic circles to tell the truth about communism. Later on Robert Manne lost the plot, but that is another story.

The Hymn to Him