Debating the Case of Roger Hollis 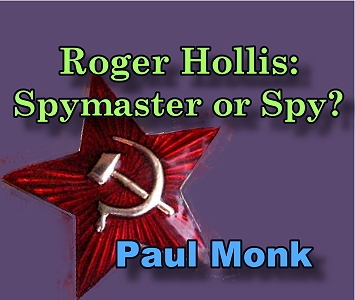 In the May edition we published the following letters to the editor received from Chapman Pincher, Tennent H. Bagley, and John L. Wilhelm:

SIR: In his detailed critique of the authorised history of MI5 (compiled by Christopher Andrew and published under the title The Defence of the Realm) Dr Paul Monk (April 2010) drew attention to allegations, in that book, that Peter Wright, the former MI5 officer who retired to Australia, had been suffering from “paranoia”, a delusional abnormality which had induced him to interpret normal events as “conspiracies”. That stigma was extended, in the book, to include all those other officers of MI5 and MI6 (the Secret Intelligence Service) who shared Wright’s suspicions while they were serving on secret official committees set up to investigate the evidence. It also applied to investigative writers, like myself, who have put the evidence on public record and reached similar conclusions. Presumably, it still applies to me because I recorded the evidence in full in my book, Treachery, published as recently as 2009. Now ninety-six, I am prepared to undergo any psychiatric tests which MI5 cares to fund to establish the degree, if any, of my “paranoia”, present or past.

I spent nine long days questioning Wright at his home in Cygnet, Tasmania, in October 1980—only four years after he had left MI5—and am better qualified than Professor Andrew to comment on his mental condition at that time. Both Wright and I had been trained in the scientific discipline and I queried everything he told me. Though Wright had a blood disorder, it was under control and I found his intellect to be razor-sharp and his exceptional memory intact. (In addition to being the defence and scientific reporter for a national newspaper, I was also the medical reporter and had read widely in the psychiatry journals.)

No MI5 officer had ever released such a cascade of revelations before and I knew that they would cause a furore when I published them—as I did in 1981 under the title Their Trade is Treachery. So there was extreme need to ensure that Wright’s statements were accurate. They all proved to be so with one exception which the British Prime Minister, Margaret Thatcher, was advised to inflate as a hopeful means of belittling the whole book. This related to a previously top-secret document known as the Trend Report.

In 1974, in secrecy, the then Prime Minister, Harold Wilson, induced Lord Trend, a retired Cabinet Secretary, to re-examine the evidence of Soviet penetration of MI5, with special reference to the Hollis case, which he did, leisurely, calling in witnesses, including Wright. Both Wright and another witness I questioned left Trend believing that he had agreed that there was a prima facie case for suspecting that there had been a spy at high level in MI5 and that the evidence extended from the entry of Hollis in 1938 to his retirement in 1965. That is what Wright told me and that interpretation, which I reported in my book, proved to have been misguided. Though the Trend Report has never been published (an academic who sought its release in 2009 was told that it still remains classified “on grounds of national security”) the authorised history of MI5 revealed that Prime Minister Wilson wrote on his copy of the report, “This is very disturbing stuff, even if concluding in ‘not proven’ verdicts”. A former Attorney General, Sir Michael Havers, who read the report in the line of duty, had already confirmed to me that Trend had reported that the suspicions against Hollis could not be proved and, unless and until they could be, he should be given the benefit of the doubt.

Nevertheless, Mrs Thatcher read a prepared statement to Parliament, so worded that it immediately led to the myth that both she and Trend had positively “cleared” Hollis, with MI5 recently re-stating that on its website. The stark fact that everything else which Wright told me and which I published has proved to be true was set aside.

The Peter Wright image has since been bedevilled by that fact that in 1986, when he made many public appearances at and around the Sydney court case about his own book, Spycatcher, his condition had deteriorated so much that, when interviewed or photographed—usually in a big drover’s hat—he seemed a ridiculous figure. Further, to enhance his case, he had begun to manipulate the truth, as was established by an investigation by the UK Metropolitan Police, to which I gave evidence.

During my previous thirty-three years of investigative journalism in Fleet Street I was repeatedly accused of being deluded when stating that certain Labour MPs (including a Minister, John Stonehouse) and some trade union leaders were Soviet agents. The authorised history has now confirmed that I was right and that they were taking Soviet Bloc money. The book, however, omits the case of Tom Driberg, the treacherous former MP and Chairman of the Labour Party who operated in the KGB’s interest (code-named Lepage) but also worked for MI5. Disappointingly, as Dr Monk stressed, the book ignores so many other far more influential Soviet agents who operated and escaped unscathed, through MI5’s incompetence (or worse), that I join him, wholeheartedly, in his demand that Professor Andrew must address these deficiencies in his authorised history (perhaps before it is issued in paperback) before it can serve as a trustworthy record of Soviet espionage.

SIR: Like many other veterans and historians, I regret that so many unanswered questions (and distortions both intentional and unintentional) continue to block efforts to write a reliable history of the intelligence and counter-intelligence events of our times. Of course, some of this will inevitably remain until all still-secret files are opened, especially in Moscow. But that won’t be soon, so today’s efforts to bring out what can be known, and keep it in the open, are all the more valuable and laudable. Thus we owe thanks to you at Quadrant for publishing online Paul Monk’s excellent article, which shines light on important and unresolved questions surrounding former MI5 chief Roger Hollis which an “authorized” history had blatantly tried to dismiss out of hand.

I send you my congratulations and regards.

SIR: Paul Monk’s “Christopher Andrew and the Strange Case of Roger Hollis” is a brilliant summation of the serious concerns shared by many historians of intelligence about Andrew’s recently published “authorized history” of MI5.

As a former Time magazine national and foreign correspondent, who has upon occasion tried to teach university students our craft, I am a staunch practitioner of the “old school” of journalism: namely, facts matter. As an intelligence historian and long-time follower of the tumultuous debate over the Hollis allegations, I and many others had great hopes that MI5’s “official historian” could reveal new information from the Security Service’s archives that might shed new light on this contentious case. But, as Monk points out, Andrew deliberately kisses off this important piece of history.

The Hollis debate, coming some fifty years after the events have passed, may seem a trifle esoteric, an exercise best left to us “intel wonks”. But as readers of your journal understand, history does matter—and facts do matter. Unlike several other, less well-informed reviewers, Monk clearly understands this, pointing out that Professor Andrew’s failure to deal with the Hollis case “is, frankly, an insult to serious readers”. I couldn’t agree more.

When Christopher Andrew came to the USA in November to flog his newly published book, he refused requests to meet privately to discuss the Hollis case, saying, “You’ll have to come to Cambridge to talk about it.” When questioned after his public presentation at the Spy Museum in Washington, DC, he again refused to discuss Hollis, answering only with his ad nauseam ad hominem: “Anyone who pursues this case is nothing but a conspiracy theorist.”

It’s obvious that Paul Monk is no conspiracy theorist. Nor is Chapman Pincher, the British intelligence historian whose dogged research and analysis of the case Monk summarises so aptly. Hollis may or may not have been guilty of espionage. But the facts and the circumstantial evidence against him are definitely worth serious debate.

It’s very disappointing—and quite odd—that in all of MI5’s archives there was nothing that its “official historian” could cite in order to add understanding to the Hollis case. My hope is that Monk’s well-informed essay will serve to catalyse a major international discussion of this case, stimulating officials to open their archives and others to contribute what personal knowledge they have of these events. Unless new sources step forward, we may have to wait a millennium or two for the GRU’s files to open before some resolution is found to this persistent mystery.

In the meantime, kudos to the author and to Quadrant for publishing this important essay.