The lie of genocide

Supporters of the “Stolen Generations” story have a case they should answer in Keith Windschuttle’s The Fabrication of Aboriginal History, Volume 3, The Stolen Generations – 1881-2008. Windschuttle makes nearly 656 pages of well supported charges against the whole story, little of which can be easily dismissed. Basically he is saying that a huge edifice of politics, journalism, education, history, international condemnation and fiction has been built on shaky foundations. 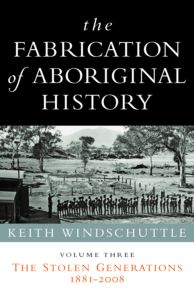 The beginning, he writes, was a rather speculative, poorly researched academic pamphlet published only in 1981. There had never before been any mention of the subject over the previous 50 years of increasingly intense Aboriginal activism, including the ebullient, “tent embassy” activism of the 1970s. The charges in the pamphlet, with its catchy title, however, appealed for various reasons to a lot of people on both sides of the racial divide. The breakthrough was the 1997 Human Rights and Equal Opportunities Commission report, Bringing Them Home. This report, Windschuttle says – and it is obvious to anybody who reads it – makes sweeping charges in its introduction which simply are not born out by the body of the report or the slender reference material given. Its strength – and it is a strength – is quotations from interviews with about 500 people of indigenous descent who say they, understandably, did not like having to grow up separated from their birth families and wanted to tell their story. But none of them give reasons for being taken or seem to know much about the circumstances at all. The report’s authors did not attempt to inquire into circumstances or to get the other side of the story from surviving care workers.

Windschuttle says those removed were classified as neglected. The HREOC report does not say – and nobody has yet really documented or even seriously argued – if the law was enforced too zealously or exceptions should have been made for Aborigines. Only a tiny proportion were “full bloods” or adopted by whites or from intact families. Most were encouraged to stay in contact with their families and living conditions were often good. He estimates at 8250 the total number “taken into care” between 1880 and 1970, most placed in government, church or charitable institutions. This contrasts with numbers often given in recent years of between 50,000 and 100,000.

Windschuttle says the “breeding out the colour” charge often made is just wrong. There were suggestions in the 1930s that mixed blood women should be forced or encouraged to marry whites, but for the Northern Territory the Lyons Government of the day specifically rejected it. Rather than removal of indigenous children being government policy, those in charge often complained that governments, federal and state, did not make available anything like the funds needed to place those urgently needing care.

Windschuttle says he does not deny that there were mistakes and some over-zealous officialdom. But he says the frequent charge, much aired overseas as well as here, of a great government plan to eliminate aboriginality, let alone of “genocide”, is plain wrong.

On Living in a Pandemic Age