The West in a Nutshell

From the author’s preface to The West in a Nutshell:

Many years ago, a talented friend, who had just been offered a Rhodes Scholarship, confided in me that his secret ambition was to become “a Bloomsbury essayist.” My own ambitions at that point in time were somewhat more grandiose. In the event, as fate would have it, I became the essayist, while he went on to a serious career in the government service. The essays I have written are pieces written, as the occasion presented itself, or the mood took me, over the past decade. Each was written for the sheer pleasure of trying to articulate a thoughtful position on the subject in question.

The book contains three Parts, each consisting of ten essays, and each offers a guide as to where the interested reader may find further good reading on the subject. Part I revolves around the question: What are we as human beings and how did we assume a position of such presumed mastery in the world? Part II centres on the question: What is our Western heritage as regards the nature of truth? It begins with the difference between myth and history and ends with the difference between metaphysical certainty and scientific circumspection. 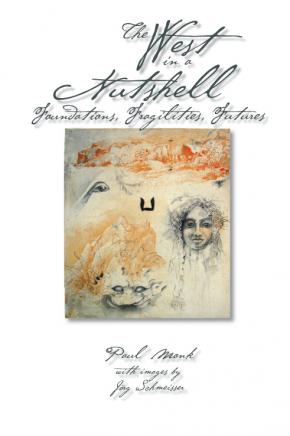 The essays in Part III address a range of pressing questions that have arisen in our time and seek to bring to bear upon them something of the wisdom derived from the sources drawn on in Parts I and II – as well as the best contemporary sources I could find.

Plutarch, Montaigne and Emerson not only served as models for me in the art of essay writing; they also accompanied me intimately as I prepared this book for publication. I found myself thinking of Plutarch, who studied at Plato’s Academy in Athens, during the reign of Nero, and would, in his later years, be visited by admirers from all over the Roman Empire, coming to his estate at Chaeronea for the pleasure of conversation with him. The West in a Nutshell is an offering to all those who still enjoy such conversation. It is my humble equivalent of the famous marble chair from which Plutarch presided over the dialogues at Chaeronea. If I do not actually preside over dialogues, I hope this book might at least stimulate them.

Montaigne, at 38, was weary of the ways of courtiers and the corruptions of reason in the religious strife of his time. He retreated to the tower of his family estate, which he called his citadel, and almost totally isolated himself from society and even family. Drawing upon his library of 1,500 books, he devoted himself to his attempts to find wisdom and dignity and to put down what he found, so that it might be shared with others in due course; which it was – almost a decade later. While I did not quite enjoy a chateau; looking back over the decade in which my essay writing took place, I found certain surprising parallels between Montaigne’s experience and my own.

As I edited the essays, I also found myself appreciating anew Emerson’s serenity, his free personality and his catholicity of interests. Revising these essays for publication, I found the temperate and magnanimous spirit of Emerson a guide. His Essays are a model for this book, less in their style or content than in their spirit. If readers of my own essays come away from them with something of the free perspective and appreciation for the richness of the world that one imbibes from Emerson, then this book will have accomplished its purpose and justified its existence.

The West in a Nutshell is published by Barrallier Books. Visit their website for podcasts and videos of Paul Monk discussing his book.

Margaret Simons and an apparent hoax on Quadrant

Putin Should Have Brushed Up on His Clausewitz