This happened a bit over two weeks ago when it was revealed that the Rudd government’s promise of $672 million, set aside under the Strategic Indigenous Housing and Infrastructure Program to deliver 750 new houses for Aboriginal families in the Northern Territory, was in trouble.

It was later claimed that the $672 million would possible only deliver a bit over 300 new houses.

Then The Australian newspaper ran a story that the Rudd government was planning to introduce a Capital Gains Tax on houses worth more than – you guessed it – $2,000,000. But rest easy, after 15 months there hasn’t been a single indigenous house built in the Northern Territory.

It was about this time that a sudden turn of events caused a dash for The Australian newspaper, the turning up of the radio and eyes glued to the TV set. 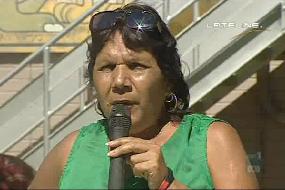 And it was all to do with a little known Minister for Indigenous Affairs, in the Northern Territory government, Alison Anderson.

Alison Anderson’s electrifying speech in the Northern Territory Parliament during a no-confidence motion in the Henderson government was, to put it mildly, sensational. She said:

I want to tell you what is wrong at the heart of the Labor government. It is not so much the weak ministers, the constant fighting or the worry about the interests of the party and its friends.

It is Labor’s problem with truth.

I always wanted to be straight with Territorians. But I was opposed in this at every turn by the political minders; shadow men who are the real masters of this government.

She went on to say:

If I wanted to tell Territorians anything, I had to struggle against an army of spin doctors.

I came to realise that the truth was what the government most feared. It feared telling the truth; about its finances, about its priorities, about its connections and even about its policies.

Alison Anderson’s battle within her ministry and indeed the NT government itself, centred on the complete failure of Strategic Indigenous Housing and Infrastructure Program, to build a single home. Anderson wasn’t whistle blowing, she was didgerioo blowing, and on a massive scale.

After four years in the system, I know that I was wrong. Labor lives on the Aboriginal vote, it talks constantly about Aboriginal people, but what it is really good at is spending Aboriginal money.

Anderson’s frustration with bureaucratic bungling and ineptitude is shared by thousands of Australian as they battle through various layers of regulations and by-laws, of planning and building permits that plague many local authorities. But in the $672 million indigenous housing project you would expect little bureaucratic red tape on native-title lands.

You would think that there would be fairly standard designs, little planning problems, sympathetic local government regulations — and a desire to build.

I want to tell you a little about the example in everyone’s thoughts today; the Strategic Indigenous Housing and Infrastructure Program [SIHIP].

SIHIP was designed as the great answer to the remote housing crisis that is crippling my people. It was the heart and core of the Commonwealth’s “emergency response”, after the Little Children are Sacred report was made public.  It was the big chance to change …

Alison Anderson went on to say:

Late last year I began to receive briefings about the program. I knew things were going wrong. I raised my concerns with my colleagues. I struggled to get action. I appealed to them. I could see the disaster in the making.

I could see the money being swallowed up; on consultation, on training costs, on administration. I was unsuccessful.

There was no urgency. They didn’t care.

At first a reader might think that Alison Anderson’s speech was another example of a politician with and axe to grind, but then you realise that this is a very brave woman, doing a very brave thing.

What I realised in the end was this; the real governing was being done by an inner group, a little secret club.

On the outside, you see ministers, departments. On the inside you see little groups of political advisors, plotting and planning.

You see consultants coming and going, you see jobs being handed out to political friends and allies. You see another world.

Thank you Alison Anderson for behaving like a responsible minister and a decent Member of Parliament. As for the Strategic Indigenous Housing and Infrastructure Project …

Welcome to the House that Kevin Built.