It’s disturbing how, after years of Orwellian lies, the radical environmentalist is portrayed as an objective scientist. “In some ways,” wrote Hugh Mackay in Reinventing Australia,

the green movement of the late Eighties stole the churches’ thunder by offering a new form of religion which seemed to be based on purely rational data and which promised its own version of ‘peace of earth’ in response to fear of a new unknown. Belief in the inherent goodness of Mother Earth (and even, as in some manifestations of environmentalism, belief in the planet as a vast organism) has led to belief in a series of environmental propositions which have the force of a fundamentalist faith.

For the aspiring green evangelist, there are many paths to nirvana, but only one way to recreate the Garden of Eden: “To environmental fundamentalists, plastic is an evil substance; developers are satanical; every tree is a good tree; rainforests are sacred sites; recycling is an inherently virtuous (rather than merely sensible) activity, and so on.” By their fruits ye shall know them: public-funded abortions (sacrifice), jihads against checkout bags (purity), stacked panels to prevent blasphemous debates (heresy guards), phony consensus arguments (groupthink).

The questioner, who throws off a green evangelist, must be excommunicated, or put in his or her place. Australia’s children are being taught that the green movement exists to protect us. As a popular textbook, Jacaranda Essentials History 2 by Maureen Anderson and Anne Low, explains to students: “‘Green politics’ is a term used to refer to issues that ‘Green’ parties throughout the world focus on: protecting the environment for future generations and supporting human rights and social justice.” 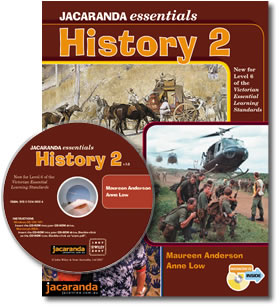 Two pages are devoted to Bob Brown and his brand of green politics … because?

Because their “parties believe in a democratic process that incorporates consultation with the public.”

Because they “take a non-violent stand in advocating their goals, and they promote respect for diversity: the idea that there is no ‘correct’ view against which to judge people’s behaviour and way of life.”

Because – states the children’s propaganda – Brown is a “respected figure in Australian politics for his commitment to and championing of environmental issues.” (Although voting patterns paint the opposite picture.)

Because Brown “put forward a bill leading to the end of mandatory detention of children for petty crimes in the Northern Territory”.

Because, “Although a small party, the Greens are committed to providing a viable alternative to Australia’s two main political parties.”

Yet, nothing beats An Inconvenient Truth, to scare Australia’s children. Al Gore’s discredited documentary is used as an educational tool – or a tool to cement the leftwing Labor Party’s religious ideas, and one former Vice President’s myths. Gore’s faith declares that “a new scientific study shows that, for the first time, polar bears have been drowning in significant numbers.” Is junior next?

Gore’s views appear mystical, especially when Denmark’s Bjorn Lomborg brings logic to the debate. In Cool It he writes:

The best-studied polar-bear population lives on the western coast of Hudson Bay. That its population has declined 17 percent, from 1,200 in 1987 to under 950 in 2004, has gotten much press. Not mentioned, though, is that since 1981 the population had soared from just 500, thus eradicating any claim of decline. Moreover, nowhere in the news coverage is it mentioned that 300 to 500 bears are shot each year, with 49 shot on average on the west coast of Hudson Bay.

One major reason to out children’s propaganda, of course, is to prevent students from seeing themselves as “polluters,” while encouraging them to use mathematics and history sources as intellectual safeguards against depression.

The story of Mother Earth’s penchant for European-style socialism is the cornerstone of the faith, so it makes sense that leftwing politicians are portrayed as blameless prophets. More troubling, however, is the fact that textbook publishers and television stations will hide chunks of climate history, in order to promote their supposedly ideological-free positions. Except that as Professor Ian Plimer points out in Heaven + Earth, “The Doomsday Book of England shows where grapes were grown, in places where no grapes could be cultivated for wine production. England, now a cool damp place, was warmer and drier in the Medieval Warming.”

In reality, not only did the earth experience many warming and cooling periods before the establishment of the Ford Motor Company, we can safely say that warm periods (in many cases) invite positive experiences (including fabulous suntans). “England thrived and its population grew from 1.4 million to 5.5 million. France’s population tripled to 18 million.” We can also point to other warming periods (when we reject irrational green superstitions): The Roman Warming (500 BC-535 AD), The Minoan Warming (3,500-3,200 bp), The Holocene Warming b (8,000-5,600 bp), The Holocene Warming a (11,600-8,500 bp).

Must we abandon recent history too? As a teenager in the 1990s, I recall reading many horrible green visions and believing in some of them, until, of course, my brain developed sharper critical-thinking skills. Now, I see the media for what it is, an arm of the Labor Party, and a free public relations branch for Green politicians. Maybe I’ve grown up.

I don’t wish to live in a groupthink-centric Australia where, as Hugh Mackay wrote,

Alternative positions are regarded as either malevolent or uniformed, and debates about the subtleties of the links between ecology and economics are swept aside in an evangelical frenzy.

Like so much simple certainty, the certainty of new converts to environmental fundamentalism is not always based on a full understanding of the issues: zeal is a sufficient boost to confidence, even in the absence of adequate knowledge.