Sex and the single footballer

When Australian Rules footballers invite a stripper to perform in the dressing room before a show, “it is absolutely, completely unacceptable and inappropriate and it sends all of the wrong messages.”

Name the source of that quote – was it:

If you guessed (d), award yourself a large plush stuffed animal of your choice. This, by the way, is the same John Brumby who said on 20 August 2007, in relation to Kevin Rudd’s little outing in New York, that “The last time I attended a strip place would have probably been in the 1970s, when I was a student, I think if my memory’s correct it was probably in Sydney.” 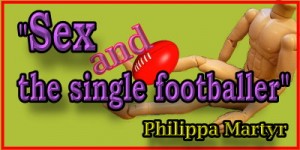 So if you are a football player, this behaviour is unacceptable. If you were a young gormless student in the free-love era then it’s probably OK, and if you are currently Prime Minister, it’s just a bloke’s night out.

Why do we have higher standards for our football players than for everyone else, including ourselves? It’s one of those irregular verbs: I am an ordinary decent bloke; you were drunk; he is a role model.

I notice Mr Brumby has not introduced legislation banning strippers and strip clubs from operating in his State.  And this is because we all know that it’s perfectly all right to go to a strip club, or to hire a stripper to do a show for you and your mates, if you’re an ugly tradesman in a flannelette shirt with nothing better to do on a Friday night.

Middle-class men who watch a few too many American TV dramas might absorb the idea that men-like-them go to strip clubs, but usually one visit to a real-life strip club is enough to cure them of that delusion. In short, the whole stripper demographic is located pretty firmly in the group which the chattering classes secretly look down on because they’re hopelessly low-rent. These are the good customers: the bread and butter of an entire sex industry built on the unutterable loneliness of the single man.

Strippers, hookers and group sex are actually very, very trashy. And no-one is saying any of this out loud, because it’s all a bit too scary in our so-called egalitarian culture.

This is why the Premier can say what he said, and see nothing amiss in it. We expect better of our sportsmen, because they are so well-paid. Our sports players are role models, and when they continue to wallow in working-class vulgarity, this is seen as insulting to the people who have made them rich men. We believe they should have climbed up the social ladder by now, and worked out that men with big incomes don’t need to do stuff like that any more.

It is, in short, “absolutely, completely unacceptable and inappropriate and it sends all of the wrong messages”.

The Positives of Negative Gearing

Time to Dismantle the Curtin Myth