Jobs: the glass is half empty

Australia’s labour force numbers are based on a household survey, subject to significant sampling error. It is about time the ABS starting sampling business and government establishments, as in the United States, to get more reliable employment numbers. But, however unreliable are the individual monthly gyrations, over a period reliable trends become evident. The latest September labour force numbers form part of a pattern pointing unambiguously to a weakening economy.

In fact, the parlous state of the economy has been evident for some time. It was certainly evident on 8 June and on 24 July, when Glenn Stevens made his rather pathetic attempts to ignore the many and well publicised job layoffs and convince us all that our economic glass was half full. Presumably those thrown out of work and/or unable to find work would have been unconvinced.

Perish the thought, but the view of the “independent” Reserve Bank seemed a little too close to the Government’s narrative for comfort. After all, when you are implementing a discriminatory tax on the mining industry (Australia’s remaining significant engine of growth) at a time when mineral prices are plunging and when you are also implementing a destructive carbon tax (severely undermining the international competitiveness of Australia’s manufacturing industry), the last thing you want to hear about is a weakening economy. Noblesse oblige, as it were, out steps the RBA’s Governor to lend struggling Wayne Swan a hand.

Politicisation of federal Treasury has already occurred. It would be a pity, to say the least, if the Reserve Bank also became a handmaiden of the most duplicitous and incompetent government in Australia’s history. The Governor’s speeches, together with his constructive ambiguity played out before the last election on whether stimulus spending was keeping interest rates up, are concerning.

Am I missing the mark? Maybe I am. But maybe I’m not. The Reserve Bank does not generally reduce interest rates when the economy is doing okay and the glass is half full. It has a recent record of increasing rates inappropriately rather than of reducing them.

Recall the three rate increases in November, 2007, and in February and March, 2008, when everybody, apparently except the Reserve Bank, knew that a financial crisis was brewing. The current phase of monetary easing began in November last year. When the Governor made his first “optimistic” speech in June, the cash rate had already been reduced in four stages by a total of 1.25 percentage points.

Clearly the economy was weakening significantly. Why else would the Reserve Bank have been cutting rates so deeply and so quickly? The labour market tells the story.

The September labour force numbers created some stir because they showed unemployment rising from 5.1 per cent to 5.4 per cent. This by itself is not too significant, particularly as the participation rate was reported to have risen from 65 to 65.2 per cent. A rise in participation of this magnitude, perverse in a weakening labour market as people usually give up looking for work, would account for most, if not all, of the rise in the unemployment rate.

Annual growth in total employment numbers began noticeably recovering from the effects of the GFC in early 2010. However, since late 2010 the trend has become as steeply negative as it was positive in the recovery period. Year-on-year monthly employment growth has averaged around only half of one per cent during the first nine months of 2012. If this were to continue for very much longer we would face a steep rise in unemployment. 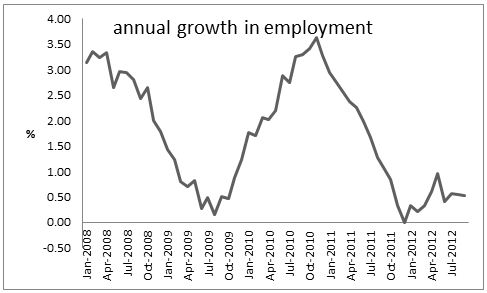 Now is not the time for Pollyannaish speeches about the economy; nor is it an opportune time to have new taxes hitting struggling industries; nor is it the least comforting to have an incompetent government and Prime Minister preoccupied with confecting ridiculous claims about misogyny. I mean, you could not make this all up.

Europe and the United States are in an economic mess. China is slowing down. Our economy is weakening significantly. The effects of the discriminatory and destructive taxes have still to be felt. And, our government is in the hands of Gillard and Swan, clinging desperately and shamelessly onto power for their own gratification — whatever the cost to the nation — by gift of Slipper, Thomson, Windsor, Oakeshott, and the Greens.

Never has so shifty a crew done so much for a perfidious few.

Labor must be thrashed, not merely beaten

Prints of The City and other royal pains