Blind to Opportunity as the Election Looms 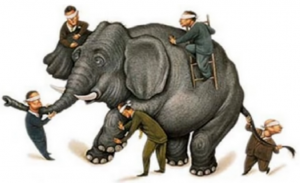 Permit me to offer some reflections on recent developments as the nation prepares to go to the polls.

Conservative commentators are salivating at the opportunity presented by Shorten’s pie-in-the-sky electric car initiative for the Coalition to strike back with a devastating critique that will reveal Shorten for the shameless, promise-anything huckster he really is.  On the face of it, you would think that the absurdity of this proposal should be enough to totally destroy Shorten’s credibility, particularly if coupled with pithy reminders of school halls and pink batts.

But I fear such expectations may be overly optimistic. I suspect that most voters will treat this announcement with a degree of cynicism, never really expecting a Labor government to rush out and start building charging stations.  They will see it, and if subject to any degree of scrutiny Shorten will paint it, as an ‘aspirational target’ – something Canberra will assist where possible as the technology and the EV market develops.  Voters might see it as a cynical ploy but it won’t change their votes, particularly if they are smart enough to grasp that it is just an election-mode sop to the Greens and never come to fruition.

Then again, with Labor, I’m prepared to be surprised. Like the misconceived birth of the NBN, you can never be entirely sure if a Cabinet eager to engrave its place in history won’t sign off some grandiose scheme, especially if The Greens need wooing for their Senate votes. Should that happen, a legion of rent-seekers will be lined up around the block, all with hands out to get a piece of the EV action.

I looked in vain for any mention of this issue in the SMH or the ABC’s online behemoth, wondering if  Shorten’s egregious gaffe about recharging an EV in under ten  minutes might rate critical comment. Nothing! No surprise there. Other than masochists paying to be whipped, beaten and humiliated, no relationship matches the Coalition’s funding of a media colossus that never misses a chance to give it a good thrashing.

What I did hear this morning, as the lead item in the ABC Illawarra news broadcast no less, is that a 4 Corners investigation is poised to reveal that a fund-raiser for Tony Abbott had been held at a particular function centre, one of whose directors has links to the Chinese Communist Party.  The same item made it very prominently onto the SMH website. That tells you all you need to know about why the former Fairfax rags are now a vestigal relic attached, at least for the moment, to a none-too-healthy broadcast network. As for the ABC, is any further confirmation needed of what happens when the Left is given a publicly funded cubbyhouse and megaphone to promote its unfettered pet hates and passions?

Yes, it’s worth the government banging the drum about Labor’s EV policy long and loud, but I doubt it will be any kind of a game-changer. And actually, given how reluctant is the Coalition to land a knockout blow whenever Shorten leads with his chin, I’d be surprised if they do much of anything to exploit the Labor leader’s latest gaffe. You can almost hear the cogs ticking over, slowly, in the Liberal party room: If we make too much of a fuss about electric vehicles and how impractical they are, why we’ll never win over a single Greens voter! Meanwhile, much of the traditional base looks elsewhere for candidates and parties prepared to restore sanity to the energy market and policies.

Perhaps that fear of offending green-tinted voters is why Environment Minister Melissa Price is refusing to sign off on the Adani mine, reportedly at the behest of wet Victorian Liberals. Unless Morrison overrules this mind-boggling reticence and instructs Price to sign the documents before the election is announced, he will have alienated even more of the Liberals’ conservative base.  As many commentators have observed, voters who are against Adani will never vote for the Coalition under any circumstance, not even if the government replaces the parliament’s opening prayer with a daily corroboree in Gaia’s honour.

Meanwhile, on another front, news has emerged that, so far, only one asylum seeker has been transferred to Australia under Labor’s medivac law. Back in December I wrote:

If I were Morrison I would be mobilizing my campaign team right now. In such circumstances it would be hard not to argue and portray border protection as the election’s central theme.  The government would be fighting on ground of its own choosing.

My hypothesis was that Morison should be ready to call an early election if the Labor/Greens opposition re-instituted this idea, which they did. For my money, Morrison should have seized the day and called an immediate election on this issue. As I noted:

Shorten has exposed his weakness on this front but the momentum won’t last.  Even if we see an increased number of transfers, it’s unlikely the ABC will immediately need to reactivate its log of leaky boat arrivals. People smugglers are morally wretched but not stupid. They’ll likely wait until Labor is installed before wishing a hearty ‘bon voyage’ to the first vessels of the reborn armada making for Christmas Island. The pause will permit Shorten to argue that the Medivac bill has not prompted the dire outcome predicted by the government. As a consequence and as an election issue, the Coalition will find border security a much harder issue from which to harvest votes…

… It’s a difficult call but, as a general rule, when your wave comes in you had better ride it.

As it turns out, border protection, the government’s greatest strength, is now a  minor issue as far as this election is concerned.  Shorten offered the government another huge target, as he did with his piffle about electric vehicles, but Team Morrison let it go through to the keeper.

Andrew Bolt recently opined that the danger of a Shorten government is too great for conservatives to entertain the notion of the Coalition needing to spend some time in the naughty corner, where it can do penance for its Turnbullian sins and contemplate the principles it so giddily shredded. But a future Labor government is a certainty in any case — if not in 2019 then three years down the road.

If Shorten loses the unloseable election will Labor revert to the pragmatic stance of the Hawke/Keating years, or will it double down on its current embrace of green-left lunacies?

Call me a pessimist if you will, but I’m betting on the latter.

The Damage and the Challenge from Within