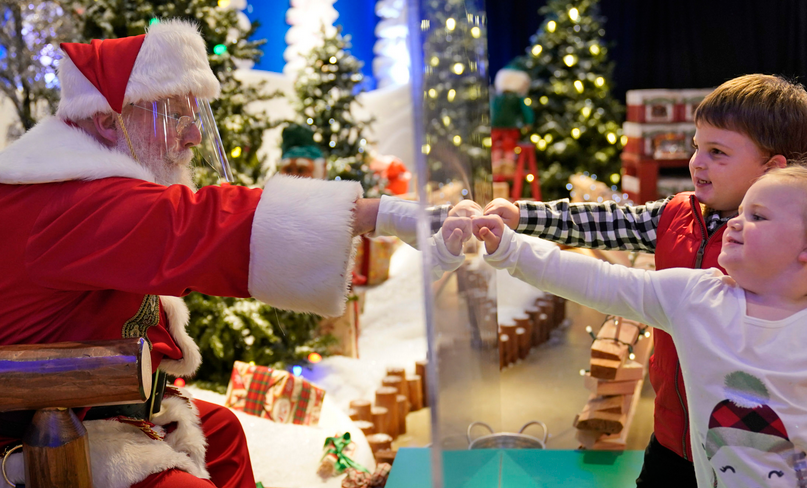 Mummy speaks: “Now come on children. Christmas is coming. We need to get this tree decorated and all the lights up so Father Christmas can find you.”

Children are shouting out excitedly,  rushing to the lounge room where Daddy has erected a small tree,  and is standing back admiring his handiwork.   “Hurray!” “Hurray!”     “Father Christmas is going to bring me a dolly, and another dolly.”    “I want a pony  …”   “Peter! You’re standing on my tinsel!”

Mummy:  “Now children play nicely  or Father Christmas won’t be bringing anything for anybody!  And don’t put all the decorations at the bottom!  Use that step ladder.  But be careful!”

The parents help the children to decorate the tree, all talking loudly and excitedly about what Father Christmas is going to bring them .  Discussing the usual Christmas rituals.   Carrots for the reindeer.  Biscuits in a saucer for Father Christmas.  All the usual problems that must be resolved each Christmas.

Mummy and Daddy slip back into the adjacent dining room.  Mummy is speaking to Daddy, quite softly and seriously so that the children can’t quite hear?

Mummy: “We really must get our vaccines done before Christmas.  The children just must be safe from COVID.  I’m really worried that we have left it so late.”

Back in the lounge the children are still decorating, still squealing with delight.  But is young Peter becoming just a little bit more introspective?  Suddenly he blurts out…

Young Peter:  “I don’t believe in Father Christmas.  It doesn’t make any sense.”

The Girls:  What!  (shock horror as they cry in unison)  “Of course there is a Father Christmas! Who else brings us presents!”

Peter:  Reindeers flying from the North Pole. Visiting every child on the planet in one night.  Fat Father Christmas climbing down the chimney —  and we don’t even have a chimney, we have a gas heater. It’s rubbish.  I think it’s just so shops can sell more stuff.”

Shrieks of horror!  The girls rush over to their parents in distress.

The Girls: Mummy! Mummy!  Peter says there is no Father Christmas.  “Tell him he’s a liar!!!”

Daddy:“How dare you frighten your sisters!  Of course there’s a Father Christmas. And he comes every year.  And (glaring daggers at Young Peter)  he doesn’t bring presents to naughty boys.   Go to your room immediately. I’ll be up to speak with you in moment!”

Mummy: Now now, girls.  Don’t you listen to Peter’s nonsense.  Go and finish that decorating or Father Christmas  WON’T  come, and that would be very unfortunate!

The girls, somewhat mollified, return to their task a little more subdued. Daddy speaks, returning to the subject of vaccines

Daddy: You know, I’ve been reading a bit about those vaccines.  I’m very worried.  It seems to me that you are just as much at risk of getting COVID or transmitting COVID even if you have the vaccine.  And then there’s the risks of the vaccine itself. I’m not sure I want the children to take those risks.

Mummy:  How can you say that!   It’s the only way to keep us all safe!   You’ve seen the TV!  The government! The doctors!  Even the TV stars all believe it’s the best option to keep everyone safe! I mean, you don’t trust Magda Szubanski?

Daddy:  Hmmm ….  All their advice would be a little more credible if they didn’t change it all the time. Masks on, masks off, don’t go near swings and slides in the park until, suddenly, there’s no threat. Or what about virus-carrying pizza boxes and contagious footballs

Mummy:   I’ll have you know that, because South Australia’s chief health officer issued that warning, not a single person has been carried off by a pizza box or a Sherrin. I don’t want to hear any more of this nonsense. Go and deal with Peter.”

Peter is lying on his bed, a look of defiance in his eyes.

Daddy: What’s all this nonsense about no Father Christmas.”

Peter:  I saw the presents in the bottom of the wardrobe.

Back in the dining room.  Daddy has returned and speaks with Mummy.

Daddy:  I just don’t think getting the kids shot up with this gene-therapy jab is a good idea. I’ve seen the statistics.  The Israel data …    They are not good. Maybe we just have to grow up and realise that the vaccines don’t work. … ”

Even if the vaccine doesn’t stop you catching it or spreading it, we have to think about the safety of the whole community! ”

Young Peter is seeing a department store SANTA with his sisters. Breaking with tradition, Santa is masked and seated behind a perspex screen. After touching fists against the barrier, he effects a look of absolute innocence as he asks for the presents he already knows are cached in the bottom of his parent’s wardrobe.

Santa: Have you been a good boy this year?

Young Peter: Oh! Yes!  I have learnt a very important lesson from Dad about telling the truth.

Santa: Dear boy, what lesson is that?

Young Peter: That something can be true even if it’s not just so long as everyone else agrees to say they believe it too.

As the stage lights fade Mummy and Daddy are seen leading their brood to Jabs-R-Us for whole-family inoculations.

Mummy: Come on, hurry up. We wouldn’t want to disappoint Magda.