When the Best Prescription is a Stiff Drink 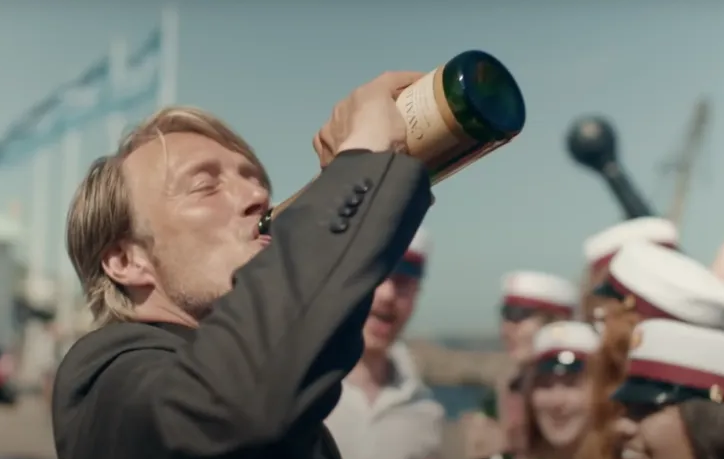 The award-winning Danish movie Another Round, directed by Thomas Vinterberg, tells the story of four middle-aged men bored with their lives who decide to explore the theory that the human body is deficient in alcohol. The Danish title, Druk, translates simply as ‘drunk’, but the English title points to the possibility this movie has more to it than drinking, although there is plenty of that. And – spoiler alert – what follows outlines the overall plot but avoids giving away specific events and scenes.

The men, Martin, Peter, Tommy, and Nikolaj, are all teachers at a Danish high school, and all suffer the crisis of meaningless for today’s middle-aged men. The lead character, Martin, teaches history and is exceptionally well played by Mads Mikkelsen (above), best known for his 2006 Casino Royale role as Le Cheffre, whose eye weeps blood playing poker against Daniel Craig’s James Bond. Martin and Peter are married to attractive wives and have children. They live in comfortable homes with simple but stylish Danish interiors and have no obvious money problems. But their students ignore them in the classroom, obsessed with their phones. Their own children are indifferent and ungrateful. Their wives, preoccupied with jobs and children, have little time for their husbands and little conversation beyond assigning them chores. These men’s lives are devoid of appreciation. They’ve become zombies in their classrooms and at home, their comfortable existence exposed as wastelands of nothingness. Mikkelsen’s looks to camera, to Martin’s distracted students, to his garden beyond the window, to his children on the couch hypnotised by electronic media, and to his wife leaving for work, lay bare his internal desolation.

After a meeting with his students and their worried parents, a reflective Martin asks his wife if he’s become boring. He then joins the other three men for a boozy dinner to celebrate Nikolaj’s fortieth birthday. They’ve been long-time friends and there is none of the superficial or ego-driven conversation that often dominates male camaraderie. These men know how to talk to each other about their inner selves. Peter introduces the idea, attributed to psychiatrist Finn Skårderud, that the human body is alcohol-deficient and does better at a blood alcohol level of 0.05 per cent. They agree to give the experiment a try and to write a journal to record their experiences. The agreement is to drink only during the day, at work, and not after 8pm, citing the example of Hemmingway, who is said to have followed that rule so as to be able to write in the mornings.

Martin is re-animated in the classroom, his lessons transformed. He also gets his mojo back at home. The other teachers’ lessons also benefit. Despite a minor crisis at the school highlighting the risk of exposure, the men agree to up the dose and explore 0.1 per cent. This results in more obvious signs of intoxication, the convincing performances are made more tangible by the use of an unsteady camera. The tension rises.

The men discuss exploring the extremes by going for maximum alcohol. The four have an out-of-control night full of boozy excitement and youthful antics, which ends disgracefully. The resulting crises for the men at home and a the school are predictable and tragic but explored with great sympathy to plausible resolutions. Mikkelsen is outstanding as he contends with loss and grief while maintaining his friendship and teaching responsibilities. The poster for the film – Mikkelsen joyously swigging from a champagne bottle – is from the finale, which sees the students, celebrating in the street after their examinations, joined by the men, who connect with them drinking and dancing, newly awakened to life.

But Another Round is much more than a drinking movie. It brilliantly exposes the emptiness for men of contemporary middle-class life, marriage, and fatherhood, their invisibility. And it sympathetically reveals the sustained caring, trust and friendship these men have for each other, which has become the only thing that makes their lives worth living. A mutual, conscious, and reflective use of alcohol is the means they use to re-awaken their long-lost joie de vivre, but it also brings them to cathartic crises. Martin in particular uses booze like a healing drug to reconnect with his alienated male spirit energy, transforming himself from the unappreciated zombie he’d become to the passionate, lively man his wife, children, friends, and students want him to be.

When the Best Prescription is a Stiff Drink