Just Announced: Winner of the prestigious State Premier’s Blak Book Award for 2009 is Heimat: A Book About Me (Moonday Books) by Petunia Mayhem. Dr Mayhem, who identifies herself as a proud woman of the Bounga Arrawonga nation of White Aborigines, is a senior lecturer in the Department of History, Classics and Accounting at Great Southern University, Northcote Campus.

Dr Mayhem’s previous highly acclaimed and multiple prize winning work, now in its fourth printing, is Black Monologues My Mother Never Taught Me (Moonday Books, 2004). Dr Mayhem’s mother, who always thought she was Lutheran, died before her daughter’s outstanding research proving they were really Aboriginal was revealed. Because of this Dr Mayhem never received from her mother’s lips the secret Black women’s business that should have been her birthright. 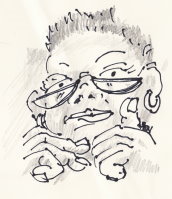 In this passionate memoir, which surmounts personal loss and deprivation, Dr Mayhem tells the stories her mother never told her. Winner of the Black Nation Pen Book Award in 2005. An HSC, VCE set text for English, History, Mathematics, Climate Change, and Black Studies.

Heimat, or "homeland" in the revitalised and renovated Bounga Arrawonga language, is a story of sadness, racism, sexism, office sharing, dispossession and badly cooked food set in a nameless  modern day university. In it Dr Mayhem traces the sorrows, hardships and anguish of a contemporary White Aboriginal encountering misogyny, racism and a chronic eating disorder. Bipolar fluctuations and digestive disorders are never far from the surface in Dr Mayhem’s tragic but ultimately empowering story of a Black woman who is often mistaken for white, and of her uplifting and ultimately successful struggle to be recognised as a victim of ongoing  colonialism and oppression.

“The story of Dr Mayhem’s everyday encounters with passive racism in her daily tram trips to and from University were among the most moving accounts of loneliness and despair I have ever read,” Sara Dane, The Age.

“Petunia’s fights in the canteen for the banning of deep fried foods and her inner strength when she faced the united cholera of her obese male colleagues ranked, for me, with books by Primo Levi that I’ve heard of,” Dominica Fungus, The Book Show.

“Brings to bare a creative and brilliant gaze upon the state of the White Aboriginal in modern Australia. An epoch marking achievement. Heimat ranks with Black Roots, White Tips by Indigenous writer Candy Braun,” Bernard Black, Indigenous author and mentor.

The author is unfortunately unavailable for media interviews as she is presently flying to Germany for a one day seminar on “Genocide Today: Climate Change and the POMO Right” at the Free University, Berlin.

Moonday Books – prize winning books with not too many words.