An Enemy Almost Tougher Than the Vietcong 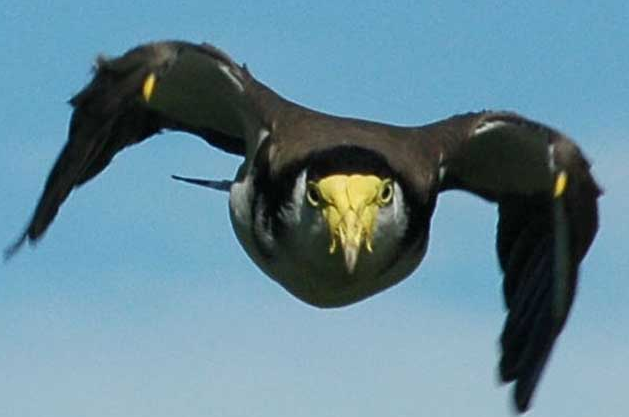 Once upon a time there were two plovers, a mother plover and a father plover. Each year the pair hatched two eggs and raised their young in an enchanted place called Queensland. The spot they chose for this was always a bare patch of lawn at the bottom corner of an army parade ground. One year this led to a memorable stand-off.

At the very same time, in the same enchanting land, the soldiers of an infantry battalion dwelt in the nearbybarracks. These were the men of the Ninth Battalion, Royal Australian Regiment.  In 1971, we in the battalion were preparing for the unit’s second tour of duty in South Vietnam, and so we spent more time in the bush than on the parade ground. There was one exception. In the middle of it all, we were to receive our ceremonial Colours and this involved a complicated parade and many days of drill rehearsals. The Governor-General was going to be there.

On the morning we assembled for the first rehearsal, the plovers sat quietly near the bottom corner of the parade ground, nervously watching. Apprehensive.

The first part of the rehearsal went well. Then came the part where, in order to carry out a traditional manoeuvre, each sub-unit had to march close to the plovers’ corner of the drill square. As the first troops neared the bare patch of lawn, mother and father plover began shrieking with annoyance. They were both on their feet, looking hostile. Then the take-off and attack.  Beaks, claws, swooping, screeching.

With the first direct swoop against them, half the soldiers in the first company scattered shamefully. The other half had not yet reached the imaginary line that marked the plovers’ territory and, with stern ceremony, slow-marched towards the invisible point of no return. All the while the band played stirring military music while rank after rank of Aussie infantry reached the line and came under intense air attack. It was chaos, a shambles.

One brave sergeant, a veteran of an earlier deployment to the war zone, stood his ground while loudly ordering , ‘Stand Fast! Stand Fast!’ He was furious at the ill-discipline on display. The plovers spotted him and attacked again, whereupon he lost his nerve and tried to take cover, crouching low with rifle in one hand and waving frantically above his head with the other.

The music fizzled out and was replaced with the sound of mirthful but subdued laughter from the bandsmen over in that direction.

I watched from a distance. ‘Sher-yiiiitt!’ I thought, deeply worried by a sudden realisation. ‘If this is how we go against a couple of plovers, how will we go against the guys in dug in bunkers in the jungle with assault rifles, heavy machine guns, grenade launchers and prepared fields of fire?’

Next day, by a process of trial and error, an unseen line – a kind of demilitarised zone – was discovered running across the corner of the parade ground. It was found that the soldiers could march almost to this line while just remaining outside the plovers’ territory. This became the new route. Lots of squawks and shrieks. No attacks.

Despite the success of this new route, a nagging doubt persisted. With all the extra spectators on the big day, Mr. and Mrs. Plover might just lose it, become unhinged and act irrationally. They might just attack the whole battalion no matter what. Best to have a conference.

A bright young officer suggested sedating the plovers for a few hours. How this was to be done, he could not explain. Good suggestion though!

Someone else suggested a spring-loaded bird net like the ones you see in African nature documentaries and safari movies, this would capture the plovers if they became agitated. Discussion followed. The commanding officer voiced his concern that this netting might also snare small children at play a short distance from their parents in the spectator seats. This idea was shelved.

Then there was the suggestion that a marksman stand-by and shoot the plovers at the first sign of take-off. Always reluctant to stifle the creativity of his officers, the CO held that this was not necessarily a bad suggestion. He cautioned, however, that the risk of collateral damage to spectators was rather high. The words ‘marksman’ and ‘shoot’ were very sensibly erased from the whiteboard.

After canvassing all options, the CO decided to leave it in the lap of the gods and hope the soldiers would stand up to the challenge if the plovers were having a bad day.

In the end all went well. The plovers followed the rules of engagement, the battalion got its Colours, the Governor-General had an outing, the CO impressed his higher-ups, the soldiers saw themselves on television and the spectators clapped and cheered. We young officers were told we were made of the right stuff. That night in the gymnasium, the whole battalion had a Regimental Ball, a spectacular – though increasingly drunken and unruly – event.

Peace and quiet was restored to the plover family because, within a few days, the battalion was back in the bush. We resumed the grim work of practising how to attack complex bunker systems deep in the jungle. Plover versus Infantry Battalion had been a close-run thing but when the stand-off was over, we all lived happily ever after.

Postscript: As things turned out, the battalion’s second deployment, due for 1972, did not take place because the size of our combat force in South Vietnam was reduced to two battalions early that year. It was then drawn down fully in mid 1972. As for the author, his time in 9RAR was a one-year, but memorable, episode in his short and inglorious military career.

An Enemy Almost Tougher Than the Vietcong