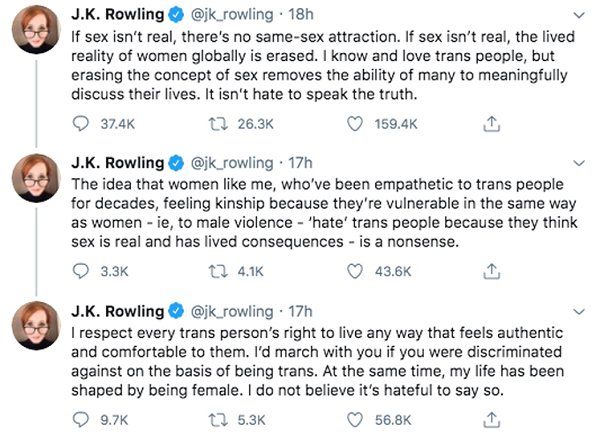 Amazon-owned Goodreads, a user-generated book review website, claims to be the world’s largest site for readers and book recommendations.  Goodreads’ terms of use prohibit user content that is threatening or defamatory, while its community guidelines state:

Hate speech, bigotry, threats, and ad hominem attacks are not tolerated. Criticizing the opinions of others is permitted, but attacking individuals for their opinions is not

Artificially inflating or deflating a book’s ratings or reputation violates our rules.

Despite those rules, Goodreads hosts an abundance of unfavourable reviews by users who openly state they have not read the work in question but seek to punish the views of the author, ergo artificially deflating a book’s rating or reputation.  No prizes for guessing that such reviews have been directed of late at J.K. Rowling (also writing as ‘Robert Galbraith’) and John Boyne, who have both attracted the ire of ideologues. The comment below is typical, as are the others embedded below:

Ms Rowling’s perceived transgressions are by now well known: stating her belief that your sex is determined at birth, asserting the right to her own experiences and expressing concern for medically transitioning young people who identify as trans when they may not actually be trans.  That she disclosed herself to be a survivor of domestic and sexual violence did not save Rowling from threats by the very people who claim to be jeopardised by her opinions.  Neither did it save John Boyne, whose alleged crime was using a transgender character’s natal gender in the title of his novel, My Brother’s Name is Jessica.  That Boyne, a gay man who grew up in Ireland during a time when his sexuality was illegal, expressed his support for the trans community didn’t save him either, particularly after he dared to declare that he was not a cis man, but a man, a sin.  He quit Twitter after receiving a warning against going out alone.  The fun continues on Goodreads, where Boyne is variously called a “transphobe“, a “T.E.R.F.” (trans exclusionary radical feminist), “a garbage writer“, “violently transphobic“, and “a bigoted old man“.  Nothing ad hominen in any of that.  From Goodreads:

Goodreads has a “flagging” system, where Goodreads members can flag any content that might violate our Community Guidelines.  Our team carefully reviews flagged items on a case-by-case basis, and we take action on any items that violate our policies.

Boyne escapes lightly in comparison to Rowling, for whom the mob reserves a special e-boot.  In addition to unfavourable reviews proudly penned by those who haven’t read the work

Do I feel bad about leaving a one star review on a book I haven’t read?  Nah! / I haven’t read it.  I just wanted to give J.K. Rowling and her transphobic clownery the lowest possible rating / I don’t normally rate books I haven’t read, but for J.K. Rowling I’ll make an exception! / Excited for people to say I’m cyberbullying one of the richest women in the world

Rowling is called “a Karen” (sigh), “privileged” (of course), “transphobic“ (naturally), “a sentient bag of garbage“ (problematic, but hand me a drink and I’ll think about it) commanded to “rot in hell“,  whose readers can “go choke“.  She is blamed for the high incidence of transsexual suicide, as per “Her declarations feed the stereotypes that negatively affect trans people, making suicide rates higher and their lives miserable.”  She is called the “Queen of f*****g TERFdom“ (nix the ice and leave the bottle, thanks) and a “bitch with a clear agenda, human trash, a fantastically transphobic, bigoted author” (credit for the ‘fantastically‘), consigned to the “asshole authors shelf”.  “F*** J.K. Rowling” (recurring), plus this, “F*** her editors and the publisher for this book” because “all trans women are men in dresses to her“.  Wow!  Nothing threatening or ad hominen in any of that.  All of this from the first two pages of Troubled Blood reviews.

There are the standard references to the breadth of Rowling’s platform and its implied, near magical influence, as well as allusions to her wealth which strive, but do not succeed, in being sinister.  That Rowling is a noted philanthropist who has donated tens of millions of dollars to charity and a writer credited with bringing a generation back to reading, who, along with that gentle soul John Boyne, has brought joy to legions, is not to be countenanced.

In Australia, companies and individuals can receive hefty fines for engaging in false reviews.  In the US, the Federal Trade Commission has prosecuted a company for leaving fake reviews on Amazon.  Yelp reviewers have been sued and Google forced to reveal names of reviewers, also subsequently sued.  The South Australian Supreme Court has held Google responsible for linking to defamatory websites.  Whether or not these Goodreads reviews may be deemed defamatory, it remains that they violate Goodreads’ terms of use and community guidelines.

My own reasons for not engaging in social media are manifold – chief among them, it doesn’t interest me and I don’t want to.  Publishers have largely shifted the burden of promotion to writers, who are expected to have, or build, a social media presence.  Submitting writers are prompted to provide their account details more often than not (sometimes a compulsory field on web forms).  If successful, social media participation is usually a contractual obligation.  Since the Harvey Weinstein scandal, publishing contracts also include broad morality clauses, allowing publishers to cancel contracts if a writer’s reputation “changes substantially.”  In the current illiberal climate, merely acknowledging the existence of science or psychology – disciplines which discommode ideologues  – is sufficient to change one’s reputation substantially.  HarperCollins sacked children’s author children’s author Gillian Phillip for expressing her support of J.K. Rowling.  Bestseller Rowling isn’t as easy to throw under the bus as director Woody Allen, who, at the behest of displeased staff, had his publishing contract cancelled despite not being charged much less convicted of any crime.

That publishing is a business is an oft-repeated saying which writers quickly learn to hate.  The question is, how much business is publishing prepared to lose?  In between the extremists there is a great swathe of  humanity which finds their tolerance undermined nearly every day — those of us who don’t engage in ‘cancelling’ or no-platforming but who quietly lose interest in those who do.

In her first job, Susan Bennett sold large knives, replica pistols and handcuffs to complete strangers.  Many years later, it occurred to her that some of those nice strangers may not have been purchasing those items for joke gifts, as they claimed.  Maybe they weren’t even nice.

4 thoughts on “Bookworms and Blowhards”