The Thoughts of Chairman Milne

On Wednesday, Prime Minister Malcolm “Friend of the ABC” Turnbull‘s business associate and Ozemail old mate Justin Milne, recently appointed to the chairmanship of the ABC, doubled down on his earlier comments that the national broadcaster is as fair as fair can be. Addressing a KPMG conference, he began with the thoughts below — thoughts so at odds with demonstrable fact the great wonderment is that uttered them with a straight face.

The address, which can be read in full here, will be fact-checked at Quadrant Online over the days to come. Mr Milne’s words are in italics, the commentary on his torrent of tendentious dribble in bold, the more asinine of his remarks underlined.

…The role of public service broadcasting and its future have always aroused great passion among Australians: a passion which, in itself, is evidence that democratic debate is alive and well.

The passion amongst those on the left has never been for “debate” (other than the Q&A stage-managed and stacked variety) but to possess and control its own brand-name media outlet, and that has been the case since the Thirties when public broadcasting began. John Curtin, for example, actually advocated that all media be government-run. Repeat, all. 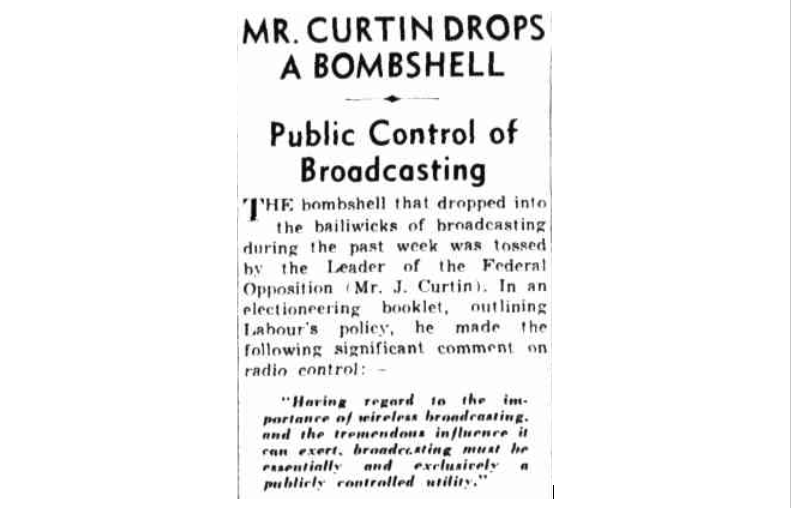 In case the reproduction above is a challenge, “broadcasting must be essentially and exclusively a publicly controlled utility”.

Each of us has ideas about how the ABC could be improved – from politicians to their constituents, from police officers to journalists, from your cousin to my sister. We are all engaged in the debate because we know that our taxes keep the ABC in business, so it’s no surprise that so many Australians offer opinions, both brickbats and bouquets.

Let me assure you, by the way, that those brickbats are taken seriously …

No they’re not. Indeed, they are treated with contempt, as Quadrant contributor Geoffrey Luck learned when he complained about a typical green-slanted report on renewables in Britain and was told by the ABC’s complaints lady that his “tone” was unacceptable and, therefore, his note of protest about inaccuracy and omission would not even be considered.

Protecting its own is something of a habit with the ABC. When viewers complained about chief political correspondent Andrew Probyn doing some on-air editorialising about the “destructive” Tony Abbott, the ABC said there was no case to answer. ACMA begged to differ.

… because we can and do make mistakes …

And those mistakes are beauts:

At this moment, for example, there are more than 60 ABC microphones open all around the country. Four television networks and 10 radio networks are broadcasting 24/7. And online articles are published every minute or so. Given that volume, unsurprisingly we are sometimes wrong, and some of those brickbats turn out to be well-founded complaints.

Those resources make the ABC by far the largest media organisation in the country, both in terms of reach and employment. The ABC Charter lays out certain obligations. Being the biggest fish in the pond isn’t one of them.

Irrespective of that, I can assure you that our 4,000 people are dedicated to telling the truth and providing accurate and impartial content. And for the vast majority of the time they are spectacularly successful.

Again, see the corrections and apologies page. Of the latter a sample of recent un-truths

ABC News: On 31 August 2017, ABC News published a story reporting an interview with former Liberal prime minister John Howard on the same-sex marriage survey.  The report stated that Mr Howard said the Government needed to consider protections outside of the ceremony – such as whether religious schools would be allowed to ban enrolments of children of married same-sex couples.  This was incorrect and has been removed from the story.

7.30 and News Digital: On 18 July, ABC News Digital reported that the Catholic Archdiocese of Brisbane did not respond to requests for comment; this story was corrected and their efforts to address domestic violence are reported in a further article: Australian church leaders call for urgent response to domestic violence. On 19 July, 7.30 broadcast a story on the treatment of women victims of domestic violence by some Christian Churches. The introduction to this story has been edited to remove a reference to research on the prevalence of domestic violence among evangelical Christian men, which was presented out of context. On 22 July, News Digital published an article on the response of Churches to these allegations. A quotation of a spokesman for the Anglican Church Southern Queensland was removed. Its use in the story mistakenly gave the impression that the spokesperson questioned that ABC News had found some churches are failing to sufficiently address domestic violence.

ABC News: On 31 January 2018, ABC NEWS reported on a document prepared in April 2009 for the Strategic Priorities and Budget Committee (SPBC) warning of critical risks in the roll-out of the Energy Efficient Homes Package.

In reporting on that document, the ABC did not intend to suggest that Mr Rudd recklessly ignored critical risks of the home insulation scheme before the deaths of four young installers or that he lied to the Royal Commission that examined those deaths.

The ABC accepts that, as found by the Royal Commission, Mr Rudd was not warned of, and was not aware of critical safety risks at the time.

The Royal Commission made no adverse findings against Mr Rudd and there is no suggestion that Mr Rudd lied to the Commission.

The ABC unreservedly apologises to Mr Rudd for any harm or embarrassment caused.

And the most recent addition to the ABC’s shrine to its own incompetence, this howler:

AM & PM: On 27 March 2018 AM and PM reported incorrectly stated that all Russian diplomats expelled from embassies around the world in response to the nerve agent gas attack in Britain were “spies”.

The ABC’s compendium of corrections and apologies, many of them going the full grovel, runs to some 250 entries and stretches back to March, 2014, when the webpage was launched. This, by Chairman Milne’s reckoning, makes the ABC “spectacularly successful” at getting it right.

Spectacular, yes. Right? Not to the extent and standards a decent editor, or chairman for that matter, would deem remotely acceptable.

Stay tuned. More to come over the days ahead.

this is a test