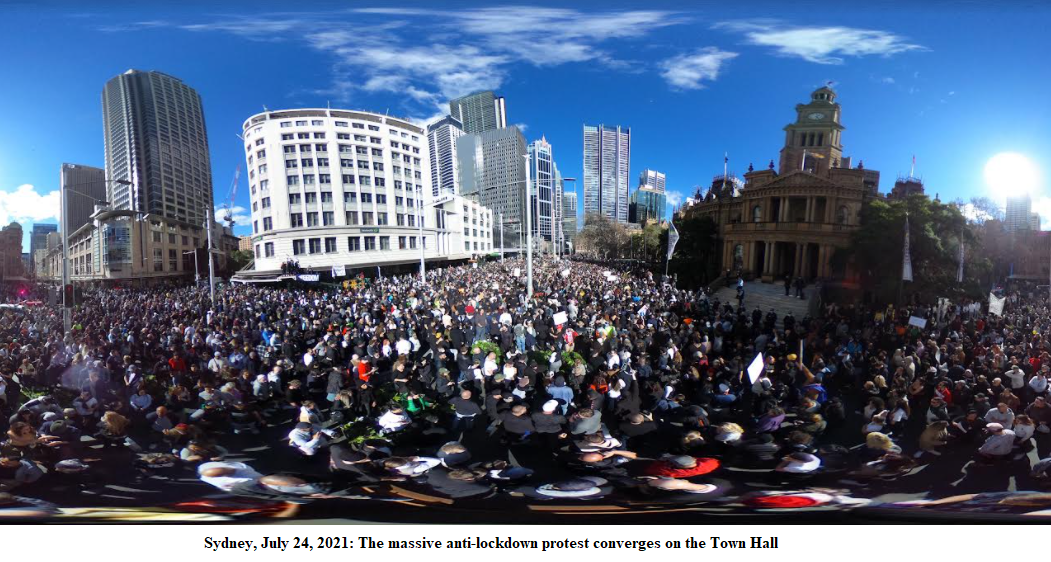 I’m a 27-year-old artist, teacher and cyber security student. I’m married to an occupational therapist who looked after COVID-19-infected patients in aged care at the height of Melbourne’s second lockdown. We are three-quarters vaccinated with Pfizer (I’m waiting on my second dose).

I experienced hope and even joy that so many people were prepared to risk fines and arrest to protest the lockdowns that have been crippling Australia since March last year. I decided to join them. Not in the city – that’s a too easy target, and too easily misrepresented, by the media or the Twitter brigade. Instead I walked up my local shopping strip with a sign, wearing a mask, encouraging people to ‘stay safe’ wherever they are (as the Victorian Government’s propaganda never fails to remind us). My sign read:

‘COVID can’t be eliminated. Put a ring of steel around our Premiers.’

I meant every word.

For my sin of questioning a doomed and destructive policy, I have the privilege of sharing the status of the “selfish boofheads”’ and “ratbags” who congregated, some with their children, in our two major CBDs. A panoply of dictocrats predictably pronounced their verdict on us that evening. In an exasperated tweet His Highness, Chief Medical Officer Brett Sutton, tried to argue that we don’t care about freedom if we oppose his elimination strategy. Mr Foley went further, effectively saying that we are “not on the side of humanity” for daring to challenge their edicts.

Well, I’m not convinced. You see, Brett Sutton could, under Victoria’s State of Emergency powers, ‘proportionately’ confiscate my possessions and require me to vacate my house. If I owned my house, he could order its demolition. These powers allowed him to cross the NSW-VIC border recently for a conference whose highlight appears to have been some dinner where awards were handed out. The reality is, Australia’s health officials and their lapdog premiers (or is it the other way around?) enjoy freedoms that our population does not. Why should we be lectured by them on freedom?

Here’s a thought: COVID can crush your body, but it cannot crush your spirit. And another thought: our premiers cannot eliminate COVID-19, but they can eliminate society in the trying. They might even succeed in doing just that before the next election. This is why I feel a great urgency to use whatever few means left to us as citizens to oppose their vision for life under COVID. They , not me and the thousands of others who took to the streets yesterday in state capitals, are the true enemies of the state, enemies of the community, enemies of individuals. They want to protect us from a disease that is out of their control, peddling lies and doling out shame while refusing point blank to release the “expert advice” that tells them their strategy is “working”. They have not sought the consent of the people whose rights they have been entrusted with.

For over a year I have tried to oppose this regime within the restrictions imposed on me with precious little success. The social contract is now rigged against common people. I look ahead and see a horizon of lockdowns, impositions and risk-avoidance that no vaccination level can cure. This horizon is bleakness incarnate. As if five lockdowns totalling some six months of domestic incarceration haven’t been bleak enough! If our premiers trash democratic norms to get their way and impose their will, they should expect fierce resistance. What they got on Saturday was only a taste.

A Timely Reminder of Liberty’s Roots

Emergency Powers and the Rule of Law