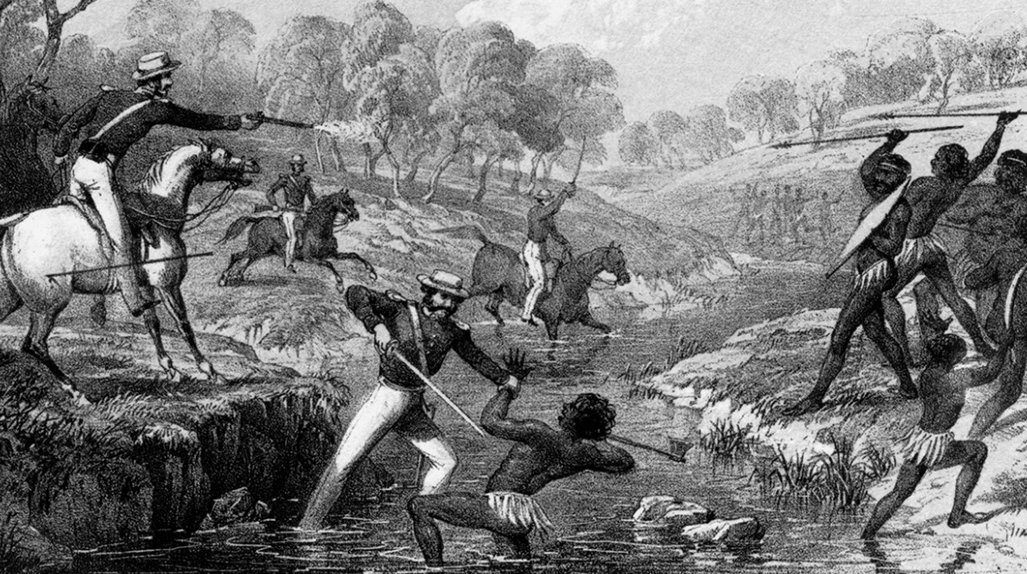 The term ‘history wars’ is an artificial construct designed by what historian Dr Michael Connor refers to as ‘the old historians’, or the history establishment, to demean any attempt by those who refuse to toe to the party line. Increasingly that party line holds Australia to be a racist country founded on the genocide and dispossession of Aboriginal people. One of its most high-profile defenders is Professor Lyndall Ryan who maintains, online at the University of Newcastle, what she terms a colonial Massacre Map.

One of its entries describes a massacre that purportedly took place at Risdon Cove, near Hobart, on May 3, 1804, at which an estimated 30 to 50 Aborigines, men and women, were killed in an unprovoked attack that set the scene for the genocide that was to follow and to characterise the colonist’s relations with the Aboriginal people for the next hundred or more years.  This incident was highlighted in a front-page article in The Wall Street Journal, written by an Australian-American, on August 21, 2000, by way of introducing Journal readers to the upcoming 2000 Olympics.

There was an affray between settlers and Aborigines on that day that was reported by the local commander, Lt Moore, to Lt Governor Collins on the very same day. But what we now ‘know’ about the Risdon Cove massacre – in particular the cause and the extent of casualties – is based on the testimony of an eye-witness, one Edward White, to a colonial government committee in 1830.

But was his testimony true?

Historian Keith Windschuttle throws doubt on it in his book The Fabrication of Aboriginal History, Vol 1.

However, in a fascinating new book, Truth Telling at Risdon Cove, authors Scott Seymour, George Brown and Roger Karge go further.  They provide convincing evidence that Edward White could not have been at Risdon Cove on the date in question and that therefore his testimony was false.  Or, at the very least, it was based on hearsay from some unidentified person, 26 years after the event.

The research methodology employed by the authors is most thorough and is easily understood by the layman, at whom this book seems principally directed.  Although having said that, and I speak with due humility as a layman myself, I doubt that any professional historian could legitimately find fault with the authors’ rigour and objectivity.  They cannot, and should not, dismiss it as a mere polemic written by unqualified amateurs.

The Edward White, that the old historians cite, is said to have arrived in Sydney, in July 1802, on the convict transport Atlas and was then transferred to Van Diemen’s Land, where he worked as a convict servant to one of the settlers.  The authors demonstrate, through meticulous research, that the Edward White who embarked on Atlas in 1801 could not have been at Risdon Cove in 1804 because he never arrived in Sydney.  He either died en route or was one of three who absconded in Rio de Janeiro.

They then painstakingly identify the real Edward White who testified in 1830, and prove that he did not arrive in the colony until 1806.

Without the testimony of Edward White, the incident at Risdon Cove is reduced to the small affray reported by Lt Moore.  An affray provoked by apparent hostility on the part of the Aborigines and which resulted in the death of a handful of them.  That this was a tragedy goes without saying but, in the context of the times, cannot, by any stretch of the imagination be described as ‘the opening shot in a war that would result in the near extermination of Tasmanian Aborigines’, as it was in the Wall Street Journal article.

Having disposed of Edward White’s testimony, the authors then turn their attention to the political dimension of this obsession of the old historians with genocide.  ‘Why do intellectuals like genocide?’, the authors ask.

Truth Telling at Risdon Cove is a beautifully produced coffee-table style book, enhanced by many illustrations, including extracts from critical primary sources accompanied, in most cases, by easy-to-read transcripts. It is fully supported by extensive footnotes, bibliography and index.  It is in fact a work of scholarship, albeit one that is easily digestible by the most untutored reader.

This book is important beyond the imperative to correct one false narrative. George Orwell was wrong only in his timing — 1984 came and went with barely a whimper, but in 2022 the rewriting of history is well entrenched in all our institutions.  Dr Michael Connor – who has also confronted major defects in the scholarship of many of the old historians pushing the genocide line – notes that much of what passes for history in recent publications is not based on primary sources but on the interpretations of those who have gone before them.  They simply accept, at face value, what has already been claimed as fact by someone else.  But his own research has shown, as just one example, that the much-touted Convincing Ground Massacre in Victoria has been greatly exaggerated.

But it is not just misinterpretation or exaggeration of primary sources that is at issue.  Old historians are not above inventing their own facts.  Seymour, Brown and Karge have uncovered one such example of an apparent invention on the part of one eminent historian whose 2003 work is regarded as the ‘go to’ reference for the Risdon Cove narrative.   That historian has failed to respond to invitations to explain this anomaly.

If this decline in academic standards is to be rectified, it will happen one battle at a time and will not be achieved by scholarly articles in conservative publications.  It will only happen when the broader public is made aware of our real history. Books such as Truth Telling at Risdon Cove will be an important part of this process.

I thoroughly recommend this book which is published by Risdon Cove Publishing and is available at all good bookshops or on-line at www.hidden-histories-tas.org for $44.95.

The boy “stolen” from an ants’ nest