The central point in the debate over the Stolen Generations is the accusation that children were forcibly removed from indigenous Australians as young as possible for the immediate purpose of raising them separately from and ignorant of their culture and people, and for the ultimate purposes of suppressing any distinct Aboriginal culture. The purported aim was to end the existence of the Aborigines as a distinct people. As the Australian National University historian Peter Read defined the accusation: “welfare officers, removing chil­dren solely because they were Aboriginal, intended and arranged that they should lose their Aboriginality, and that they never return home.” 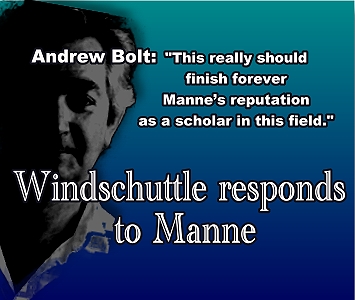 My book, The Fabrication of Aboriginal History, Volume Three, The Stolen Generations, (Macleay Press, 2009) challenges these claims. Robert Manne has now responded in three separate places — ABC Radio National, the Weekend Australian and The Monthly. In none of them, did he focus on the central charges above. He was unwilling or unable to engage in a genuine debate. Yet he knew that major sections of my book disprove the claim that the children removed were as young as possible or that they were removed from their families permanently.

In 2004, Manne announced he was writing a book on Aboriginal child removal policies in Australia during the twentieth century. Six years later, it has still not appeared. In September 2006 he posted on the internet 77 documents, apparently chosen from the research he had done. It was not an impressive collection. It is just 180 pages long (double-spaced typescript in twelve-point to make it appear more substantial than it is). For New South Wales, he reproduces just two pages containing a mere 650 words to supposedly represent state policy in the twentieth century. In Queensland, his primary source documents are entirely confined to the period 1903 to 1905, plus two memos from a public servant in 1934. Manne’s output demonstrates how little appreciation he has of the volume of primary research needed to properly address the topic.

In contrast, anyone familiar with the sources I have used will know they amount to several thousand pages — too many to count. The transcript of evidence of the 1935 Moseley Royal Commission, for instance, is 900 pages long. There are five times as many pages in just this one source than in Manne’s entire collection.

The truth is that Manne is an academic dilettante who has never done serious historical research on the numerous issues he has written about. I am far from the first to observe this. Manne’s practice is so well-established that even his friends are now publicly complaining about it.

There were no Stolen Generations