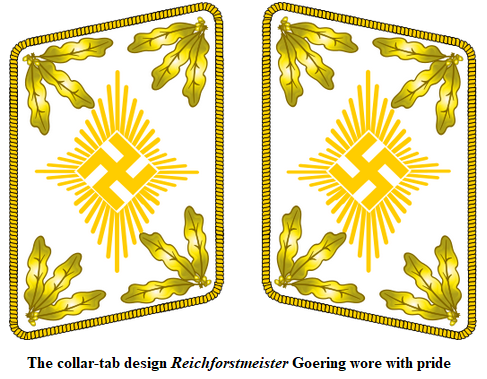 I came across a 2013 essay in my files the other day and thought I would give it another look.  It’s  Nazi Greens – An Inconvenient History. [i]  by Martin Durkin, who produced The Great Global Warming Swindle, which describes how the modern environmental movement dips its lid to the German Nazi Party.  But more importantly for this essay is Durkin’s explanation of how the green-thinking of the Nazi Party found its origins in the much older German phenomenon of the so-called ‘Volk’ movement.  [ii]

Reaching back into history, there was a rise in commercial activity and in the market economy in Middle Ages Europe, which was reflected in the growth of cities and towns. In England by the eighteenth century, this new city-based money resulted in a power shift away from the rural-based aristocratic elites to a city-based bureaucratic elite composed of burgers, lawyers, accountants, doctors, academics, priests, merchants and the like, and led ultimately to the establishment of a democratic parliament where the rank-and-file increasingly got to choose which of this new  elite was going to govern them.  However, at least theoretically, they did get some say in how the country was run. (Goodness me! Add in the media to the mix and we are pretty much describing today’s version of ‘parliamentary democracy’) This shift in power, from the aristocracy to the bureaucracy, was the essence of what’s called ‘the Enlightenment.’

In Germany, however, the old rural aristocratic elites managed to out-fox the city burghers by having their hereditary privileges underwritten by the State. The German State was eventually taken over by a bureaucratic class, but these formed an unelected elite who identified strongly with their feudal masters rather than opposing them.  However, in the long run, the German State could not completely isolate its ruling classes from the historic changes that were happening all over the rest of Europe.  By 1807 serfdom formally ended in Germany:

Feudal restrictions on trade and the mobility of labour were lifted. Peasants and burghers could now, in theory buy noble lands. …  The former humble obedient serfs were quickly becoming assertive towns-folk with money in their pockets. They could move jobs to find higher wages, they could gain promotion, they were courted as consumers, they could save and they could borrow, they could start a business.

But, while the old feudal aristocratic elites were in retreat all across Europe, in Germany they still had the support the State sponsored bureaucracy. In Germany, this bureaucratic and intellectual class still looked wistfully to the ‘good old days,’ of feudalism, lamenting the death of the old country values from which they too had derived great benefit. This reactionary German school of thought became known as the ‘Volk’ movement. Certain specific concrete examples emanating from the thinking of this backward-looking Volk movement come immediately to mind, such as the anachronistic fantasy castles of King Ludwig II of Bavaria, [iii] and the ‘ridiculous pagan fantasies of Richard Wagner.’ [iv]

In essence, the Volk movement sought to re-establish the feudal hierarchy with the nobility in their rightful position and the peasantry in theirs. However, the movement camouflaged its classist thinking behind a leafy screen of greenery. It linked peasant life to an idealised notion of a peasantry rooted (the idea of ‘rootedness’ is a recurring theme in Volkist literature) in the ‘land’, the ‘soil’ – at one with ‘nature.’  By contrast, deviation from this idealised version of a peasantry was considered ‘un-natural’, and therefore socially ‘unhealthy’ and ’degenerate’.

The Volkists despised capitalism, industrialisation, and urban development – anything that competed with their vision of a feudal rural idyll. They hated modern farming techniques and mass produced food. They romanticised a return to peasant life. Thus, now, we can clearly see from the shared vocabulary, the links between the Volk movement and modern environmentalism.

However, there is another aspect of the Volk movement thinking on ‘rootedness’, one which leads us directly into Nazism that should not be ignored. The idea of the value of ‘rootedness’ contrasted sharply with the ‘rootlessness’ of the ‘wandering’ Jew,’ who could never, in Volk movement thinking, join or be included in a ‘proper’ Volk.  Thus the Jews, who owned no land (because they weren’t legally entitled to do so) and could only maintain themselves by ‘capitalist’ pursuits of trading and in the finance sector in the cities, became the very symbols the ‘degeneracy’ of the urban areas and the evils of modern society. Thus was the Nazi hatred of the Jews foreshadowed in the Volkish anti-Semitism. It was the Jews that Hitler also blamed for the introduction of capitalism to Germany, the subsequent collapse of the Volkish feudal bonds and the degradation of the old German social order. 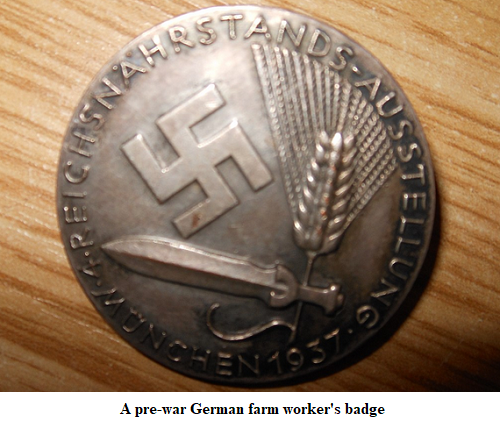 ALMOST as soon as the Nazis took power in 1934 they established environmentalism, explicitly including ‘organic’ farming and ‘sustainability’, as key agenda objectives of the Third Reich. The importance that Hitler placed on his new ‘green’ agenda can be seen by the garlanding of his most senior and then-trusted deputy, Herman Goering, as Reichforstmeister (Reich master of forestry) to oversee the implementation of a new law “Concerning the Protection of the Racial purity of Forest Plants”. The involvement of Hitler’s beloved SS also signifies the importance given to this agenda. Walter Darré, head of the SS Race and Settlement Office was made Reichsbauerführer (Reich peasant leader):

The Nazis attempted (unsuccessfully) to re-establish a Volkish peasantry by distributing free plots of land to workers, and it was this that sent the German army into Poland, and beyond, in search of lebensraum (living space), made available by the mass slaughter of east Europeans. It was Darré, who said he wanted to breed a new rural nobility…    [v]  [vi]

Of course, we can all see that the contradictions in the Nazi’s policies fared no better than the policies of The Greens today, as organic, peasant-farming practices proved just as inefficient as they had in the Middle Ages. However, …

… the fact that the absurd green fantasies of the Nazis were impractical did not seem to disturb them, as indeed it seems not to disturb greens today. Perhaps this was because every bit of green legislation justified and involved a further extension of planning and state intervention.

In his essay Durkin asserted that his own motives for exploring the links between Nazi philosophy and environmentalism were not inspired by political point-scoring against the greens movement.  Nor is that my purpose here either.  It goes much further, as will be covered in the forthcoming Part II of this essay.

[iv]  That’s Durkin’s words, but who could possibly disagree?

[v]  I’m sure all the Nazi propaganda footage of good Germans frolicking in the wheat fields will be familiar here.

[vi] And we have probably all seen the astonishing footage of the Teutonic knight-style pageantry of the SS guards at their school in Wewelsburg Castle.  Consider also the SS and the “Knights of the Black Sun”.

“He (Heinrich Himmler) even installed a round table, coats of arms for his SS ‘knights’, and pagan ceremonies exalting his movement above all other world religions.”

[x]  The World Economic Forum, or as Mark Steyn calls them, “Klaus Schwab’s Spectre Board Room.”  Hmmm?  I think the link with the James Bond movies is particularly apposite – “Spectre; a commercial enterprise that seeks to instigate conflict between two powerful enemies, (the socialists and the liberals?) hoping that they will exhaust themselves and be vulnerable when it seizes power.” (paraphrased from Wiki)  There is a whole essay to be written there too.

[xi] Anthony Sutton, 2010. Wall Street and the Rise of Hitler: The Astonishing True Story of the American Financiers Who Bankrolled the Nazis.

[xii]  2001, Edwin Black.  IBM and the Holocaust : The Strategic Alliance Between Nazi Germany and America’s Most Powerful Corperation.  https://en.wikipedia.org/wiki/IBM_and_the_Holocaust

[xiii] Durkin, as quoted in the first section of this essay.

[xv]  Alexander King and Bertrand Schneider, 2991. The First Global Revolution: A Report by the Council of The Club of Rome.        https://en.wikipedia.org/wiki/The_First_Global_Revolution

also “Climate change policy is about how we redistribute de facto the world’s wealth.”

[xxi]  Durkin, as quoted in the first section of this essay.

[xxii]  Watermelons : green on the outside and red in the middle.

[xxiii]  How amusingly ironic that an agenda promoting a return to a ‘Call of Nature,’ fantasy, peasant life-style should be taken up so enthusiastically by inner-city elites, the bourgeois group most despised by the ‘Volk’ movement!  Remember all those old Communist posters of landscapes all crisscrossed by a network of power lines?  Hardly a ‘green’ image, I would have thought?

[xxv]  My old Marxist friends all rail against the “Greens” and their deviation from genuine Marxist economics.  Out others include, for a start, the likes of Pascal Bruckner and Helen Puckrose. But how about Marxists Russel Brand and Glenn Greenwald? Very amusing!

But I think Bill Maher might be spotting it too?   https://wentworthreport.com/2022/05/22/the-lgbt-population-of-america-seems-to-be-roughly-doubling-every-generation/