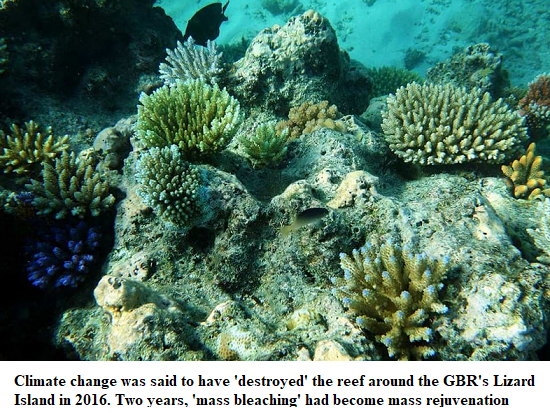 Contrary to the incessant bleating of office-based Great Barrier Reef “experts” (who visit the Reef a couple of weeks in a year), the reported incidents of coral bleaching are nothing new, unusual or threatening. They are common natural event no more threatening than trees shedding their leaves with the changing seasons, or occasionally in response to a dry spell.

1/ Tropical ocean waters are generally nutrient poor and the symbiotic algal cells which give corals their colours are living near the lower nutrient limits for healthy plant growth. Their metabolism is sensitive to temperature and to achieve high efficiency it is fine-tuned to an optimum temperature range of only few degrees. Different strains of the algae are optimised to the differing seasonal temperatures and geographic regions.

2/ The strains of algae living in the tissues of corals change in accord with seasonal changes in water temperature. Such changes are usually gradual and the change in algae is not visually apparent.

4/ If a temperature change is only brief, as in the wind returning after a calm period, the expelled algal strain may just be re-established.  If the change is seasonal, a new strain of algae may replace the previous one. Such recovery can be relatively quick. A few weeks after a bleaching event, corals usually appear normal again.

5/ Bleaching mostly affects shallow reef areas where it is also conspicuous. In deeper channels and on the edges of extensive shallow reef flats where tidal flow of warm water off shallow areas occurs, some beaching may extend a few metres deeper. Extensive reef areas at depths below about 10 metres are generally unaffected. The vulnerable shallow areas are also subject to occasional devastation from storms, floods or even just a good rain if it occurs when corals are exposed by a low tide.

6/ Bleaching attracts attention. But the surveys and news reports tend to ignore the rapid recovery a few weeks later. At the extremes, severe bleaching, like severe droughts on land, can result in extensive mortality. Fortunately, this is rare.

7/ The previous widespread bleaching event in 2017 was claimed to have reduced coral cover on the GBR by 50 per cent. However, the most recent survey, in 2021, found the highest level of coral cover ever recorded in the three and a half decades of the survey record. Corals do not grow that fast. They only grow a few centimetres in a year.  The previous claim of a 50 per cent reduction in coral cover was grossly exaggerated. Most of the corals simply recovered.

8/ It is also worth noting that the average sea surface temperatures on the GBR are a couple of degrees cooler than they are in the Coral Triangle area of northern Indonesia and the southern Philippines where coral reefs reach a peak of biodiversity found anywhere on Earth.

9/ It is further worth noting that there is no sound evidence of increasing warming on the GBR over the past century. The best temperature record we have from the region is from the Willis Island weather station. It shows no increase between monthly high temperature averages from 1930-1960 compared to 1990-2020.

10/ Numerous peer-reviewed studies from widespread reef areas clearly indicate that seasonal changes in the zooxanthellae in corals is normal and occasional sudden changes in temperature often result in varying degrees of temporary bleaching.

11/ Various other studies have also found that bleaching leaves growth rings in corals which can reveal the age, intensity and even the temperature of these events. These records show that bleaching has been a common occurrence over all time scales — from decades, to centuries, to millennia — and even to millions of years. There is also no evidence to indicate any statistically significant recent increase in the frequency or intensity of bleaching.

That we have only recently become aware of such things as bleaching events, mass spawnings, population blooms, and internal waves bringing surges of cold, deep, nutrient-rich water onto steep outer reefs is not because these are unprecedented. The discovery in the past few decades of hundreds of species of reef creatures that were new to science is likewise not because they did not exist for eons before.  This is all simply a reflection of the still very limited level of our experience and understanding of these richest of all communities of life.

The GBR is not dying or even threatened.  Over its vastness, across its wide range of conditions and habitats, and amidst its endless diversity of dynamic interactions there are always times and places of detriment and decline along with a prevailing condition of luxuriant natural beauty and flourishing life.

We see what we look for and look for what we wish to find.  Most visitors to the Reef find an overwhelming experience of natural beauty and flourishing life.  For a small, but noisy, minority of activists, academics, bureaucrats, and the legions of the righteous, threats to the Reef bestow a cornucopia of attention, funding and self-importance, along with a delicious sense of moral superiority.  They, too, see what they want to see.

Finding, promoting, investigating and pretending to “save” the Reef has become an attractive industry offering a permanent full-time, all-expense-paid Barrier Reef holidays with very modest duties, excellent job security and pension benefits.  There is now a whole  generation of Reef salvationists whose entire experience of the Reef has been focused on threats, leading them to perceive every fluctuation of nature as evidence of their fears. Although they profess to be terribly concerned about the threats, they take no hopeful interest in evidence anything may not be as dire as they persist in claiming. Their angry rejection of any suggestion that optimism is justified makes it appear the true commitment is more to hyping “threats” than it is to the Reef itself.

With war and pestilence running free in the world, crime and homelessness flourishing and spectres of famine and economic chaos flickering on the horizon, hysterical demands for vast increases in funding for hypothetical solutions to imaginary threats are beginning to look increasingly self-serving, irrelevant and grossly dishonest.

Walter Starck is a marine biologist and regular Quadrant contributor